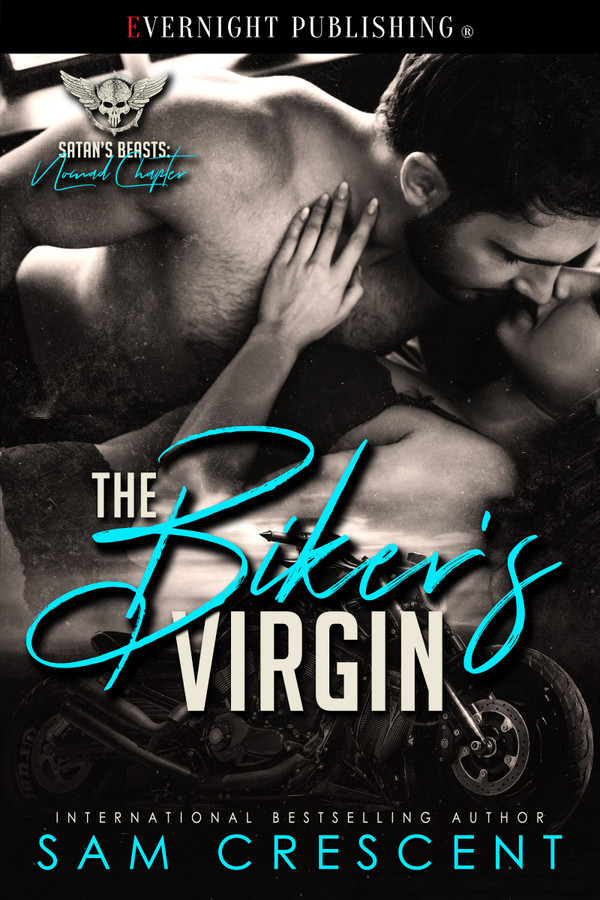 Colonel isn’t expecting to fall for any woman, but with one pitstop in a small town, that’s exactly what he does. She’s being attacked by a man, so he takes matters into his own hands and he protects her.

Piper Dawes is used to men thinking she’s easy prey and she doesn’t expect the angry-looking biker to make her feel safe. He’s not staying for long, and she has no intention of falling for him.

However, he’s not leaving until he’s had her, this untouched virgin. Only, one taste is never enough.

Colonel is a nomad, and his club has no home—just the open road. He’s found the woman for him, but can Piper leave her family and predictable life behind? Will she follow him? Or is this a fling that will leave them both burned?

She looked away from him, and all he wanted was for her gaze to be on him. Finally, after what felt like a millennium, she looked up and glared. Her shoulders squared as if to do battle.

“What happened to your father?”

“So what was going on with Dave last night?” Just the name rolling off his tongue made him want to commit murder.

“Just because I’m not like my family doesn’t mean others don’t think I am. They try to take what isn’t freely offered. No one would for a second believe I was a virgin.”

The moment she spoke those words, Colonel was determined to be the first and only man between her spread legs. She covered her mouth with her hand as if she’d said something disgusting. “Forget I ever said that.”

He advanced toward her but she stepped back. It was his look. She’d come to a board with advertisements on it that stopped her from leaving him. He put his hand either side of her head, caging her in. Some of her wild hair was behind his hands, and he didn’t mind keeping her in place. If she moved, she’d cause herself some pain, but he had no interest in hurting her.

He wanted her to know that he wanted her more than anything. Staring into her eyes, he smiled. “You really shouldn’t have said that.”

“Don’t lie to me. Your honesty is refreshing. I have no interest in lies. You’re a virgin? No man has ever touched this virgin pussy?”

He didn’t put a hand on her. Her lips called to be kissed. He wanted to fucking take her but instead, he held back, not wanting to overwhelm her. Piper was used to people taking what she didn’t want and he wasn’t about to start up now. He had no interest in hurting her. What he wanted from her, he’d get it, but he had patience and rushing her wouldn’t work.

She shook her head at his question.

What had he asked her? Oh, yes, if no man had ever touched this virgin pussy.

“I think it’s time I take you home.” He stepped away from her and climbed onto his bike.

“You don’t want anything else?”

“When I want something, I’ll ask for it. For now, I don’t want anything.” He winked at her.

“I wanted to find out what you were like and now I have my answer.”

“It doesn’t make any sense,” she said.

“Come on, get on. We have a deal, don’t we?” He promised to get her home then to the bar for yet more work. Didn’t this woman know how to play? He had a feeling she didn’t. He’d teach her how.

She hesitated for a split second before rushing toward him.

He waited to ride until she’d gotten comfortable. “Tell me where I’m headed once I hit town.”

Piper hates how her mother and sister allow the men in their small town to use them as if they were disposable. That’s not the life Piper wants and she hopes she can keep everything together long enough to get out of town. When she’s rescued from a horrid situation by Colonel she’s grateful, but understandably cautious. Can Colonel convince her that they belong together? This is a hot and sexy quick read. I enjoyed Piper’s character – wanting more than just to be painted in the same brush as her family but unsure how to break out of the mould when she was stuck in such a small town with narrow minds. I was really impressed that Colonel didn’t feel the need to intimidate or coerce Piper in any way. I’m often not a fan of MC stories because I feel they flirt just a little too close to the darker side of erotic stories but this one really appealed to me. Colonel respected Piper and was intrigued by her – wanted to get to know her and while he didn’t appear to want anything lasting for quite some time into the story, he also didn’t simply want to have sex and then ditch her. I really feel the author did a good job balancing the harder edges of a realistic MC romance with the softer and more respectful aspects of an erotic story. I also really enjoyed Piper’s perspective – yearning for more than her small town and gossiping neighbors could give her, but still showing loyalty and caring to her mother and sister. In many ways this book ticked a lot of good boxes for me and I thoroughly enjoyed the story simply for what it was – the story of two independent people attracted to each other and slowly learning how to forge a relationship between them when things were complicated. I felt the ending was a little bit rushed but aside from that this was a wonderful short story with a good balance between Piper and Colonel getting to know each other and circle one another and them consummating their relationship. Equal parts sexy and emotional this is a good, quick read. Recommended

I am in love with this couple they are amazing and explosive together made laugh and made me cry. And it hit me I think it end with Boss? Man I want more.

Killer of Kings has been one of my favorite series written by these two amazing authors! Through all the books I have always wondered about Boss and when he would get his story. Sam and Stacy did an awesome job of bringing two essentially broken, but strong people together for a HEA that is fitting for two people that endured tremendous amounts of pain and suffering. Boss is filled with action, redemption, and some smokin’ love scenes. Now I am patiently waiting to see if the lovely authors will write another one!

This was a cute, short and sweet love story. It was also steamy. Small sexual assault in beginning but MC is there defend heroine. MC older by like 19yrs, her 21 yrs to his 40 yrs if I recall. Heroine had good relationship with mother and sister, just she wanted different life from them. Hero wants heroine from beginning but isnt insta love. It still develops into love pretty quick and novel is quick read for me. Enjoyed it. Something easy with steam to read, without too much emotional drama being dragged out.

No club &quot;business&quot;, but a short, sweet and spicy story. Loved it!!

The start of a new MC series, The Biker&#039;s Virgin is the latest from Sam Crescent. There&#039;s not much drama in any way at all. Just the story of how Colonel and Piper get together. There is an age gap so if you don&#039;t like those stories, this may not be for you. Colonel and his men are nomads who just travel from place to place without staying in one place too long. As soon as they role into town, they rescue Piper from a drunk guy and Colonel knows that he wants her. Their connect is instant for him but it takes her a little bit longer. I loved how protective he was of her and how the other MC guys respected her. The story is short and an easy read.

This is the story of Colonel the President of the MC and Piper local girl. Colonel leads a bonus MC. Piper lives in a small town where her mother and sister have bad reps. This is a short age gap love story. No angst just a sweet read.