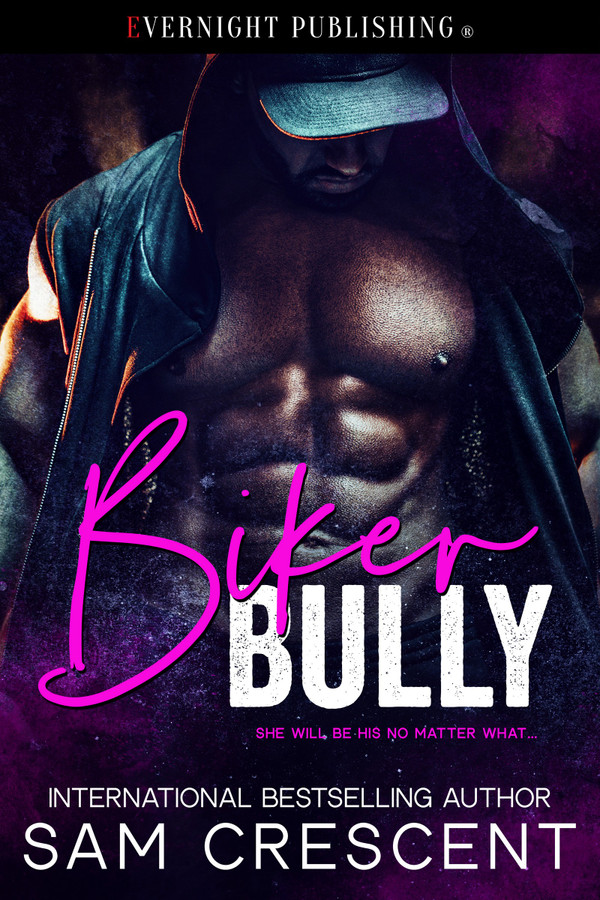 Chloe Decker has never fit in. Her father is considered a coward by the local MC. She’s the coward’s daughter and public enemy number one. When the president’s son, Alfie, and his friends bully her, she knows something bad will happen.

Alfie is determined to bring Chloe down. She thinks she’s better than all of them, but he’s going to show the town, and the club, she’s nothing. Only, he’s the one being taught a lesson. Chloe’s not faking anything. Slowly, Alfie begins to see the real woman beneath the bullying.

He’s not going to ruin her. He’s going to show her what it means to belong to him.

But someone is determined to keep them apart. When his original plans are shown to the entire town, Alfie loses the respect of the only girl he’s ever cared about.

Chloe promises to never return, but when her mother is run over by a car, she has no choice. She has to face the demons of her past. It doesn’t mean she will fall for Alfie’s tricks again.

Alfie’s finally got her back in town, and this time, he’s not going to risk losing her. He’s not the dumb biker kid anymore; he’s a man, and this man doesn’t let the woman he loves get away.

“You winced at an alcohol wipe.”

“I said I don’t need stitches. I didn’t say anything about not behaving like a baby over it. Come on, I can handle it.”

She smiled and cleaned him up.

“So that kiss, huh? Would it be natural of me to think that was your first one?”

“Why do you have to make everything sound so dirty?”

She rolled her eyes. “Yes, you were my first. I had to figure out a way of getting you to stop punching him. I didn’t want you getting in trouble for me.”

“I just don’t want you to get in trouble. I’ve dealt with more of this, and I’m fine with it. There’s no reason you should be dragged down. I don’t think your dad would be happy about coming down here to deal with you.”

“He’d be happy to know I was doing it to defend you.” He reached out and pushed some hair out of the way.

“You’re sure? I’m not feeling the appreciation here.”

“I stopped you from getting suspended or your dad coming here. You got a kiss out of it as well, and I fixed your face.”

“I wasn’t able to enjoy the kiss.”

“I thank you, but I think you should kiss me again.”

“I’m your savior. I’m your personal knight in shining armor or whatever bullshit that is called,” he said.

“You’re really going to use that as a reason to get another kiss?”

“I’d rather use no reason and just have you kiss me, but I don’t seem to be getting what I want.”

“You want me to just kiss you?”

“It’s what normal people in a relationship do.”

“We’re not in a relationship.”

“You’re hurting my feelings, Chloe.” He put a hand over her heart, and as she put away the first aid kit, he took her hand. He pressed his lips to her knuckles and smiled at her. “I’m wearing you down. I can see you want to kiss me. You do.”

She laughed. “You think I don’t know where you’re going with this? I do. I can see right through you.”

He cupped her face, and before she knew what was happening, his lips were on hers. The kiss seared right to her soul, and any laughter died as he actually kissed her. It was slow at first, exploratory, and changed within seconds as he ravished her mouth.

After only a few seconds, but felt like longer, he pulled back. “That was the first kiss I should have given you.”

“You want to take her on a date?” Lily asked.

She was walking around the supermarket, picking up some fresh produce.

Alfie had been on his way to the clubhouse when he saw her.

“Yeah. Me and her, doing something together.”

Lily put the peppers into her trolley and frowned. She opened her mouth and closed it. “Why are you asking me?”

“Believe me I know, and I can’t say that I blame her.” Lily tilted her head to the side.

He didn’t know why he thought this would be a good idea. Getting her mother to like him would only allow Chloe to trust him more, right?

“We haven’t always been close.”

“I know you bullied my daughter, Alfie, and I’m not going to give you permission to date my daughter. I don’t trust you.”

“I’m proving to you that I care. That I’ve changed.”

“No one does that quick a turnaround. Believe me, I know about men and their behavior. You want to date my daughter, fine. You will come to dinner tonight. You and your father and I will see if you have the right personality for my girl.”

“Seriously? You’re going to do this right now? When I’m proving to you that I’m different. I help her at school. I’m stopping all the bullying.”

“That I imagine you helped to start in the first place. I’m not blind to everything going on, Alfie. I’ve given you the conditions for you to date her. Take them or leave them. I will never be the one to encourage my daughter to go on a date with her bully. Not now, not ever.”

Alfie watched her as she grabbed the shopping cart and moved on. This wasn’t exactly what he had planned.

Chasing after Lily, he stood beside her. “You’re not going to budge on this?”

He gritted his teeth. “Four.”

“You better check with your father first in case he won’t make it.”

This is an amazing novel! The reader gets to meet Alfie and Chole in high school. Alfie is the son of the local MC President (Eagle) and Chole is the daughter of Kurt and Lily. Alfie has been bullying Chole since they were young children. When Alfie comes up with a plan to take Chole down, he falls for her instead. But the path to true love

To be honest, the first part of the book was kind of hard for me to get through. The writing is awesome but the storyline with the bullying was tough. When the heroine finally stands up for herself after being bullied by the hero and his buddies, what starts out as revenge slowly turns into something he didn&#039;t expect. But when what they did is exposed to the whole town, it sends Chloe running away as school as soon school is out, and Alfie knows he has messed up big time. Years go by and when Chloe&#039;s mother is hurt by someone who is after her, she returns to town to take care of her and to a changed Alfie. Both have grown up but both still need to deal with issues from their past. Can Chloe come to understand how Alfie has changed? Can Alfie win back the only woman he ever loved? And will they catch who is trying to hurt Chloe&#039;s mom and anyone who loves her? This kept me turning the pages to find out just how far Alfie was willing to go to win her back and to see if he had truly changed. Several secondary characters were also there and I would love to see Ian and Riley get their stories told at some point!!! All in all, I really loved this latest book by Sam Crescent!

I loved the book so much I couldn&#039;t stop reading I just finished the book it was so good Sam your just awesome

Sam never disappoints with his books. Your characters are always flawed and real yet beautiful and redeemable at the same time. Loved Alfie and Chloe’s story so much and Lily and Eagle were an amazing bonus.