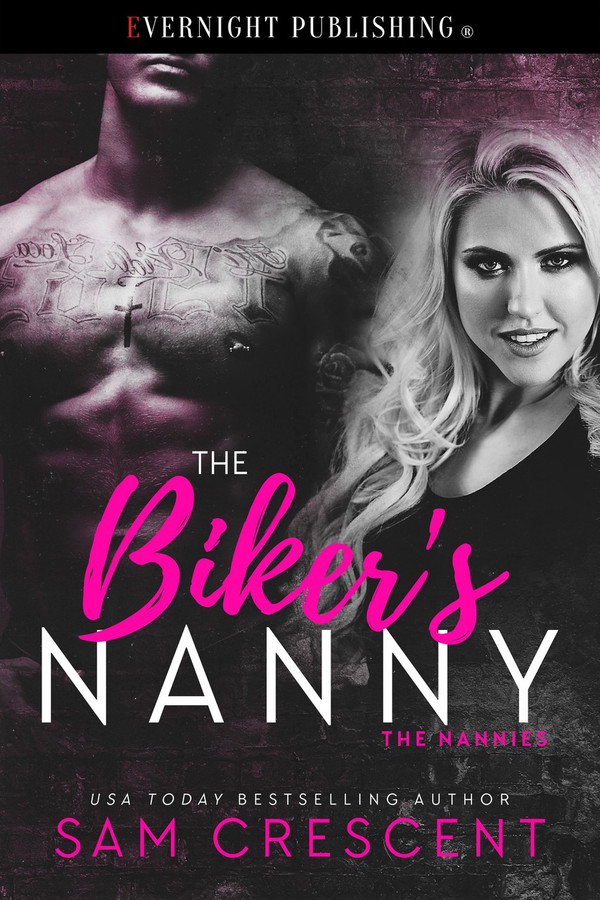 Hawk needs a nanny for his nine-month-old daughter. He can’t sleep or do his job when it comes to his club—who need their Prez. He doesn’t trust anyone with his little girl, so he has no choice but to go to a reputable agency to find the right woman.

Jasmine knows all about heartache. With one divorce under her belt, it takes a lot to shock her, which is why she doesn’t walk away from a job interview at an MC clubhouse. The job is simple, take care of Hawk’s baby girl. Easy. Or it should be…

But Hawk’s not like other men. She’s attracted to him, and that’s very, very bad.

Hawk’s not used to holding back. But when it comes to Jasmine, he knows he can’t have her. The only problem is he’s not good at being told he can’t have what he wants.

So, fuck the rules. He’s going to have her. One taste is all it takes for him to know she’s the one. There’s no going back. She will belong to him. He just has to convince her of that.

“Why do they think I’m your old lady? Renee told me that some of the other … women hate me because you’ve made this declaration of some kind. I don’t understand it.”

“It’s more than that.” He wasn’t going to sit and listen to her try to make out that there was nothing going on between them.

The first day they met, he felt something.

If it hadn’t been for Bethany or the fact he was interviewing for a nanny, he’d have taken her out on a date or at least done something. Instead, what he’d done was let her go. When she entered his clubhouse, he’d known his chance was over with. The company he’d been using had told him their views on relationships between clients.

Fucking the nanny wasn’t going to be an option.

It had only been a month, but that was more than enough time for him to know what he wanted and who he wanted.

Jasmine took a step back.

With each step he took, she moved back until she hit the wall.

Slamming his hands against the wall, he saw her jump.

He saw her eyes dilate.

He glanced down her body, and the shirt she wore was like a second skin over her tits, her hard nipples pressing against the front.

“You feel this, Jasmine. I won’t listen to you say otherwise. I know you do. I can see that you do.” He cupped her cheek, tilting her head back.

“They won’t find out. Not right now.”

“Your job right now is to take care of Bethany and me.”

He saw her fighting this. “Okay, we’ll play this your way for a time, but I will warn you, I don’t play fair.”

Before she could say anything else, he slammed his lips down on hers, silencing her.

She released a moan. Her hands gripped his hips, and she was running them up his chest.

Cupping her hip, he caressed down to her thigh, lifting it high on his hip so that he could rock his cock against her core.

She gasped, and he plundered into her mouth, tasting her.

Breaking from her lips, he kissed down her neck, sucking on her tender flesh. She was so fucking tasty. His cock was rock-hard. He wanted inside her, fucking her hard. Instead, he held off, waiting, listening, and then he heard that groan, the one that told him she was hungry and desperate for more.

That was all he was waiting for.

Pulling away, he gave her a smile.

“Then maybe you should make a decision as to whether you want to be my old lady or not.”

This author is a favorite of mine and after falling in love with her Chaos Bleeds MC series. I had to check out another MC novel. I enjoyed watching Jasmine &amp; Hawke fall in love.

I don&#039;t normally buy books from authors I haven&#039;t read, but the blurb pulled me in. The book was amazing. A dirty biker romance without getting too dark. The couple had chemistry and love from the start. I would like this to be a series. Good job, I&#039;ll be 1 clicking more from you!

Wow. This was a slow simmer at first and then bam! The author turned up the heat about a million degrees. So hot. I should have worn sunscreen while reading lol I could feel the burn. Super Hot biker dad with dirty mouth and a long, girthy...kickstand on his seriously impressive bike. Don’t I want a ride, yes, yes I do. The nanny was cute and so was the baby. I liked how she handled herself and him. Totally recommend this book. Oh, I didn’t read books 1&amp;2 but plan to go back and read them now.

Let me start by saying I love Sam Crescent, she&#039;s an amazing author and when you read her books you&#039;re not disappointed at all. This story is really good, it didn&#039;t take long for Hawk the bad boy alpha to fall hard for his nanny. The way Hawk is with his daughter is beautiful and adding Jasmine to the mix is great. This story may have been short but you can&#039;t put it down until you&#039;ve finished it, when this author write her stories she has the ability to make you want to be there to witness the way the story unravel, that&#039;s how good she is, AMAZING JUST AMAZING! I&#039;m giving it 5 stars because she deserves it and I would definitely recommend it to anyone

Lordddddd I have been waiting for another curvy gal nanny story! Or just more curvy gal stories!! Thank you sam!! Now onto the reivew Hawk had to well off his baby mama since she was trading club secrets and not taking care of their little girl. Knowing he needs help he needs to call a nanny or someone to look after his daughter.. thanks to a club whore he gets a number.. before even meeting the nanny he meets Jasmine at the supermarket alittle bonding they soon part ways. Few hours later he finds out Jasmine is the new nanny or she shall be the new nanny the sexual tension Hawk feels for her but he made a promise not to bone her even if he wants to so badly.. also jasmine hasn&#039;t had a good life in awhile divorced can these two people catch a break?!? But not all is rainbows and pizza.. (yes pizza) being the president of a MC is hard work and deadly.. guns are blazing, to be a old lady or not to be..

I Love this Nanny Series, and bonus it has a biker in it. I love Biker Stories :-) Hawk needs a nanny for his nine month old daughter as her mother met an untimely &#039;accident&#039;. So he hires Jasmine. But they met before when she helped him at the grocery store shopping with his daughter, and he was attracted to her, but now that she&#039;s his nanny that just can&#039;t happen. Jasmine didn&#039;t know what to expect when she pulled up at the biker&#039;s home. What she also didn&#039;t expect was the hottie biker she met at the store and had been having some dirty fantasies about. But now she was his nanny and there was rules against sleeping with your boss and he is the prez of the MC, and that can&#039;t be good??? So that&#039;s that, nothing can happen, right...... I enjoyed this one, there was some steamy scenes, some action, lots of drama, but a hot alpha male and a sweet curvy girl what more do you need? Hope there is more in this series :-)

You have to love a hot and steamy read about a MC President doing exactly what he said he wouldn’t do... fall head over hills for the nanny!

What a great book!! Loved Jasmine. She wasn’t a prude but had certain ideas and stuck to them, except for when it came to the hot biker. And it was great how she met Hawk &amp; Bethany. Hawk was blindsided her a few times. He expected one reaction and got the opposite. They were awesome together. Really liked this book a lot!!!

This is one of my favorites of Sam&#039;s in her recent releases. Hawk loves his daughter but won&#039;t acknowledge his feelings for her nanny until he sees her get hurt. Jasmine loves children and has been a nanny for since her divorce. While she has feelings for Hawk, she doesn&#039;t think she can compete with his MC club. He&#039;s the President of the club and there is always danger around but his daughter is adorable. Can they make their relationship work, even under danger that she will lose her job if she gets involved with Hawk? And what of the danger to the club? There is a bit of drama from the club girls but not much and there are secondary characters I would love to see get their stories told. I really loved this book and am looking forward to more in this series!

I was looking forward for this book. MC stories is one of my fav by Sam. And this one was just as good. It has a bit of action and lots of hot scenes. I loved Hawk. He was protective dirty talking alpha.