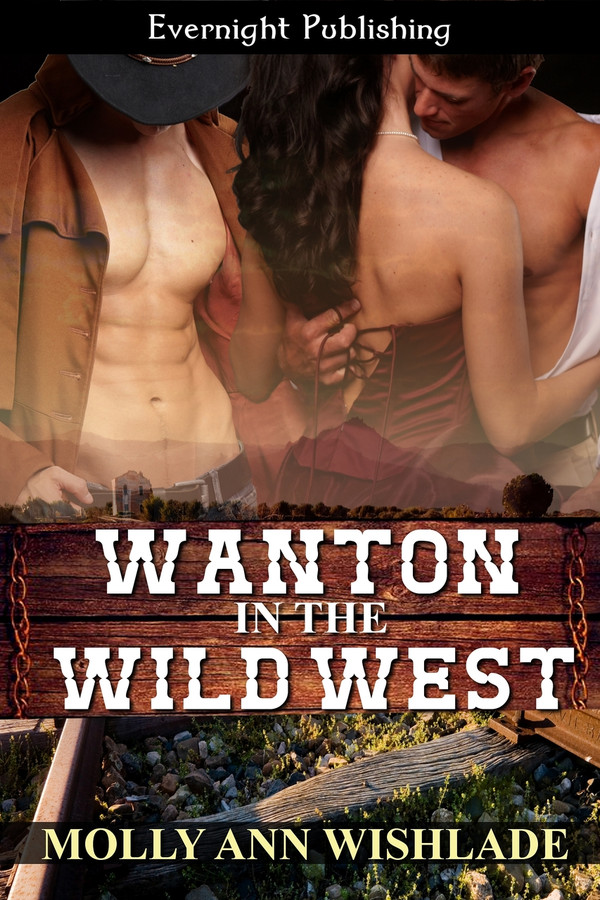 Sometimes a train journey can take you in an unexpected direction.

It is 1890, and the Chicago and North-Western Railroad now runs into Deadwood. After a year in Chicago, Amber Carpenter is homeward bound via steam train, escorted by two gorgeous cowboys. Amber swore a long time ago that she would never let a man hurt her, but that doesn’t mean that she’s not open to the idea of some fun.

Harry Delaney and Gideon Swain have their sights set on a bright future … if only their tragic past wasn’t holding them back. But from the moment they laid eyes on Amber Carpenter, they knew that there was something different about her.

Can the three of them turn their lives around within the space of a train journey?

Amber stirred and opened her eyes. She blinked rapidly trying to clear the disorientation she felt.

She was naked. Outside. Wrapped around a naked man.

She lifted her head and looked into his hazel eyes.

“Hey there, beautiful!” he whispered, then leant towards her and kissed her softly.

She enjoyed the warmth of his lips on hers, the feel of his strong, hard body, and the growing erection, which pressed into her belly.

“Hello, Harry.” She smiled then realized that the day was cooler. The sun was lower in the sky. “Shouldn’t we be getting back? Before we’re missed?”

Doubt flooded into his gaze, and she wished that she could withdraw her words.

“If that’s what you want. We’ve not been gone all that long though, and they’ll call. Or Gideon will come looking once they’re ready to go.”

Amber placed her forefinger over his lips.

“Okay. Then what do we do while we’re waiting?”

Harry kissed her finger, and then his lips curved into a broad smile. “I can think of a few things.”

He rolled her onto her back and started to kiss her. Amber stretched out, savoring the exquisite sensations shooting through her limbs and flooding her body. She was amazed at the effect that this man had upon her. Just a touch or a kiss could set her skin on fire and her heart racing.

Was this just a physical reaction? Like the engine of the train, which was powered by coal or wood, were her feelings for Harry just powered by lust and desire? Or was there something else unfolding here? Something out of her control that could threaten her very resolve to remain single and independent.

His insistent mouth worked away her fears and her confusion, and she surrendered to him. His mouth on her breasts, his skilled fingers working her clitoris, and his erect cock as it pressed into her leg all took her further away from rational thought.

Then he moved his hand lower. Amber gasped as he tenderly probed between her folds and found the tight hole that led into her body.

He looked up from her breasts for a moment, seeking her approval, and she nodded at him. She wanted this. He returned to suckle her breasts, a feeling so delightful that she felt as if something inside her moved in time with his mouth. She gasped when she felt him inside her, touching her secret place tentatively with a finger. As he moved it in and out, Amber sighed and entwined her hands in his hair. She moved her hips in time with him, enjoying yet wanting more.

When he slid in another finger, she felt her opening stretching. A slight burning. Then nothing but incredible intense ecstasy. So many new and wonderful feelings! He plunged into her then withdrew before plunging again.

She moaned as he covered her clitoris with his mouth, cradling her bottom in his left hand whilst working inside her body with his right one. And she began to ascend again, her excitement winding up inside her like a coiled spring until suddenly it burst from her with a hot gush, and she throbbed into his mouth, time after time after time, riding wave after glorious wave of delight.

Harry continued to kiss her pussy for a while, running his tongue over her silken folds and sucking at the place where he had entered her, and she shivered with delightful little aftershocks. Then he climbed up her body and lay over her, resting on his elbows. His face was shiny with her juices, and his eyes shone with lust and something else, something so intense that it made her heart flip.

“Harry,” she whispered as she cupped his bristly chin between her palms. “Thank you.”

“My pleasure.” He grinned.

“No.” A deep voice emerging from the trees startled them both. “My pleasure!”

Harry pushed himself up to his knees, and Amber rolled onto her belly, trying to hide her nudity.

“Gideon.” Harry smiled. He jumped to his feet and hurried towards the other cowboy.

Wanton in the Wild West is a sizzling novella that will leave you breathless. The characters are intriguing and their relationship goes from ember to flame in just a few delicious pages. Though their lusty encounters are heated, Wishlade also infuses them with emotion and manages to develop a relationship between Amber, Harry, and Gideon in a few very enjoyable pages. When Amber Carpenter takes a train from Chicago back to Deadwood, she is intrigued by the two handsome cowboys who share her train car. Curious and passionate, Amber allows Harry to introduce her to pleasures she never imagined. When Gideon joins in too, they each find that together they&#039;ve found a bliss that eases old wounds and may just be the future they&#039;ve been seeking.

Bound to the Bad Boy by Molly Ann Wishlade