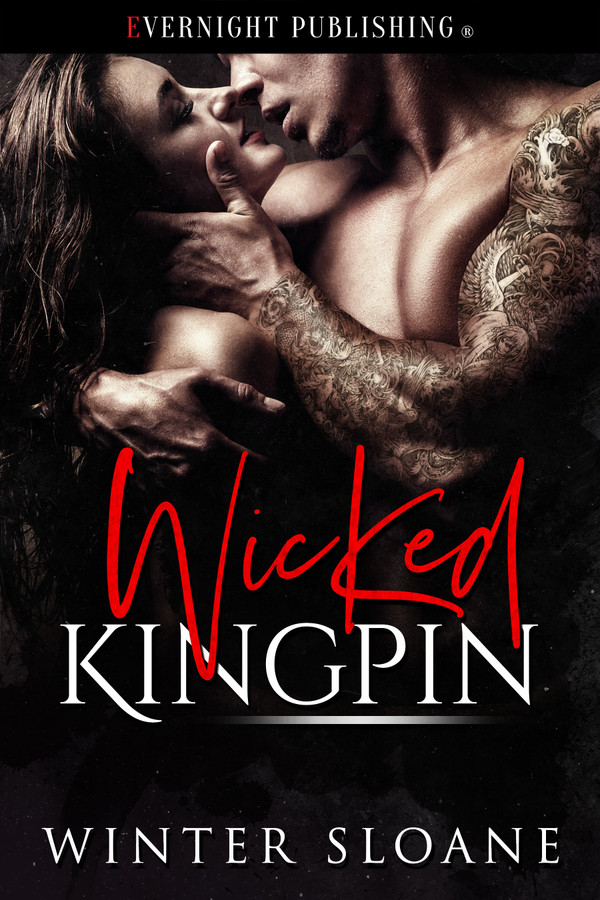 When her traitorous brother loses Leah Taylor in a game of cards, Leah tastes despair for the first time in her life. She’s spared from a fate worse than death when Knox Carter takes an interest in her. Knox rules the city with an iron fist and he doesn’t take no for an answer. Knox is a monster. He claims Leah is now his property but he treats her like a queen. Leah can’t fall in love with a mobster, but once he conquers her body, she knows her heart won’t be far behind.

One look and Knox’s become obsessed with the curvy waitress with the fire in her eyes. Knox’s not a good man. He’s mauled down numerous corpses to create his empire. He’s not afraid of bloodshed. Taking a woman was never part of his plans but Knox is beginning to change his mind. Every king needs a queen and he knows Leah’s the goddess he’s been waiting for his entire life.

Leah thought she had been saving herself for the right man to come along. Maybe there was no time like the present.

“Lie down on the bed,” Knox ordered.

“Scoot down a little. There. Perfect,” Knox said.

Leah lay there, unsure of what to do. He neared the bed, lifted her left leg, and took her sneaker off. He did the same with her right foot.

“Hush, kitten. Relax. Tonight is all about you and you alone.”

Her socks came next. To Leah’s embarrassment, she noticed they were mismatched. Knox didn’t seem to care. She began to wonder what he meant by his words.

Knox hooked his fingers into the belt loop of her jeans and tugged them down, exposing her legs and her fiery red lace underwear. It had a white bow over the crotch area.

“I appreciate a woman who loves lingerie.”

“It’s laundry day. I didn’t have anything else to wear,” Leah said.

“You can try going commando sometimes,” he said with a wicked laugh that made her nipples harden.

Knox traced the shape of her pussy lips with two fingers, making Leah squirm. She suddenly imagined him ripping off her panties. To have no barriers between them.

He took them off, slowly and carefully like he had all the time in the world. Leah thought a man like Knox would lack patience. She assumed he wouldn’t bother with any foreplay. That he’d just rip off all her clothes and get what he wanted. She was so wrong on many levels.

This man was a puzzle. A complication. No wonder people were scared to cross him. Leah wouldn’t want Knox as her enemy.

“I’ve been dreaming of doing this since I saw you at the poker table,” he said.

“Doing what?” she whispered.

The urge to close her legs arose but Knox settled himself between her thighs.

“Taste how sweet you are.” Knox lowered his head and looked at her cunt for a few moments, smiling all the while. “Look at that pretty pink pussy. Tell me, Leah. Have you recently touched yourself?”

Leah runs to rescue her brother once again and he uses her as collateral in a poker game. The nasty men who win her have made her fate clear to her. Just when she believes her future is limited and likely to be hell, in walks her savior. Knox is the man everyone knows and fears, and he likes it. When he walks in on a low-level poker game, he finds his queen and he takes her for his own. Little does he know Leah is unlike any woman he has ever known and he fears she will be able to tame the beast. Leah is looking at doom and gloom until Knox walks in. She begins to wonder if he is the devil like everyone says, or a savior determined to give her a life she could never imagine. Will she become his captive, or his queen? Ms. Sloane is a talented writer who brings a flawed man into the light and challenges her readers to see beyond appearances. Sometimes it is those perceived to be the worst who protect those who need it the most. The world of Knox and Leah is easy to fall into and the reader is compelled to hang on until the last word. Ms. Sloane tells a darker story where there are monsters, but some are easier to identify than others and it is up to the reader to decide who is the worst of two evils.

Leah doesn&#039;t realize how much her brother helped her out of the he** she&#039;s in by what he did. As fate would have it, the man in charge of it all is the Devil aka Knox Carter. It&#039;s amazing how each push and pull brings out the good and better of each of them. Together the Queen and the King take each scene and pull you in. The se* is hot but seeing a bad man protect his family is on a whole other level. I received an ARC for an honest and voluntarily review.

Taken by the Kingpin by Winter Sloane