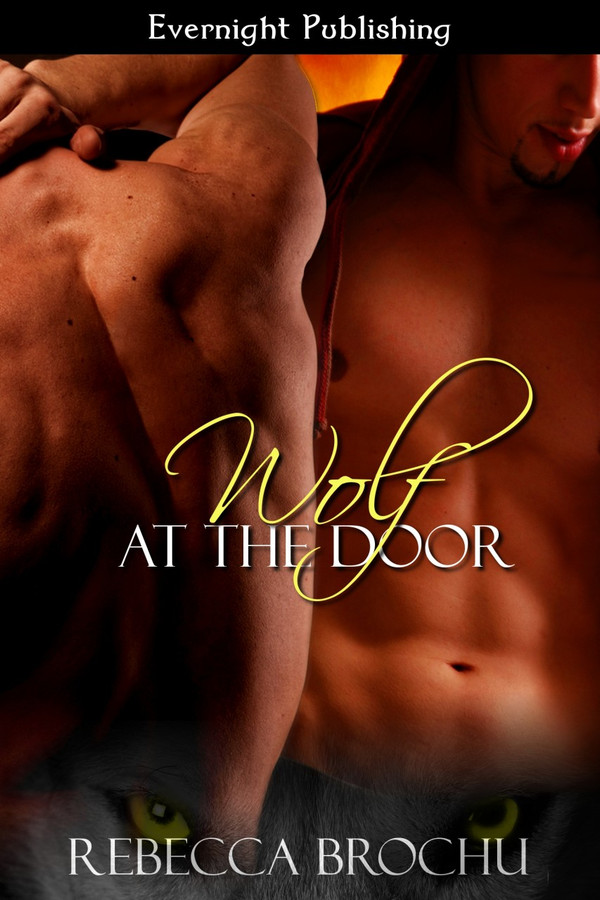 Darin Brightmore is a nurse who runs to escape the stress of his job.  He’s unprepared when a routine trip down a local hiking trail lands him in the arms of a sexy stranger.  Darin is instantly drawn to the charming Raylan and is disappointed when their encounter is cut short.  Shortly after the encounter his life takes a turn for the strange.

Raylan Loup is a werewolf who is beyond pleasantly surprised when he stumbles across the enticing Darin one late afternoon.  Determined to claim the quirky nurse as his own, Raylan sets out to win Darin over.  Unfortunately, the appearance of a Huntsman dead set on putting Raylan down turns what should have been a routine courtship into a battleground.

Can Darin accept all of the danger that comes with being Raylan’s mate or will he wish he never let the wolf at the door into his heart?

Raylan presses their joined hands to Darin’s stomach, and his other arm comes up to wrap around his chest so that his hand is hooked around the curve of Darin’s opposite shoulder.  They fit together like puzzle pieces, and Darin isn’t ashamed of the way his stomach clenches and his cock goes hard and long in his loose fitting pants.  Not when he can feel every inch of Raylan against him and he knows that the werewolf is just as affected.  Raylan dips his head and nudges Darin’s to the side so that he can run his nose along the length of his throat.

“You have no idea what it did to me to have you ask for something.  What it did to the wolf to have you participate, even unknowingly, in the gifting.  It took all the control I had left not to come for you then.  Not to push my way into your life and take and take until there was no part of you I hadn’t touched, no part I hadn’t tasted.  No part of you that wasn’t completely mixed with a part of me.”  Raylan’s teeth close over the tender flesh of Darin’s neck, and he whimpers, hips bucking up and fingers tightening around Raylan’s hand.

Raylan doesn’t stop. He just tightens his hold on Darin’s shoulder, squeezes his hand in return, and grinds the long arch of his cock against Darin’s ass.  When he finally pulls away, Darin is breathless and knows that he’s going to have one hell of a mark.  It makes something inside of him sit up and whine, makes him want to beg Raylan to do it over and over again, to mark him from head to toe.

“It got worse when I had to leave, when the Huntsman was so hard on my trail I had to disappear for a while to try to make it seem like I’d moved on.  I was two states away and the wolf would take over, would drag me almost halfway here before I could take control back enough to turn around.”  Raylan whispers the words into Darin’s ear.

“I-I don’t understand.  Why would the wolf drag you back here when there’s danger?”  Darin does his best to keep his voice even, but he knows he’s failing, can feel the tremors that are wracking his body and the way his heart’s beating fast enough to burst.

“Because it wants you, too, just as bad as I do, and it didn’t like being away from you, being unable to protect you.  And then last night when you helped me, when you treated the wound, put me in your bed and then slipped in beside me like a true mate would, I couldn’t help but move things forward to the next step.”

Darin remembers the hot press and glide of bodies and hands, the thick heat of Raylan pressed against him and the tight ring of his fingers as he wrung Darin’s orgasm out of him.  He has a fairly good idea of what the third step is.  He can vaguely remember Raylan rubbing his back, the warm dampness of his hand and the way his skin had been sticky and itchy this morning.  His dawning awareness must show somehow because Raylan’s laughing again, a dark husky chuckle that sends puffs of warm air across the mark on Darin’s neck.

“Hmm, I enjoyed it, too, enjoyed rubbing my scent onto you and yours onto me, enjoyed the thought of you lying there asleep, so trusting and smelling of our sex.  It’s a sign that you’re mine, that you belong to me and that I’m going to mate you.  If another wolf got anywhere near you they’d know right away that you were taken.  It’s still a struggle not to bend you over this counter and take you, to hold back and not fuck you right here in this kitchen until you can’t move, can’t think, without feeling me inside of you.  The scenting helps, even though the fact that it’s faded a bit because of your shower is slowly driving me crazy.  I want to be so deep inside your skin that you’ll never wash me off.”

Raylan untangles their fingers, and his now free hand skims its way beneath Darin’s too large shirt, and he hooks a thumb in the waistband of his pants.  His fingers caress the arch of Darin’s cock, finding the little wet spot on the fabric that’s proof of just how affected Darin is and worrying it with a nail.

“As a matter of fact, I think I’ll fix that problem right now.”

Darin is a male nurse that runs in the forest near his home to unwind after long days at work. One evening, though, an unexpected encounter with a strange man completely changes the course of his life and draws him into a world he was unaware existed. Raylan is an alpha werewolf, looking for his mate and claiming his own territory. Courting Darin throws them both into more danger and proves that more than werewolves exist outside fairy tales. This story reminds me of &quot;Little Red Riding Hood&quot;, even down to the red hoodie Darin wears when he runs. The twist, of course, is that the werewolf and his mate are the good guys, and the Huntsman is a woman out to kill them just because they exist. Although it is typical of werewolf romances, (love at first sight/smell, wolves mate for life), I still enjoyed the way the story played itself out. Darin was no namby-pamby needing to be protected from everything, but he was also smart enough to allow Raylan to lead in the areas where he was stronger. I found the story very enjoyable and would read more by this author.

Wolf at the Door is a fun remake of Little Red Riding hood. I really enjoyed this fairy tale romp. The humor in the story made for an additional enjoyable element. When the wolf reveals himself to Darin the adventure begins. I’m highly recommending Wolf at the Door. When Darin goes for his usual run in the woods he meets Ryland and the attraction is intense and hot, but Ryland disappears. The next night though Darin runs into a large wolf in the woods and he for some reason knows that the wolf would never hurt him. When presents begin showing up in his backyard he knows it’s the wolf and kind of thinks it’s funny. The towns people think it’s fun as well. When the wolf shows up injured its then that Darin finds out who and what his mysterious wolf is and what danger they both are in.

Wolf at the Door is a fun remake of Little Red Riding hood. I really enjoyed this fairy tale romp. The humor in the story made for an additional enjoyable element. When the wolf reveals himself to Darin the adventure begins. I’m highly recommending Wolf at the Door. When Darin goes for his usual run in the woods he meets Ryland and the attraction is intense and hot, but Ryland disappears. The next night though Darin runs into a large wolf in the woods and he for some reason knows that the wolf would never hurt him. When presents begin showing up in his backyard he knows it’s the wolf and kind of thinks it’s funny. The towns people think it’s fun as well. When the wolf shows up injured its then that Darin finds out who and what his mysterious wolf is and what danger they both are in.

I’ve read several stories by Ms. Brochu and I’ve enjoyed every one of them. I like her creative storytelling ability as well as her easy style of writing. In Wolf at the Door, she gives us an interesting and uniquely told tale of the usually typically told shifter story. What I liked about this book was the way the two heroes really seemed to connect with one another. Both heroes are likeable, interesting men that I enjoyed reading about. Darin is a successful nurse, but isn’t always appreciated for what he does. As a stress reliever, he enjoys going for a run. One day when he meets a sexy stranger, he’s immediately intrigued by him. Lucky for him, the man, Raylan, seems to be just as interested in him. But when they part, Darin wonders if he’ll ever see the handsome man again. To Darin’s surprise, a huge wolf seems to be hanging around him and if he didn’t know better, he’d believe that the wolf is courting him by leaving things at his doorstep and strangely the wolf reminds him of the sexy Raylan he can’t get his mind off of. I don’t want to spoil anything, so I’m going stop here. I will say I loved the way Raylan courted Darin and enjoyed watching their relationship develop between them. I also thought the whole ‘huntsmen’ angle to the storyline was well-written and interestingly told. This book is an adventurous, romantic story that I really enjoyed reading. Fun, sexy and filled with plenty of intrigue and adventure, Wolf at the Door gave me plenty of the much needed escapism I crave from my everyday life. I’m looking forward to reading more by this author and will actively be looking for more books written by her in the future.