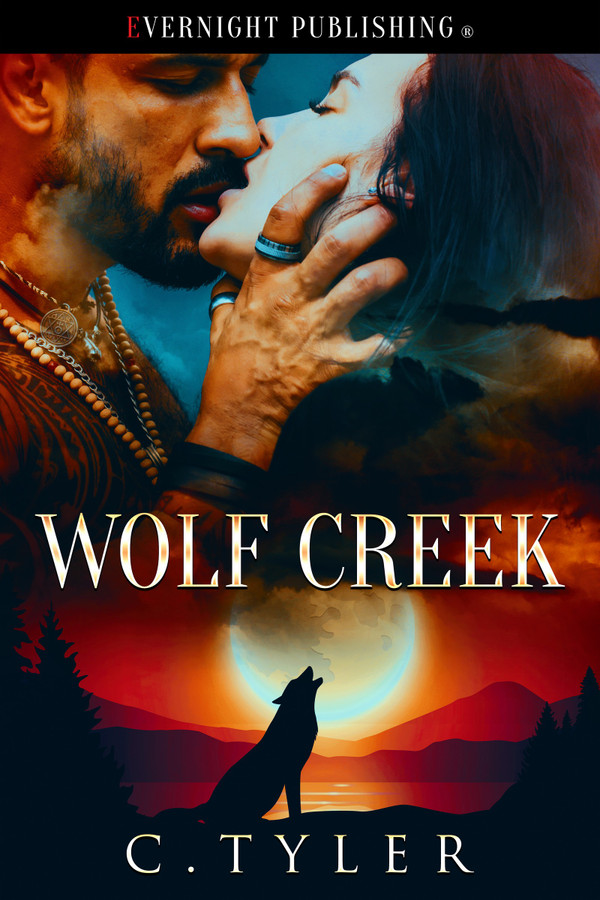 While seeking shelter during a terrible storm, monster hunter Malia Prince is instantly smitten by a local man, Adam Blackwater. He’s everything a man should be to her—tall, strong, feral—and the attraction is instant, but their meeting complicates things more than Malia is prepared for.

As the truth of things come to light, and her feelings for Adam grow, Malia is forced to wonder if the creatures she hunts are truly the real monsters in the world, and if, maybe, some people are simply meant to be together no matter what.

But by the time Malia figures out what she wants, will it be too late? After all, bullets can divide even those meant to be together…

“There any motels around here?”

“There’s one off the freeway, yeah.” Stacey nodded. “You’ll spot it easy about six or seven miles down the road.”

The drive to Nashville wasn’t for leisure. It was for work, work that would now have to wait because her ’77 Dodge decided to take a shit on her. Her night wasn’t going the way she’d planned, and when a hand landed sharply across her ass, Malia knew it would only get worse.

She shifted enough to see a tall man, lanky and greasy in appearance, grinning drunkenly at her as he awkwardly massaged her backside. He looked like he hadn’t bathed in a few days, smelled like it, too, and was missing one of his two front teeth. He was a winner, for sure.

She arched an annoyed brow.

“Hey, sexy.” His words slurred, giving her even more proof that he was shit-faced. “Been a long time since I grabbed somethin’ so sweet.”

“You don’t say,” she replied sarcastically. “Didn’t anyone ever tell you not to touch a lady unless she asks you to?”

“I couldn’t help it.” He continued to cup her ass, shifting from one cheek to the other, pawing at her like a starving man reaching for food. “Somethin’ like this just beggin’ for it.”

“Well.” Her voice was laced with a seductive coo as she met his vacant, bloodshot eyes. “If you don’t let go, I’m going to bounce your face off this bar.”

He chuckled. The action sent waves of his breath at her, the acrid stench of it curling her nose.

She shook her head in disbelief. She didn’t know if he was simply too drunk to take her warning seriously, or if he didn’t believe her in the first place, but she had warned him nonetheless.

Before the drunk could fathom the action, she grabbed his wrist, wrenched his arm behind his back, and used her leverage to slam his face into the bar. His head bounced off it with a sickening crack. An instant later, he slithered to the floor, his body limp and useless, with blood trickling down from his freshly broken nose.

As though it were nothing, she went back to her drinks, but the distinct shift in the atmosphere wasn’t lost on her. The room had gone deathly silent. The air had become oppressive, thick with the shock of what an outsider had done. Malia wasn’t stupid enough to think she’d be “unpunished” for her outburst, but she hoped the others she felt mobilizing behind her would be more cautious. She’d demonstrated her willingness to use force if needed, and with the mood she was in, she would be unpredictable at best. It was a character flaw she was well aware she possessed.

The deafening silence was finally broken minutes later. The deep, echoing thuds of heavy boots met her ears. She felt them vibrate through her feet, the determined walk of someone sober, and who had something to say about what she’d done. Her body began to vibrate with the anticipation of another possible fight.

The overbearingly male presence finally stopped only a few feet away. She could feel his eyes, his agitation, and the undeniable desire to defend the drunk she’d assaulted. It was palpable to her.

“That was uncalled for.”

His voice sent an immediate jolt racing through her body, igniting every nerve, and filling it with something that was far from fear. His voice was so deep, so guttural, and rustic that it stirred her insides, twisted them into a fluttery mess. It was instant and powerful, a reaction that she had never experienced before, and demanded her attention. Malia spun on her heel to see the person it belonged to.

The man was a giant, much taller than the first, and broad. Thick arms and a defined chest pulled at the poor tank-top he’d chosen to wear that day under a worn, brown leather vest. His skin was deliciously tanned, his jaw strong, narrow, and covered with a short beard. Long, deep chocolate-colored hair fell wildly around his handsome face, twisted and windblown like it’d never been brushed. It fell into amber-colored eyes that were fixed solely on her with uncertain intent.

Her heart raced uncontrollably within her chest, slamming against her ribs as though it were attempting to escape. Heat saturated her body, and a particular twinge of need pulsed between her thighs, but she kept her exterior calm.

“He grabbed my ass,” she said as strongly as she could manage, a task made all the more difficult as he let his gaze drift over her. When she spoke, however, she drew his eye and noticed him flinch, for some reason.

“Yeah.” A smirk tugged at his full lips, but he seemed unwilling to allow it full form. An odd desire to taste them struck her quickly and suddenly, demanding attention no matter how she beat it into submission. “I saw that.”

“Saw that, too,” he replied smoothly.

“Then what’s the problem?”

His smile broadened just a bit, revealing a pair of dimples barely hidden by facial hair. Apparently, she amused him, or at least, the situation did.

“Hm.” She nodded and feigned thought. In truth, she was using any chance she could to regain the composure the stranger had stolen from her. “Well, like I said, I warned him, and I’ll warn you, too.”

“Oh, yeah?” He cocked a thick brow, still grinning the smile that made her body flutter. Who was this guy, and why the hell did he have any power over her?