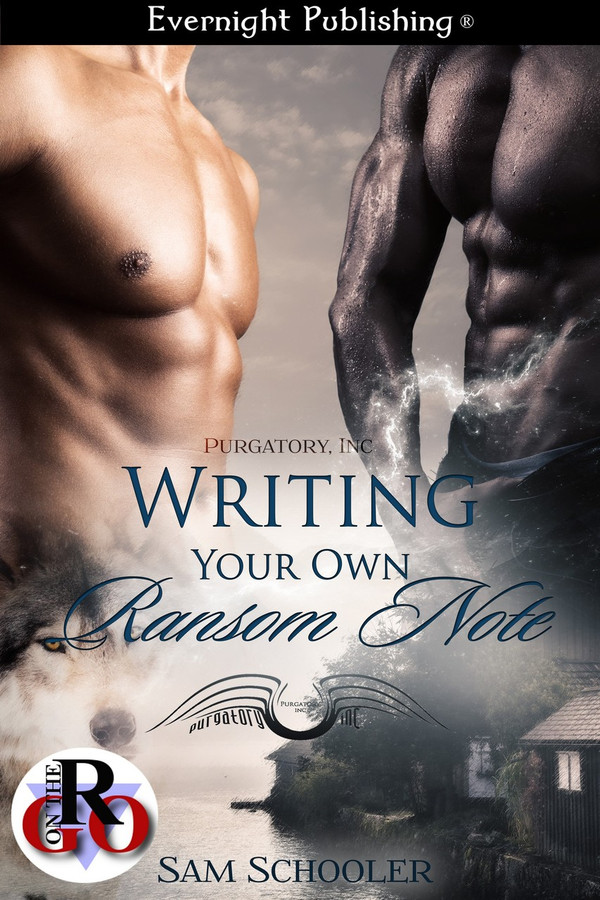 Jazz Chaillet is your average college student: caffeinating his way through his tough chemistry program, working as many hours as he can at his bakery job to offset crushing student loans...and being hunted by a hellhound.

According to the hellhound, Pyxis, tampering with dark magic has Jazz’s soul in a state of swift decay. The only problem? Jazz’s studying regimen doesn’t include witchcraft. In order to sniff out the real witch, Pyxis and Jazz will have to intimately connect to one another—in soul and body.

For a second he thought she was exaggerating, because she was prone to it—a shared quality that had made them fast best friends—but when he looked, there was actually a dog sitting on his car.

“What the fuck,” he breathed. He popped the top on the box of mixed bagels he was putting together, scrawled Nick/pickup and the date on the top, then shoved it in with the other boxes waiting for their weekly regulars. He pulled his gloves off with a sticky crackle, retied the strands of his kinky hair that were escaping from his tiny ponytail, and vaulted over the top of the counter, heading for the door.

“Wait!” Rosa hurried out from behind the espresso bar, narrowly avoiding tripping on their daily specials sign. Thank God it was the midmorning lag and there weren’t any customers to see them acting like a couple of goons. “Wait, don’t open the door! Are you nuts?” She grabbed the door handle before he could, keeping him from opening it. “He could bite your face off! Or worse, he could get in here and eat the stock.”

“I don’t think he’s interested in bagels,” Jazz said. He looked back outside.

It took a second for him to realize the dog, which had been watching the street with pricked ears like a normal animal, was staring right at him now, its eerie eyes locked on his through the glass door.

Fuck, maybe it wasn’t a dog. Jazz exhaled slowly as the… the thing blinked once, its fur ruffling in the wind. It was massive, way bigger than the K9s the local cops sometimes brought in with them, and its eyes were almost the same yellow as the bakery logo. Its coat was inky black, and its chest was wide and deep.

Or, well. Jazz distinctly remembered a few Tumblr gifs of a grizzly bear sitting on top of a car.

“Shit,” he said under his breath. “What if it’s a wolf? That looks like a wolf, right?”

“Could be.” Rosa pressed closer to the glass, her dark eyes roving over the animal. “It’s looking at us.”

Jazz has a skin condition, which causes patches of discolored flesh. He’s working hard to get his education and survive in a world that bully’s those who are different. Then a giant wolf/dog starts talking to him. The animal is actually a hellhound that’s come to eat Jazz’s rotting soul. This book was fabulous! Kudos to the author for tackling the skin disorder. Jazz was a fantastic character. He fought racism, bully’s and hater to pursue his dream. Pyxis was a badass shapeshifter/hellhound. Even though we never read his pov the author did a perfect job writing Pyxis. Both characters were fabulous! The plot was wonderful, entertaining and sexy. I can honestly say this is a must read! I was excited about this series. I read the first two books, Saving Sam and Inspiration For Hire. I did not like either one. In fact, I’m not sure how they all tie in other than having a ‘holy’ power in it. But this book is one I would recommend. Since they are all stand alone I urge you to pick up Writing Your Own Ransom Note. It’s a short read packed with fabulous characters and a great plot!

This book was fabulous! Kudos to the author for tackling the skin disorder. Jazz was a fantastic character. He fought racism, bully’s and hater to pursue his dream. Pyxis was a badass shapeshifter/hellhound. Even though we never read his pov the author did a perfect job writing Pyxis. Both characters were fabulous! The plot was wonderful, entertaining and sexy. I can honestly say this is a must read!