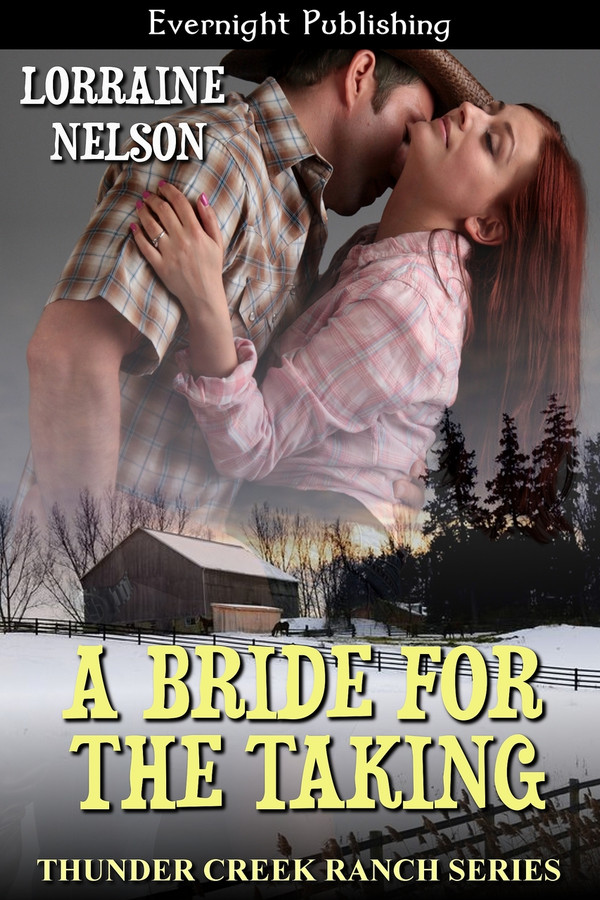 Maureen (Rena) Kerrigan is plagued with visions…nightmare visions concerning the death of a man her father, Cameron Manning, is accused of murdering. She relays her information to the police, dismayed when it all adds up to making her father appear even more guilty.

Michael Grayson, head honcho of the local RCMP detachment and Cam’s nephew by marriage, is in charge of the investigation concerning Walt Carson’s death. He believes in Rena’s visions and feels she is a target of the real killer. He vows to keep her safe while proving Cam’s innocence.

Can Michael and Rena push aside their growing attraction for each other and work together on the case? Or will desire overcome common sense and put them both in danger?

At her nod, Michael took her hand, pulling her to her feet. She removed her jacket, and they sat together on the sofa, staring into the flickering flames.

“This is nice,” she said, allowing her body to relax against the sofa.

She felt him move, felt his arm go around behind her to pull her closer.

“Very nice.” Michael planted a kiss on the top of her head.

“Simply put, they aren’t you. Yes, you three are identical to look at, but you exude a joy of life that drew me in right away.”

“Oh.” She took another sip of wine, her throat suddenly dry, and then set her glass on the coffee table. She watched as Michael leaned forward, his glass joining hers. When his hand came under her chin to gently tilt her face up toward his, she held her breath, waiting, wanting, needing his kiss.

As before, his lips brought her alive in ways she’d never felt with just a kiss. His kiss gave and it took, soothed and then plundered, putting her through a kaleidoscope of emotions she wasn’t ready to cope with. Or was she? Her hands, seemingly of their own volition, went around his neck, drawing him closer. His gentle persuasion had her lips opening, her tongue tangling with his. It was a kiss of such sensual delight, she was lost in it.

She relished the feel of his silky hair as her hands wove through it. He wore it a little on the long side for an RCMP officer, but she loved the style.

Rena felt his hands move over her back as he held her. Felt one slide around to cup her breast through her sweater. Unerringly, he found her nipple, tweaking it between his fingers. Michael was giving her a taste of heaven, and she wanted more. She’d never allowed such liberties with a beau. Personal touches always made her feel uncomfortable, and she’d backed off. Not so with Michael.

He broke the kiss and rested his forehead against hers, his breaths coming in shallow spurts as he drew in air.

“I am?” she asked, having a little trouble catching her breath as well.

“Oh, yeah. You have so much passion inside you, waiting to burst forth. I feel as if I’ve stumbled into a gold mine of mammoth proportions.”

“Thanks, I think, but I’m not sure I’m ready to take this any further, Michael.”

“No pressure. We’ll explore this attraction between us and take things one step at a time. All right?”

“All right, but can you kiss me again?”

Lost in the emotions swimming through her, she didn’t register the unbuttoning or removal of her sweater until the cool air hit her overheated skin. She was about to protest when she realized just how much she enjoyed the feel of Michael’s hands on her bare skin. She writhed in pleasure as he leaned forward to suckle a nipple. Never before had she felt such exquisite pleasure. The ring of his cell phone was a rude intrusion she could’ve done without.

In A Bride for the Taking, author Lorraine Nelson skillfully and memorably completes the arc that began in the previous book in the series, Cameron’s Quest. Whether Ms. Nelson is writing a romance that is hot or sweet, she delivers a highly enjoyable read filled with unforgettable characters, tight dialogue and page-turning plots interwoven with true romantic suspense, a loyal, loving family, and wonderful vignettes of the Canadian West and ranching life. This title is full of powerfully sweet love, as Rena Kerrigan, during her first visit to her father’s Canadian home, falls in love for the first time, with Canadian cop Michael Grayson, who has close ties with the Manning clan. Michael tries not to fight his equally growing attraction for the red-headed Rena, but he can’t help but remember what happened to the last woman he loved—and lost—in the line of duty. And duty never has been closer, as Michael races to try to solve the mystery behind who and why someone has set up his step-uncle, Cameron Manning, as a callous murderer. The assignment is all the worse, for Cameron is Rena’s newly discovered dad—and Rena herself is a target, as she uses her new-found psychic ability to try to save the two men in her life. With Lorraine Nelson, you don’t have to worry about reading a book that, once you strip away the bedroom scenes, you have no story line left. True love, a loving family, humor and suspense are the bedrocks of Ms. Nelson’s novels. And this title, as well as the prequel, go to show that this gifted author knows just how and when to turn heat into sweet, leaving you delighted with the read and looking forward to the next adventure.

Rena has developed psychic abilities. She can communicate with her father in her mind. She also has visions of what everyone thinks is a murder scene if she touches something from the scene or if she visits the scene. Her father is accused of killing someone and Rena works with Michael, the head of the local police, to try to figure out the case and to clear her father. The suspect suddenly has a psychic connection to Rena as well and starts reading her thoughts to find out where they are in the investigation. Rena and Michael make a good team uncovering clues to the case, but Michael has a secret he is keeping from Rena that is keeping them from investigating the feelings that are growing between them. Can they get past all the ugliness and solve the case? And will they ever work through Michael&#039;s issues and fall in love? When I started this book, I didn&#039;t know it was part of a series. It was a little difficult figuring out who was who and what was going on because I felt like I had come into the story in the middle. As I read, I started understanding the story and by the end, I was left with wanting to read the rest of the series. It was very well written and edited and the characters were easy to relate to. I give this book a 5 star rating!