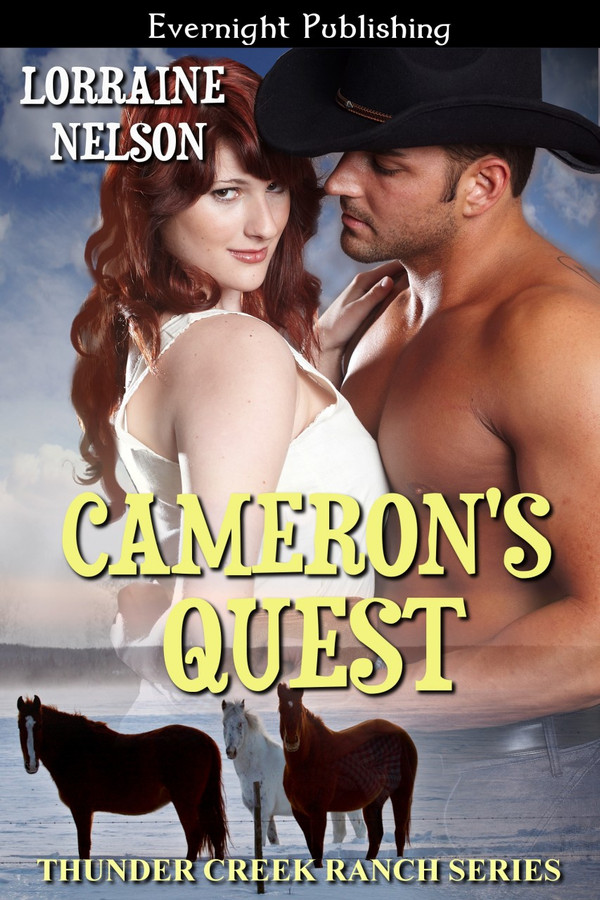 Cameron Manning has never forgotten his first love. Of Irish descent, he met red-haired, fiery tempered Lacey Kerrigan in England, but her family returns to Ireland unexpectedly and they haven’t had any means of contact. When he finds her, he receives the surprise of his life.

Lacey is thrilled to see Cameron but is afraid of being hurt again. She keeps her distance and rebuffs his advances while he’s in Ireland, certain that a long distance affair will never work. But when tickets arrive for her to visit his home in Canada, she realizes his love is true and is willing to give them a second chance.

Fate intervenes when they find a murdered man on Cameron’s back deck. All evidence points to Cameron as the killer. Can their reawakened love survive the stress of a murder investigation? Or will it be the catalyst that drives them apart forever?

Cameron’s room faced the back of the property, the only light coming from the full moon as it made its assent. Her body immersed in the silvery rays, she appeared almost incandescent, as if lit by an inner glow.

Lacey reached to pull her sweater over her head, but he stalled her with a hand on her arm. “Allow me.”

He cradled her in his arms for a moment, relishing in the delight of having her near. Then he kissed her again, reawaking the passion that was forever lurking beneath the surface. As they kissed, he worked his hands up under her sweater, locating her breasts and giving them a gentle squeeze before cupping them lightly and running his thumbs over the turgid tips. She thrust out her chest, pushing against his hands, wanting more, and he gave it to her.

He sat on the edge of the bed and pulled her into position in front of him, then pushed her sweater up and over her head. “So beautiful,” he mouthed against her skin as he lavished kisses all over. He suckled one nipple while massaging the other, squeezing and rubbing it between thumb and forefinger before switching sides. Her hands tangled in his hair as she held him tight and arched against him.

He couldn’t get enough of her. She tasted like creamed honey, so sweet that he had to taste his fill even as one hand wandered down to cup her delicate mound through her jeans. Lacey reached to undo the snap and zip, pushing the material down over her hips. He stood and laid her down on the bed to pull them off the rest of the way. Down on his knees, he kissed her belly, then parted her curls to delve into her warmth.

She was wet for him, her honey-sweet juices hot on his tongue as he laved her clit and dipped it inside, causing her back to arch off the bed. He settled her legs over his shoulders and suckled to his heart’s content as she writhed and moaned in pleasure. Only when she’d climaxed did he release his hold and rise to stand at the juncture of her thighs, her legs still over his shoulders and her bottom clear of the bed, as he plunged to the hilt.

Her insides clenched around him at the invasion, then relaxed and he began to move, in and out in an age-old rhythm to a song only they could hear. She met his moves, thrust for thrust, their bodies sweat-slicked, their breaths coming in short, hard gasps as completion neared. Her hands were soft as they traveled over his skin, played with his nipples and rested on his ass as she pulled him ever closer…deeper. When he felt her insides clench in readiness, he reached beneath her and pulled her upper body toward his, capturing her lips in a mind-blowing kiss as sensation washed over him in waves. Her scream of pleasure vibrated against his tongue, but was silenced by their kiss as he continued pumping in and out, draining them both.

Camlay down beside her, cradling her in his arms. The only sound in the room was their harsh breaths as they struggled to take in much-needed air.

Cameron&#039;s Quest ( Thunder Creek Ranch) Cameron as a young man fell in love. Lacey and Cam even though they were together for a short time, fell hard for one another. When Lacey&#039;s Uncle dies and the family has to leave there vacation spot in London, they leave without ever getting contact info to Cam. Cam is devastated and never forgets his sweet Lacey. Years, over 20, go by and he always wondered what happened to his Irish beauty. So armed with the only info he has ever had, she is Irish and her last name, Cam starts the search. Town to town, he goes. Finally he comes across a small cafe&#039;. He sees a young woman that looks like the spiting image of his Lacey. He has found his woman but also much more than he could have ever imagined. Lacey had given birth to triplet girls, about 22 years of ago. Lacey and Cam with their short time together have 3 beautiful Irish red head girls. Cam thrilled, but sad about how much he has missed, just wants to reconnect with Lacey. But not until Cam sends the 4 girls open ended tickets to come visit him on the Ranch, does Lacey&#039;s true feeling come to the light. But when a mysterious murder, happens on their doorstep, will it ruin the start of what Cam and Lacey have just start to build back? The Thunder Creek Ranch series is a series that has a great love story, danger and even some laughs. The love story is usually between 2 characters with some kind of issue, major or minor. Cam and Lacey were 2 young adults who fell in love and had found and lost one another before Lacey could find out she had been pregnant. You know Cam would have been there if he had known any of it. The Manning&#039;s (Cam&#039;s family) would be one that you would be proud to be a part of. As you read the story you not only fall in love with the people but the scenery and the potential stories you know will come. These books you should read in order due to the stories do inter weave. Adult content. Love this series and highly recommend. complimentary book given for a free review. juliesbookreview.blogspot.com

I thought the first two Thunder Creek titles were my favorites, but the fifth installment, Cameron’s Quest, is making me revise my opinion! Lorraine Nelson always excels in creating unforgettable characters, excellent dialogue and fast-paced plot lines where the love of a soul mate and the bonds of a large, loyal family are strong themes. But to this book, Ms. Nelson has added glimpses of Ireland, the world of professional cooking—and a sudden psychic ability. You’ll have four red-headed heroines to cheer for, as the other patriarch of the Manning clan, Cameron, tries to re-win the love of a woman, Lacey, who captured his heart during an unforgettable vacation from the past. And the other three heroines? Lacey’s identical triplet daughters, now out of school and helping their mother run their popular Irish bistro. Lacey and Cameron must navigate the perils of falling in love again now that both have made a life for themselves several thousand miles away from one another—and now that someone has framed Cameron for murder—someone with the Manning DNA—and someone who would kill again to stop a psychic’s visions. I agree with the reviewer from the fourth book in the series who said that Lorraine Nelson’s Thunder Creek books would make for an excellent television series. Ms. Nelson does an excellent job of building the tender warmth that exists when there is true love and there are phenomenal family ties. Another winner!

We’re back in Thunder Creek! This is the fifth book in the series by Lorraine Nelson. Cameron finds the woman he loved and lost years ago. She also has a surprise for him, triplets. Cam and Lacey’s story was very romantic. The descriptions the author paints are beautiful, of both Ireland and the Thunder Creek Ranch. The action aspect was good but that doesn’t start until three quarters of the way in. That was my only issue with this book, the pace was very slow moving. However, the characters are lovely and this is a great addition to the series!