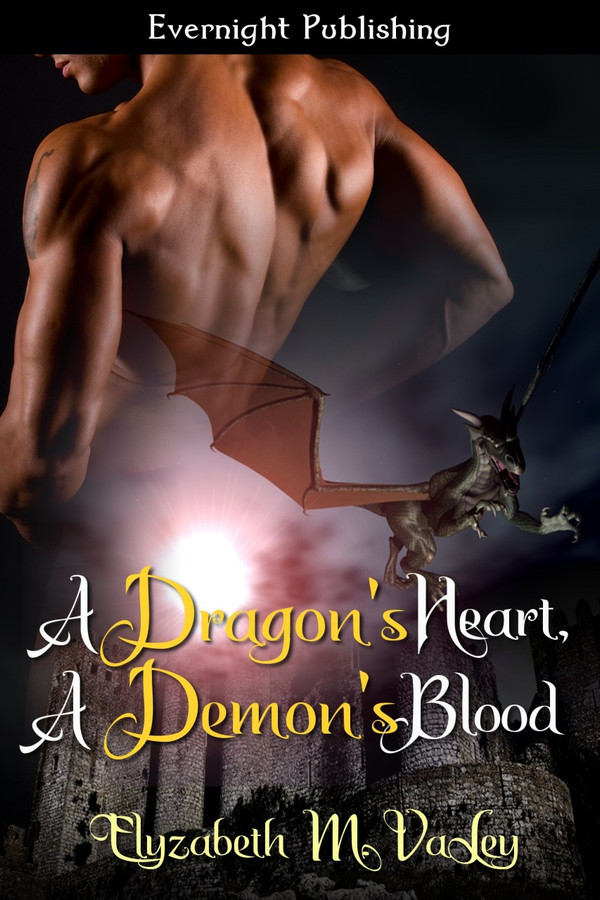 He is a shadow in the dark, smelling your scent and sensing your fear...

Legendary bounty hunter Adrian Ormonde is no ordinary man. His life is filled with secrets and questions, blood and lust. His only concern for 150 years has been survival and discovering the truth behind his demon-dragon nature.
Until he meets his new assignment: Victoria Green.

Victoria Green has felt eyes watching her every move ever since she can remember. Then, Adrian appears. The eyes vanish but new dangers arise as she falls for the mysterious hunter. Cast into an ancient conflict between dragons and demons, Victoria must trust Adrian’s skill to be enough to protect her from both the outside world and that which grows within her.

Chance brought them together but will love and passion be enough to keep them joined? Or will the other forces at play in the dragon-demon worlds destroy them forever?

Glimpsing at the tent in his jeans, she gasped.

In an instant, he was upon her, his mouth devouring hers and making her legs weak.

“You make me lose control, sweetheart, and I’ll be damned if that hasn’t happened in years.”

His hands slid down her waist over her hip and onto her thigh. Her breath hitched as she searched Adrian’s dark eyes.

“Already, you ask?” He sneered, his calloused fingers rising higher and caressing the junction between her legs. His fingertips skimmed over her labia, finding her wet entrance. His grin became smug. Adrian’s nostrils flared and his eyes flashed red as he dipped two fingers inside her, wringing out a breath she’d not been aware of holding.

“You’re already wet for me, sweetheart.”

Bringing his lips down to her, he stole another short kiss that had her whimpering against him.

She hugged him, bringing him closer and searching for his warm touch again. His eyes scanned her face, his gaze softening.

“You don’t want this, sweetheart.”

“Yes, yes I do,” she replied pushing herself against his hand. His thumb brushed over her clit. Victoria tensed. Her orgasm hung from a cliff, ready to fall.

Tangling her fingers in his hair, she pulled him to her mouth, teasing the seams with her tongue. He groaned and she tasted him with longing.  Sucking on his tongue, she made love to it as he pleasured her with his fingers. Her body became a mass of over-sensitized sparks as he coordinated his thumb with his seesawing digits. His hand on her waist, held her in place as she humped against him.

His husky baritone triggered her release. Victoria cried out, her pussy convulsing in short waves, hot liquid dripping onto Adrian’s fingers. Her towel fell to a heap on the floor as she lost control, the cool breeze doing little to soothe her heated skin. She wanted more. She wanted all of him.

Victoria moved to embrace him but he stepped away from her. Drawing his fingers into his mouth, he briefly closed his eyes emitting a barely audible sound of pleasure. When he opened them again, she gasped. Red sparks danced in his green depths.

Shaking his head, he turned around and strode out of the room. Victoria stood rooted to the spot, watching in shock as he left the apartment, the main door slamming shut. Tears dampened her vision. Picking up the t-shirt he’d given her, she put it on. More tears trailed down her cheeks as the smell of detergent mingled with his scent. Taking a deep breath, she hastily brushed them away.

Wrapping the discarded towel around her wet hair, she strode to the kitchen, her stomach growling. She didn’t think she’d find anything edible in the small kitchen, but luckily Adrian kept a box of cereal and a few cartons of unopened milk.  Digging into the meal, she shivered slightly as an unsettling feeling grew in her chest. The watchful eyes were back.

If you love paranormal romance with lots of action, adventure, erotic and sinful sex scenes then this should be on your TBR pile of books. This book was fantastic and has you turning pages to see what would happen next. It was a very entertaining read that did not disappoint at all. This book was a hot (SCORCHING HOT) read that draws the reader deep into the story. You’re there for the bad decisions that the characters make. They’re spun together with tons of action and lots of sensual, hot steamy romance. The author does all of this while managing to build a storyline that promised to be thrilling and highly emotionally charged. Adrian is a very strong Alpha male and oozes sex appeal. His character is strong and dominant and he always gets what he wants. His only goal in the beginning is to get answers, and he will do anything to get those answers, even if it means making a deal with the devil. On assignment as a hunter he meets Victoria, and even though she is his assignment there is a pull there that undeniable! He is torn between what he is meant to do and what his heart wants to do. Victoria’s character was a surprise indeed, and while I did not like her character in the beginning I loved her in the end. Adrian and Victoria had amazing chemistry and even though they had demons from their pasts to deal with, they made an amazing couple! The sex scenes between them were off the charts hot! There was a little bit of everything in this book including action, suspense and some really, really good sex all blended together. There are Demons and Dragons and an exciting plot that excites and satisfies your imagination. If this is what you love in your paranormal romance books then this is the perfect book to get your fix all in one place. You won’t regret reading this book. It was exciting and fast paced right from the start. Plus it was very intriguing and the action continued all the way to the end of the book. The writing here was flawless. The emotions were extremely intense. I definitely recommend this book.

A Dragon’s Heart, A Demon’s Blood by Elyzabeth M. VaLey is not part of a series but I can easily see a series coming out of this book. I want to know more about this world that Ms. Valey created. I am hooked! I had a hard time putting this book down I was so enthralled with it. Victoria was raised in foster care and did not know who her parents were. She has always felt eyes on her, watching her every move. She moves to Spain to escape the eyes only for them to follow her. The one person she barely knows is the one person that she trusts explicitly. Adrian has been alive for 150 years. He is a smart and ruthless man. He works as a bounty hunter and his latest target is Victoria. He is hired by the Demon Queen get Victoria to willingly enter the Demon kingdom. Adrian is looking to find out more about his demon and dragon mixed nature. The chemistry between Adrian and Victoria is blistering hot. The sex scenes were hot and spicy. These two are drawn together and care for each other in ways neither seemed to expect. I loved that as Victoria came into her powers Adrian supported her. The primary characters and secondary characters were very vivid and enthralling. There were all so interesting. I want to know more about the Demon, and Dragon Kingdoms and the Gods who rule over them. I hope there are more books coming because I am addicted to these characters and want to know more. http://romancing-the-book.com/2013/10/review-a-dragons-heart-a-demons-blood-by-elyzabeth-m-valey.html

As far back as she can remember Victoria has felt eyes watching her wherever she goes. Moving to Spain lessens the feeling for a while, but now it is back, stronger than ever. The skills honed as a hunter serve Adrian Ormonde well as he watches the girl. She may have begun as just another job. Now, however, she means so much more. The protected and safe feeling Victoria gets in Adrian’s presence is so unfamiliar she barely recognizes it on a conscious level. He embodies the very thing Victoria has feared her entire life, yet at her core she is completely drawn to him. Adrian relies on his dragon and demon senses to keep him alive, and right now both are vibrating with the need to keep Victoria safe and secure. She is being hunted, and now Adrian is as well, but he will die before he allows harm to come to this unique and beautiful creature. The dragon and demon combo rocks this story with heat and passion. I especially like Victoria’s characters as she emerges from a scared insecure young woman into a force to be reckoned with. Adrian and Victoria make their mark as they battle demons and dragons alike while fighting to stay alive long enough to get some answers. Their story will keep you energized and ready for more.