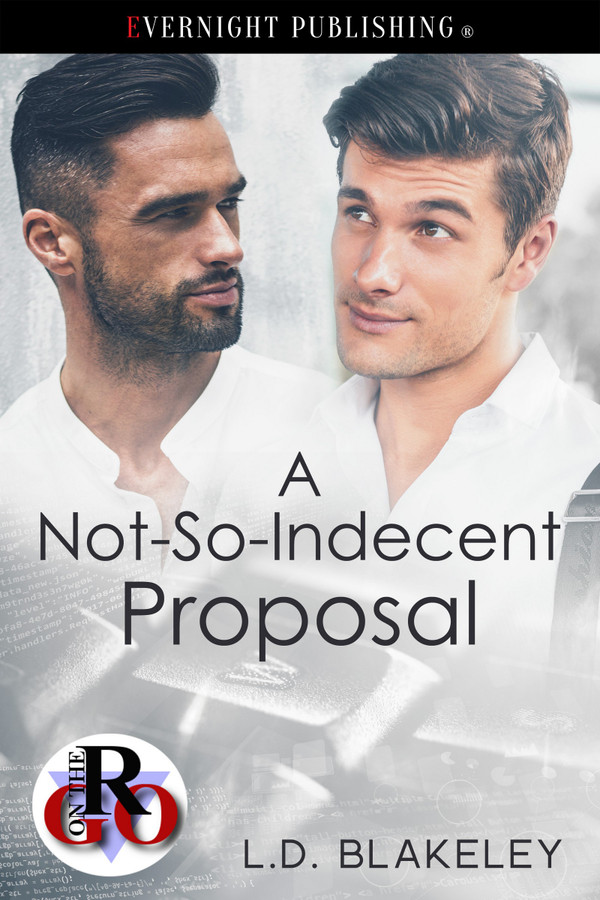 Bram Wilson has snagged his ideal internship at an exciting new app development company. The only downside? It’s unpaid. And like any recent graduate, he’s in debt up to his eyeballs.

Spencer Kemp, CEO of AppMedica, is thrilled to have just scored his first viral sensation. Not-so-thrilling is the extra cash he needs to find to keep developing his popular game while it’s hot. Of course, there’s always the money his grandmother willed him as a wedding gift. Unfortunately, he doesn’t have a boyfriend, never mind a husband.

Surely a solution can’t be that hard to find.

“Can I ask you something?” Bram asked as the waitress left to fill their order.

The question threw Spencer for a loop. “F—no. Why would you think that?”

“I kissed you.” His voice was barely above a whisper. “Remember?”

Oh, he remembered. Vividly. He couldn’t remember the last time someone had taken him so completely off guard. He’d spent more time than he cared to admit reliving the moment. But it sure as hell wasn’t a fireable offense. Okay, technically, it could have been. But in this case it had cemented his decision to go ahead with his ridiculous plan.

“No, Bram. You’re definitely not fired.”

Bram’s posture relaxed somewhat. Then he leaned forward and asked, “So what are we doing here, then?”

“Hang on a minute. You thought you were about to be fired and you came along anyway?”

“I mean, yeah. If you were going to fire me, you could have done it anywhere. At least this way, it wouldn’t have been in front of everyone at work.”

“Well, you can rest assured. Nobody is getting fired.”

As their waitress set their drinks down, they stared at each other intently. Neither man spoke until they both thanked her without breaking eye contact.

“So?” Bram prompted. “What did you want to talk about?”

After hesitating briefly, Spencer bit the bullet and dove right in. “I need to get married.”

Bram furrowed his brow and took a hearty swallow of wine. “You’ve lost me.”

“I need to get married and want to make you a proposal,” Spencer explained. “A business proposal,” he quickly added.

Spencer removed the contract from its folder, then slid it across the table toward Bram.

“My grandmother was a hateful old woman,” he began to explain. “And in order to meet the requirements put on the money she gifted me in her will, I have to show proof of marriage to her lawyers.”

“And you want me to…” Bram trailed off as he picked up the papers.

“You need help paying off a big chunk of student debt,” Spencer continued. “And I need the money to make a sizeable and timely investment in AppMedica. So what I’m proposing is we get married. In return for you agreeing to do this, I use a portion of the money to pay off your loans.”

“Get married.” Bram sounded out the phrase like it was in a foreign language. “Are you serious?”

“Quite,” Spencer answered. “Nothing as far as our respective lives go has to change. We wouldn’t have to live together or be a couple or anything like that. It would simply be a legal document we would both be signing.”

“I don’t expect you to give me an answer right away,” Spencer added.

Bram started to speak, then closed his mouth.

“Are you okay?” Spencer asked.

“I’ll be honest. I have a million things I want to say, but they all seem to want to come out as what the fuck.”

“I mean. What the fuck?” Bram finished his wine in one swallow. “This is really … what the fuck.”

pencer is having a frustrating sort of day. First, he finds out that the interns at his company aren’t getting paid, so he fixes that. Then he finds out that his app has gone viral, which is great. Or, at least, it should be. But to take advantage of this sudden popularity, Spencer’s going to need to push his people to be more on the ball, quicker with updates, quicker with replies to consumers, and to make certain he has a dedicated server to prevent lag or connection issues. Which means money. Money he has less of now that he’s paying his interns. However, every cloud has a silver lining. Spencer’s horrible, hateful, and not-so-dearly departed grandmother left him quite a tidy nest egg with one cruel caveat. He has to be married to touch it. However, since her death, laws have changed and Spencer — who is unashamedly gay — can now marry a man if he wants to. But he needs the money now (today would be nice) and he hasn’t even been on a date in a year. The answer to his problem, however, may be right in front of him. Bram Wilson is in debt. His student loans, his bills, his expenses … it’s only a matter of time before he has to start begging for help from his friends. Already he has to ask them to pay for lunch because his debit card has run dry. When Spencer offers to pay off his student loans in exchange for a signature, it’s not a hard ask, especially when Bram actually likes the man proposing to him. And if their first kiss is anything to go by, maybe this marriage won’t simply be a business arrangement. This novella is fairly straightforward in its story, which contains familiar and predictable plot lines. It’s helped with a charming couple who develop a friendly rapport and have a quick, sharp chemistry in their relationship. Really, it’s just a fun piece of fluff that I very much enjoyed reading.