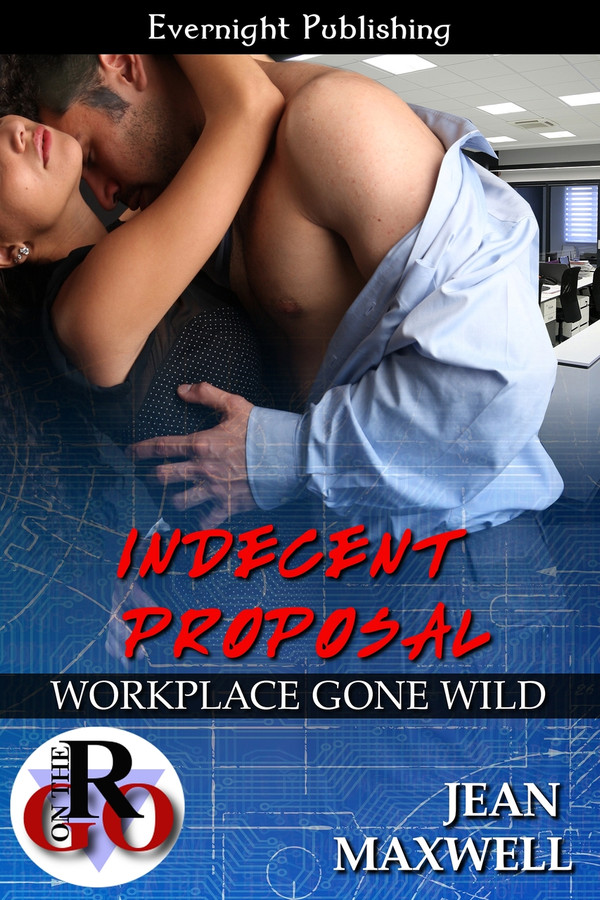 When a hard-working professional girl gets overloaded with projects she tends to go a little crazy. Add in a hot, hunky company newcomer that she must work late into the night with and the stage is set for a workplace gone wild!!

Workaholic PR Manager Carlin Cates is asked to drop everything to help out a new recruit in completing a bid proposal with tight deadlines. She’s not crazy about putting in the extra time until the newcomer, Thatcher Banks, turns out to be the hottest Project Manager in the business!

Sex on the job was only a fantasy for Carlin until Thatcher Banks came along, but just as events in the back room heat up, Banks disappears without explanation. Feeling used and manipulated, more than the proposal seems indecent as Carlin tries to heal her wounded pride and discover the truth about her mysterious co-worker.

She flipped a switch, and the overhead lamps in her office burst to life with an audible snap. Removing her coat, she glanced at her desk. Stacked in a neat arrangement were rolls of antacid tablets, a bottle of Pepto Bismol, packets of Alka Seltzer, Advil gelcaps, a collection of herbal teas, and a box of multigrain crackers. All the remedies for an upset stomach known to man in one pile! Next to these sat a potted plant with a card tied to it with a pink ribbon.

Carlin fingered the little tag, an insane hope rising at what name she might see on the signature. She’d barely read the first words, “Hoping at least one of these will cure what ails you…” when a prickling sensation began at the base of her neck. She pivoted, and there, like magic, stood Thatcher Banks.

He leaned against the doorframe with his arms folded and ankles crossed, as though he’d been there forever. An amused grin creased his handsome face.

“Good Morning, Miss Cates. You’re up and at ‘em early. You must have slept well?”

Carlin stared at the man. Her lips seemed to have stopped working. With great effort, she found her voice. “Yes. I did.” His brown eyes transfixed her, glowing like pools of sunlit honey. She could not look away.

“Well then, you won’t have need of any of my…remedies,” he said, nodding toward the desk, but his gaze never wavering from her.

Carlin reminded herself to breathe, to stay focused, even as she felt imprisoned in the warm light of his eyes.

“I…feel fine,” she heard a voice say, knowing it was her own yet hearing it as if from a distance. She forged a coy smile. “Thank you. For thinking of me.”

Thatcher cocked his head to one side. “Ah, well. Such is my luck. A fair young lady to rescue. Only I find she has rescued herself. Pity.” He unfolded his stance and stood straight, placing his hands behind his back. “Might there be some other assistance I can render?”

Carlin gave herself a mental shake. What did he mean by that? She touched her fingertips to the desktop, to stabilize the trembling in her hands. “I thought I was here to help you, not the other way around.”

Thatcher shrugged and took a measured, deliberate step into her office. “You’ve already been that,” he said. “Why not help each other?” A protracted silence followed, and though his body remained in place, Carlin felt him moving closer in a crazy, magnetic way that had no basis in reality. Her own body felt abuzz with electricity. “And it was my pleasure to be thinking of you,” he continued.

Her mouth opened in response, when the card reader at the entrance beeped. She glanced toward the sound. She could hear the swish-click of the front door opening and the familiar stomp-stomp ritual that her boss habitually performed upon entering the building, whether winter or summer. Raymond had arrived.

“But I suppose duty calls,” Thatcher said, his voice lightening. “Let’s get to it.” He smiled, a full and playful smile meant only for her, before turning away and leaving the room. “Hello, Raymond!”

Carlin blinked. His intent seemed unmistakable. Thatcher Banks was about to proposition her.

“Banks! Aren’t you the early bird,” she heard Raymond say.

Worm? She pictured herself as a bird, tugging a helpless worm from the ground with her beak. Better yet…she pictured wrapping her lips around Thatcher’s cock and giving it a tug, right here in the office. She felt certain he would have a magnificent one. Would he let her do it? Would she actually do it if he let her?

Hiding a naughty grin, she moved the collection of gifts aside to begin work. She liked to impress people with her speed and effectiveness on the job. Yet the longer she took, the longer she could keep Thatcher Banks on hand. Did that constitute a conflict? Didn’t matter. The proposal had to be filed by four o’clock. Carlin fired up her laptop and launched her mail program. A long parade of messages loaded, bearing attachments and comments.

Carlin filtered through each and saved the pertinent files. The blanks in the RFP filled rapidly with each new piece of information. Completion wasn’t far off, she realized. She may not have Mr. Banks around much longer. She sighed while sending documents to print, and as she stood to retrieve them from the printer tray, an email notification flashed.

Miss Cates, you’ve been working very hard. Would you care to join me in the coffee room for a short break? Thatcher.

She sat down and considered the words on her screen for a moment. Her hands seemed to have a mind of their own as they flew to the keyboard.

Yes I would. Be right there. Send.

Rational thought evaporated, and though Carlin knew she might be stepping into a giant cow pie of inappropriateness, she couldn’t care less. Printouts forgotten, she made a beeline for the coffee room.

Although public, the coffee room’s small size didn’t lend itself as a gathering place for employees, so the chances of it being occupied were slim. As predicted, the space appeared empty as she stepped inside. The door eased shut behind her.

“Do you take yours with cream?”

Carlin closed her eyes and smiled in both relief and wonderment at the familiar and sexy voice that spoke the question. Would something crazy happen here?

Thatcher’s arms slipped around her waist, and his body drew close to hers from behind. “I hope I’m not being too forward,” he whispered in her ear. “But I sense we have some strong feelings toward each other, no?”

“Yes what?” His hands began to glide upward.

“Yes, I have strong feelings.” She drew in a ragged breath as his palms reached the underside of her breasts and squeezed them.

“I do like this shirt you have on. Very sexy. Did you wear it for my benefit?” He nuzzled her neck beneath one ear. The hands kept moving…cupping both breasts in earnest and squeezing harder.

“I think I wore it…for my benefit,” Carlin said, her voice a breathy whisper. Dear God, her tits hadn’t been touched in months. Her nipples budded hard beneath her bra. Could he feel them from the outside? Her body shivered.

Thatcher chuckled low in her ear. “Has it been that long, dear? We must fix that. Someone as lovely as you shouldn’t go unattended.”

With that, he dropped his hands and swatted her on the behind. “Coffee break’s over. May we continue after four? I’ll let you know where.”

Carlin whirled an about face and glared at him, incredulous. “Excuse me? What sort of game are you playing, Mr. Banks? I’ll tell you when and where I’m going to be at any given moment.”

Carlin Cates is roped into helping out a colleague work overtime to make a bid proposal. Unenthusiastic, Carlin is in a mood when she gets back from her coffee run but is determined to make the best of it and help out Thatcher Banks. A bunch of emails follow and Carlin gets a good mental image of Thatcher. Stodgy, mid-fifties and possibly English to boot. The reality is mind-blowingly different to anything she’d previously believed. This is a short and fun story based on light-hearted interactions, sexy innuendo and incorrect personal assumptions. I enjoyed the email and texts that were exchanged between Carlin and Thatcher, who both take their work very seriously. The romance quickly heats up between them and is sexy and all in good fun. The pace of this story is fast. Thatcher and Carlin were interesting characters, but the short length of the story meant I didn’t get to know them as well as I would have hoped. Also, their romance happened very quickly. While it was believable, I couldn’t help but feel it was a “happy for now” sort of situation. That said, for readers wanting a quick, smooth romance “on the go” this ticks many of my boxes. I enjoy the workplace romance style of story. Carlin and Thatcher are modern and interesting people and the sexy scene between them is smoking hot and very satisfying. As a reader I felt I could really sympathize with Carlin and loved the spot of jealousy she exhibited without going over the top. I enjoyed this story and feel many readers should too. A quick, fun, lighthearted read.

This had great characters. Carlin is a divorced woman who is overworked and on anti-depressants. She’s fighting all the stress and trying to find a balance. It’s something I think a lot of women will relate to. Thatcher is a sexy man that finds Carlin irresistable, he is a genuinely good guy.