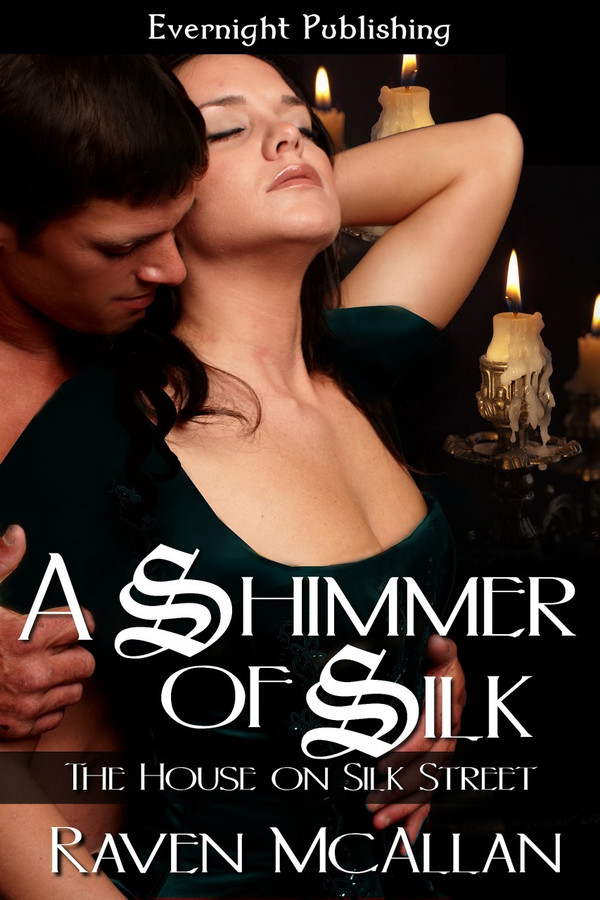 The House on Silk Street, 2

Deborah may not know the full truth about her childhood, but she knows she needs to find her soul. During one of her performances at Silk Street, she attracts the attention of Oliver, Lord Craster. Known for his extreme tastes, he sensed a kindred soul in Deborah.

Persuading her that their needs mesh proves a challenge, even to a man of his experience.  Will Oliver be the man she needs to unlock her secrets? Or will his dominance scare her too much to even try?

It was one thing to agree to accompany Oliver; it was another to do it with insouciance and style. Deborah hung onto her composure by a thread. One word out of place, one unaccustomed challenge, and she feared she would fall to pieces. But deep inside her was an excitement she had never felt before. The recognition of hope and arousal that she sensed would over come any negative feelings, or doubts, within her.

He took her hand and tucked it into his as they walked along a brightly lit, deserted corridor. There were no doors to break the flow of the walls, just lamps at regular intervals. "We will see no one unless you wish it. My apartments are mine alone. Nevertheless, Felton knows you are with me, and I have given him my word, as I did to Luc, we will do nothing without your acceptance. I promise you this also. Our life will be ours. Not for us anything others want, it will be as we desire." He stopped suddenly and pulled her into his arms.

His cock pressed against her quim, and Deborah's breath hitched. Her mouth was dry, as she felt her juices run. It seemed preferable not to look down, for she was sure the pantaloons she wore would show the marks of her excitement. As Oliver's lips touched hers, she opened her mouth and let his tongue in, to mimic the act she knew they would enjoy later. As he thrust, she couldn't help but grind her cunt against his prick.

Oliver lifted his head. "Soon, love. You taste of nectar."

He tastes of hope.

Within minutes she was standing in a small entrance hall. Deborah looked round her, hoping to get an idea of the preferences of the man. It was bland, almost conventional with cream walls and a pale green a chaise set next to a drum table against one wall. The only splash of color was a bright gold and red cushion thrown carelessly to one end of the chaise. Oliver had evidently picked up on her puzzlement.

"This is for servants to deliver food etcetera. For visitors to wait in and for us to pass through as swift as we can. Are you ready? If not now is the time to say so. You can pull the rope and a servant will escort you to your room."

Her stomach was churning but with excitement not fear. The shivers she felt were those of anticipation, not worry.

"I thought this was now my room? To share with you? Are you reneging, my lord?" His face was a picture of astonishment. Deborah couldn’t help herself; she burst into laugher. "Oh, my lord, you should see your expression. It is a sight to behold. Truly, if I ever feel threatened, uncomfortable, or unable to sustain aught we do, I will say so. My safe word is sauf."

"Your safe word?" he said slowly. "What do you know of safe words?"

"Nothing except if we are to discover my limits, we need to decide on one. A word which if I utter, you will desist immediately in whatever activity we are partaking. That is not to say you will not return to the, er subject at a later date, once we have discussed any reluctance or questions I may have. Ah, Oliver, do you think I did not know the reasons why this house exists? Even if our, that is mine and Luc's enquiries, had not told us enough, Lord Dalrey was insistent we knew where and the likes of whom we were entertaining."

"And you are happy with this?"

She giggled. "Until I taste what you have in mind for us, how do I know?" Deborah thought it was a reasonable question in the circumstances. "In theory, I know some activities will be good, some will push me, and strain my thoughts and mind. Indeed, some things may be beyond my endurance and I cry stop. But which fits where has yet to be determined. Nevertheless, I wish to see what you deem suitable for us. I need, I must, discover myself." She dare not say more. Indeed, she would have been hard pressed to do so. Deborah had no idea how to describe the turmoil her emotions were in.

He gave her a sharp glance but didn't comment.

An imp of mischief made her curtsey and she saw the glint in his eyes.

"One day, your sauce will be your undoing, my love, I will remember."

She was sure he would. In a strange way she looked forward to it.

Deborah had a childhood that left her with personal demons, ones she doesn’t share, that she keeps hidden. Her brother is the only one who knows. To help her tame those parts of her childhood she performs with her brother using knives and fire skills. Oliver attends a show at the infamous house on Silk Street where he sees a woman he had to have. She captures his interest. He feels she is the woman he needs to complete him. When Oliver approaches Deborah at the end of her performance she chooses to go with him, to see if they are meant to be. But he has extreme desires, and she must explain to him about her past. After that will they be able to move forward and complete each other’s souls. Raven once again creates a world, or in this case a house on Silk Street, where you want to go and fulfill your own desires. I want more of this series.