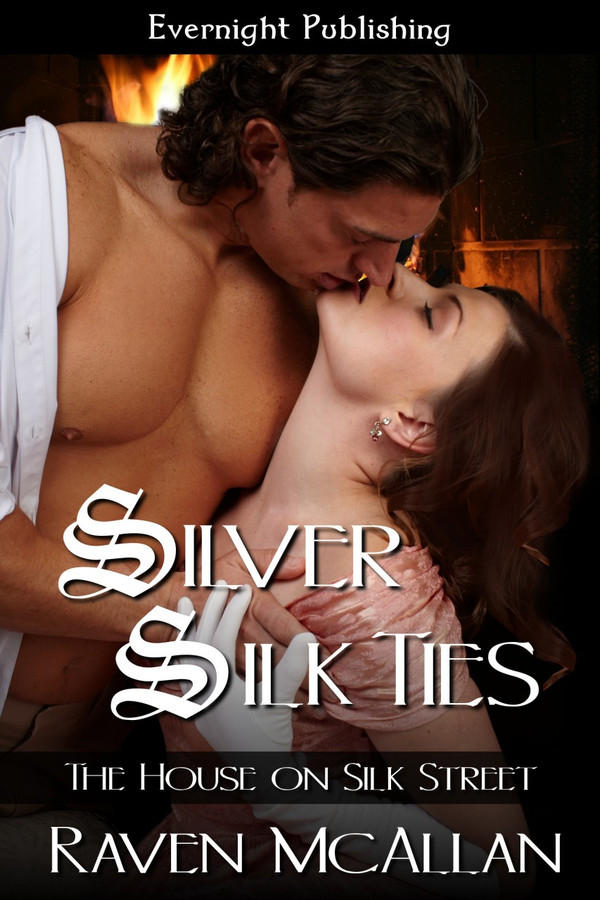 The House on Silk Street, 1

Araminta found her husband in the notorious house on Silk Street, and she hoped her luck had changed. Perhaps this would not be the marriage of convenience she feared. If only she could persuade him that she was indeed the sub he needed.

Meeting his new wife at the one place all deep dark desires could be satisfied, Felton wondered if he had been mistaken. Was this a marriage of mutual passion and ideals? Would she truly obey? There was only one way to find out—test her submission.

She tilted her head to one side, her interest evident. "And never to be assuaged?"

He shrugged. "Not where it could harm you. Oufft!"

She had clenched her fist and punched him hard in the stomach.

Only a spit-second of awareness gave him time to tighten his muscles and deflect most of the impact. Her gasp of pain smote his conscience. He hoped she had not given herself an injury.

"Not at all, unless you wish me to pursue you with a kitchen knife, my lord. I swear now, if you do anything without me, it will be only the once."

He laughed and watched, fascinated, as she ground her teeth. It was something he had never seen before, and she reminded him of a furious, spitting kitten.

"If you agree to this liaison—relationship—marriage, I will have no need to do anything without you."

To stall for time, he opened the cupboard and withdrew two silk gowns. "We decide on our parameters. As much as I wish to fuck you five ways from Friday, I have to know what your limits are. And then tell you some things that may better be unsaid. But I have decided we will have no secrets between us. Are you agreeable?"

Ara walked across to one of the screens and, with one finger, traced the outline of a dragon, spitting fire. She turned to look at him, the seriousness of her demeanor at odds with her slightly disheveled look. With a swift movement of impatience, she pulled the pins from her hair.

Felton watched, fascinated, as her dark curls tumbled over her body, teasing the top of her arse, and covering her breasts. He determined there and then to enjoy her thus, without the annoyance of clothing, but he rather thought with the long row of pearls he had earmarked as a wedding present around her waist and inside her cunt. When he had commissioned the string, he had hardly dared admit to himself what he dreamed of using them for.

Ara ran her fingers through her hair. "Ah, that is better. I detest my hair confined. It is so much more comfortable thus."

"Then shall I demand that when we are alone, you never tie it up? That only I tie anything, and it will not be your hair?"

He handed her a robe. "Will you undress and wear this then? Shall I unhook you?"

Ara shook her head. His heart sank. She was saying no?

"No, I can unhook myself, thank you. If I let you near my body, I will be a quivering mass of frustration," Ara said frankly. "But I will wear the robe. Will you?"

"But of course. It will be our ritual. Go behind the screen if you wish, and once you are ready, we will go through."

"Our room," he corrected her. "No, to a sitting room. Only once we are clear on what we expect will we go into our silk room."

Ara peered out from behind the screen where she had disappeared a few seconds earlier. "Silk room?"

"Why not? What else would you call it?"

Ara considered his question as she made short shrift of her hooks and ties. Silk seemed more than appropriate. She thought of those ropes she had seen hanging from the ceiling earlier. They had not been silk, but she could well imagine they would feel so delicate if he allowed himself to let them cross her skin. Well, it was up to her to persuade him she was ready and willing.

"Ara?" he asked, and she realized she hadn't answered him.

"Good girl." His deep voice had her juices flowing over her womanhood and down her thigh. "Come out and into the next room when you are ready. I'll wait for you there, and pour you a drink."

"Wine," she said. "No disgusting ratafia please, I beg of you."

"Oh, I like you saying that, Ara," he said and laughed. "Please beg. I am sure I will find it hard to deny you." There was the sound of a door opening and closing.

Left alone, she tried to calm her quivering body, and took several deep breaths. The gown was a soft slither of silk, deep blue, the color of the finest sapphires with a sheen of a peacock's wing. She slipped it on, savoring the way it embraced her body.

Hanging from a hook on the wall, next to a mirror unseen unless you were behind the screen, was a hairbrush. With swift, economical movements she drew it though her long tresses and winced at the pain as she untangled knots. There, she was ready. As she went to replace the brush, she saw the parchment fixed to the wall. 'Bring it with you.' Who was that meant for?, Ara decided she may as well begin to remember her chosen role. Ara slipped it into a deep pocket in the robe and began to walk to the door she had yet to access. Stopping, she turned on her heels and went back behind the screen to lift the parchment, fold it and place it next to the hairbrush in her pocket. Now she was ready.

Felton looked up as she entered the room. The fire glowed, the coals settled and not sparking.

"Join me here." He indicated the seat next to him on a long day bed. She noticed he was also wearing a robe. His was a dark maroon. It scarcely covered him as he sat sprawled in studied insolence, masculinity personified.

Obediently, she walked across the oriental-patterned carpet and sat next to him, the skirt of her robe wrapping across her knees.

Felton handed her a goblet. Its golden-pink contents bubbled and fizzed. He must have noticed her quizzical expression for he chuckled. "I have relations who survived the Corsican and prospered. This wine is the wine of the future of France. At present they are able to bottle and store very little, but as times change and methods improve, it will become the king of wines."

Ara took a sip. The bubbles teased her nose and she sneezed. "Sweetish, and I taste summer," she said. She took another cautious sip. "I like it."

"Good.” He took the glass from her hands and set it down on a table. "So now, we talk." It was not a question. "Honesty and truth now, Ara. We hold on to nothing. Between us we must be open and true. If we admit and disclose everything now, we will be free to move on together. What say you?"

"I say yes, my lord." His face relaxed, and Ara's cunt did the opposite. How could he make her want to plead for him to take her? To show her paradise once more? All with one relaxed, open look.

Araminta found her husband on Silk Street at a well-known house, where people go to have their secret desires met. She hoped that not only would she be allowed in but that she would convince her husband that she wanted more than a marriage of convenience. Felton never expected to see his new wife at the place where he could let his desires roam free. But that’s exactly what happened and he learned that not only does she know what happens behind the doors but that she wants it. Together, outside the confines of the house on Silk Street, Ara and Felton discover what they each desire, crave, and need. Will life be the same? Can she be what he wants? Will they have a marriage that isn’t just in name but one filled with passion? What a great book. Full of just enough passion, sex, and adventure. It’s a must read.

Araminta found her husband on Silk Street at a well-known house, where people go to have their secret desires met. She hoped that not only would she be allowed in but that she would convince her husband that she wanted more than a marriage of convenience. Felton never expected to see his new wife at the place where he could let his desires roam free. But that’s exactly what happened and he learned that not only does she know what happens behind the doors but that she wants it. Together, outside the confines of the house on Silk Street, Ara and Felton discover what they each desire, crave, and need. Will life be the same? Can she be what he wants? Will they have a marriage that isn’t just in name but one filled with passion? What a great book. Full of just enough passion, sex, and adventure. It’s a must read.

A Shimmer of Silk by Raven McAllan