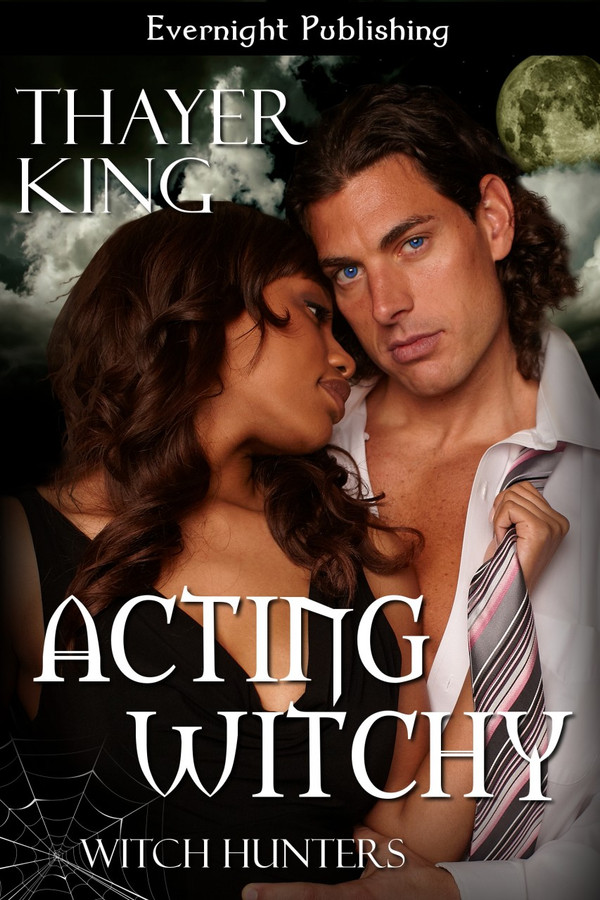 Actor Sean Savage can’t take his mind off of fellow movie star Mystique Gray. He won’t give up until she agrees to work with him.  Sean soon realizes she’s the woman for him. Unfortunately, she hates him and he can’t understand why.

Mystique Gray is an up and coming actress. She’s never met the handsome heartthrob Sean Savage, but she knows a secret about the famous actor that no one else does: Sean Savage is a witch. She gives in to his request to do his movie, but she’s determined to keep their relationship strictly professional. Letting him close could be dangerous for her heart—and his safety.

The scene called for him to back her into a wall and kiss her. Only this movie was going to be lucky to be rated R from the way he kept going at her. He kept grabbing her ass and grinding his blatant erection right into her. Steven had given up on giving him directions as to how to hold her and kiss her. They had been filming for some time to get the kiss from various angles. This wasn’t her first onscreen kiss, but it was certainly the first time it had felt so real. Even with an audience, Sean made her feel like it was only the two of them in the room.
She was going up in flames as he ate at her mouth. Her sex was molten and dripping for him. Occasionally, he would forget and penetrate her with his tongue. She barely contained her moans.
Sean undressed her several times. They took breaks to fix her hair and makeup and to follow them to the bedroom. In this scene, it was her home so the room was frilly and full of white lace. The beach house was rented. All the furnishings were props that they had brought in for filming.
She felt like a punch drunk boxer in a daze as she situated herself in bed and watched Sean strip in front of her. He had no issues with onscreen nudity. His backside was to the camera. He was covered in the front for her modesty.
In the film all the action would be continuous. In reality, she was carefully staged to look as though she were bare. Her makeup was retouched. Lighting checks were performed.
For a change, Sean wasn’t grinning as he covered her and slid between her thighs. There were fewer people onset. The sizzle between the two of them was tangible. He held himself above her until the cameras started rolling. He fitted himself to her, and as he’d warned her, he was as hard as steel. The sheets were arranged so that the sides of their hips were visible. She wore a high thong with ties on the sides. It was pulled carefully to the side so that her mound was protected as he began to move between her legs. Her fingers dug into his muscled shoulders. It was all she could do not to toss her head back and moan as he rode her. She bit her lip to control herself. Sound was not necessary for this scene as music would play over it. Moviegoers would be treated to perhaps a three to five minute clip of their actions. She felt like she’d been beneath Sean for hours.
He buried his face in her neck. “I want you so bad,” he groaned. “This is torture. I’m going to explode.” Unable to speak, she threaded her fingers through his soft black curls. “Tell me that you want me.”
“Cut!” Steven clapped his hands. “Great work, kids. I think we’ve got enough.”

I really enjoyed this book it was something different and fun at times i wanted to strangle him yet he is so damn likeable. a great read.

This is the perfect romance. We have humour, a very hot attraction, and even a paranormal aspect, the latter is a very small part of this romance. As it is one of the author&#039;s later books it is a very enjoyable read. I can also sense that there is a possible related novel in the works featuring Mystick&#039;s cousin and Sean&#039;s brother. Right, for the synopsis: Sean Savage is one of the hottest actors in hollywood and he has contacted Mystick Gray because he has seen her work and is convinced that they would have on screen magic. Mystick is an up and coming actress, successful but not in the same league. Sean has contacted Mystic&#039;s agent repeatedly to try and arrange projects that they can work on together. It isn&#039;t long before rumours start to circulate that there is a feud going on between the two actors as Mystick drops out of negotiations for projects as soon as she finds out Sean Savage is attatched to a project and turns down any opportunity to work with him. He doesn&#039;t have a clue why she won&#039;t work with him as they have never met. What he doesn&#039;t know is that Mystick knows just from seeing him on the big screen that he (Sean) is a witch. Mystick hates witches. When Sean and Mystick finally meet it is when he emerges from a stall in the ladies toilet where he has been having sex with a starlet. Despite not making the best first impression on Mystick, he starts a campaign to get his fans to pursuade Mystick to work with him. This book has a very original take on a romance set in Hollywood. If you like your romances hot, then read this one and you won&#039;t be disappointed.

Mystique is a supporting roles kind of actress and she is happy with that. When she&#039;s pushed into taking a popularized leading lady role, she is annoyed and mad. Sean Savage is making her life hell by thrusting her into the limelight with his persistence of her doing a movie with him. When the public, the media and her agent all team-up against her, she gives in. Mystique has never met Sean Savage and has secretly avoided him on purpose. With her family&#039;s business being what it is, she has no interest in meeting Mr. Sean Savage, the undercover witch. Sean is known as a playboy, not by his doing, but by the media. He is a successful actor, writer, producer and charmer of the ladies. When Mystique rejects his movie proposals numerous times, he is intrigued. Then a clever media stunt puts Mystique within his grasp, but will he get more than he bargained for? Although he knows Mystique is &quot;his one&quot;, can he convince her to once again give in to him? Their lovemaking and chemistry is more electric than either of them imagined. But, will family secrets keep the couple apart and turn more deadly than either knows? Acting Witchy is a romantic tale of love and opposites attracting. The persistence of the hero and the equally reluctance of the heroine is comical. I liked that Sean did not give up on what he wanted and was willing to go the distance to get it. Love has a way of softening even the most constricted hearts as demonstrated in this story. I liked that there was never a dull page when reading this story, the story flowed smoothly. But, who would have thought that a witch could be so pushy? LOL.

Mystique Gray is a rising movie star but her fame may just be in jeopardy if she does not soon give in and star with play boy Sean Savage in a movie. Mystique wants nothing to do with him. Not only does she not agree with his lifestyle but she knows a little secret most do not. He’s a witch. So what to do when a witch sets his sights on you? The story was fast paced and fun. I was not in tune with the characters. Sean was not as charming as he thought he was. Mystique was so easy to give in after years of running it didn’t seem real. The conflict of Mystique’s mother being the way she was for years then magically being fixed and Mystique immediately accepting it was a little strange. The writing was good. I just feel like the climax or conflict was not big enough to make a splash.