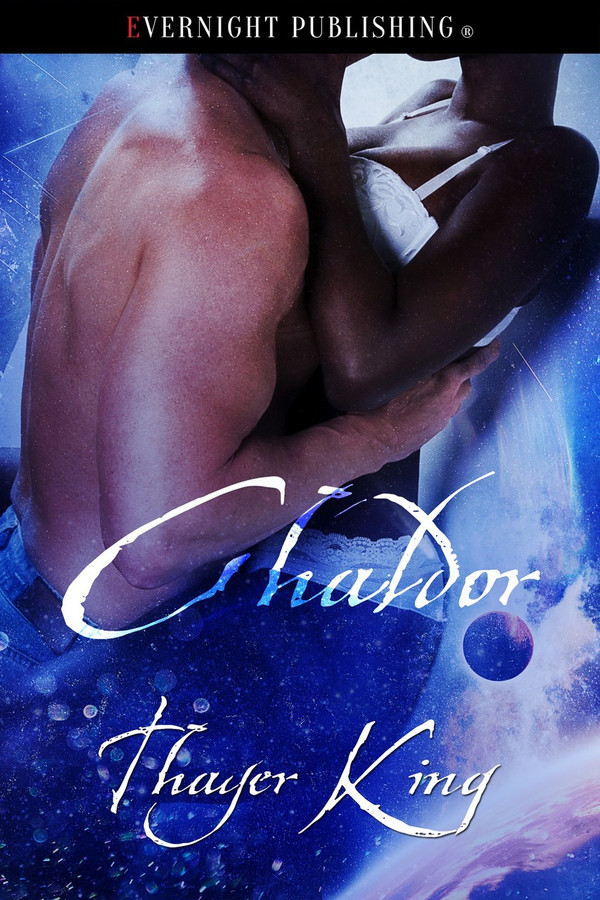 As the illegitimate daughter to the queen of Colony 15, Kiana has no interest in power or politics, yet she’s horrified by her mother’s cruelty. When her mother orders an injured warrior from another colony to be thrown out with the trash, Kiana implores her for the opportunity to heal him. Kiana does everything she can to save him—including pretending to take him as a lover.

Chaldor wakes up in the arms of a dark chocolate angel with addictive kisses. He’s willing to play the part of her pet. Kiana is the only good thing on C15 and he will take her with him when he escapes. She’ll be his forever—even if there are people dead set against them being together.

Chaldor did not know if he could trust this slip of a girl acting as his caretaker, but at the moment, he had no other choice. He was too weak from his injuries and lack of nourishment to attempt to leave this bedroom. She seemed honest, but one could never be sure.

He wished he could remember what had happened, but could recall little after arriving to visit his parents. As his parents did not live on C15, he could only surmise he’d had some mishap after leaving them. But that would mean he had lost several weeks’ worth of memories, as his visits with his parents lasted for three or more weeks at a time.

He settled in the bed, intending only to rest for a minute, and immediately fell asleep. When he woke some time later, he found her sitting at his side brushing his hair and running her fingers over his scalp while humming a song. Her voice was quite lovely. As was her face. It was slender and ended with a sweetly pointed chin. Her skin was very dark, quite possibly the darkest he had ever seen, and held a healthy sheen that almost glowed. She had inky chin-length hair braided in fat plaits that were at least two inches thick. Her eyes were her most arresting feature. They were large, charcoal gray pools and framed with lush lashes. When she caught him staring, she bit her lower full lip and her long, graceful fingers stilled as though she feared he would hurt her. She was tall, but thin, so he supposed she should fear him. He could snap her in half with little effort.

“I-I was trying to get out some of the tangles,” she said softly.

“I have been remiss. I have not thanked you for all you have done for me.”

“Oh, it’s been no trouble. I used to assist my father in healing. This is the first time I’ve done it alone, so I am relieved there was nothing seriously wrong with you.” She smiled, revealing straight white teeth.

He shifted his legs, feeling himself getting aroused. With only the sheet as cover, he was certain the sight of his erection would be indecent. He struggled to a seated position and her hands slid from his hair. He ran his fingers through the thick mane to get it out of his face and quickly discovered the bandages she had placed. “How long have I been here?”

“I have been caring for you only one night. I do not know how long you wandered.” She laid the brush in her lap and folded her hands.

Chaldor cursed under his breath. If only he could remember something. As much as he might like, he could remember nothing. Trying to force the memories only made his head ache. Rather than focus on a task he could not accomplish, he moved on to an easier one. “Do you have any clothing I could wear?”

She frowned. “I suppose you could wear some of my late father’s clothes, although…” Her eyes flashed over his shoulders and chest. “You’re quite a bit larger than he was. I do not believe I have ever seen a male as large as you.”

Every book by Thayer King is incredible!! Can’t wait for her next one to be released!!

Love it...now i need a book about Dark and whimsy sister.

As a huge fan of Whimsy, I truly enjoyed this book! It was really good to see the queen and Diamond get their come upppance. Now I just need Thayer to write a book about Dark!

I really enjoyed this syfi romance. It was just the right amount of something extra to be considered syfi without getting complicated or weird. I loved the relationship between Chaldor and Kiana. It was hot and innocent all rolled into one. There was just enough drama to make things interesting without overdoing it, and the heat factor was at the perfect setting. I loved this story and I cannot wait to see what Dark is all about.

So yeah this story pulls you in immediately I was so excited when I found out this was a sequel since I&#039;ve read almost everything by this author I didn&#039;t care what story it came from my enjoyment is always guaranteed hopefully dark gets his story next!!

Really liked this book. It was a quick read and I can’t wait to read the story about dark. Loved both H/H.

Omg!!!! This book was amazing. Mrs. King never seem to despondent. Only problem was the ending was a little rushed but not to much. This book gas me sooooo ready for darks story. Well worth the money. Read the whole thing in one sitting.