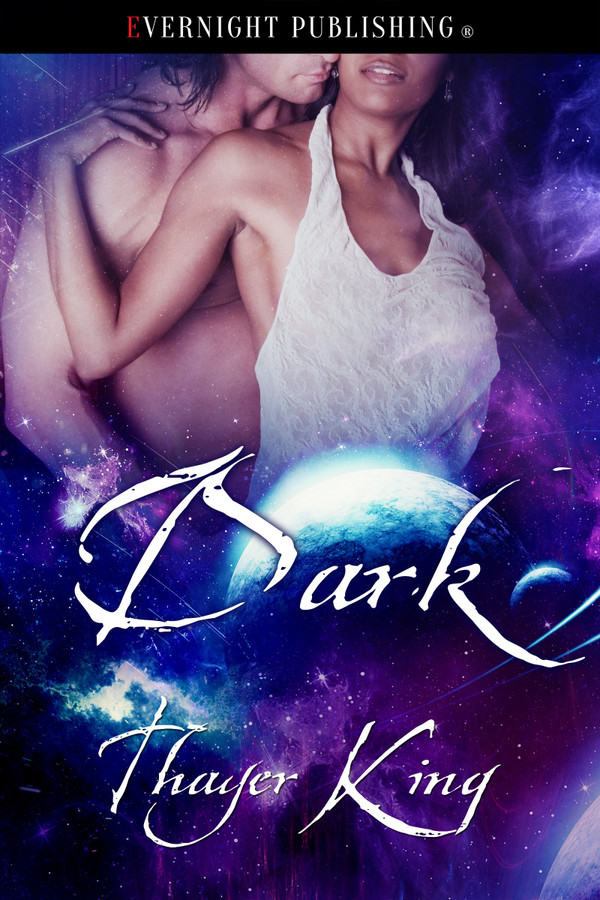 For Princess Veracity, it was love at first sight. Unfortunately, Dark has never given her any indication that he returns her affection. Even more unfortunately, she's betrothed to marry a man she's quickly growing to hate. She doesn't want to disappoint her parents, but there's a reason she's known to be the rebellious daughter. If she gets her way, her wedding day will feature an entirely different groom.

They call him a monster, an abomination. When he smiles, people run. Dark has wanted Veracity since the moment he laid eyes on her, but there are too many reasons why they can't be together. She deserves better. Because the rumors are true. He is a monster. And he's only growing stronger.

She whirled around in time to see Dark materialize from shadows in a far corner of her bedroom. She grabbed her chest. “You couldn’t appear in front of me?”

He arched one dark eyebrow. “You called me. Why are you surprised?” Her gaze flickered over him, and she bit back a lustful sigh. Dressed in all black, he was as tall as Gaedrian. He wasn’t as broad, but he’d filled out since she’d first seen him three years ago. His shoulders were wider. His arms and legs rippled with muscles as he moved closer and then leaned casually against a bedpost.

She was as mesmerized by his beauty as she was the first time they met. When his second brow rose to meet the other, she realized she was staring and she hadn’t answered his question. “I’ve never … um … summoned you. I didn’t know if you’d come.”

He always responded to Whimsy’s calls, but then, she was his queen.

“I will come when you call,” he replied simply.

She nodded. “Thank you. Um, why weren’t you there when we landed?”

His silver eyes bored into her. “People tend to be terrified of me.” He tilted his head. “But you’re not.”

“My sister isn’t afraid of you.”

He nodded. “Still, it’s not exactly wise to invite me into your bedroom. Alone.”

His gaze dropped to her chest where the bodice of her dress clung to her generous curves. She felt his gaze like a physical touch as it flowed down her waist, over her hips, and back up again. He’d never given her the impression he was interested in her in any way. His treatment of her had always been polite but distant. He probably hardly thought of her existence at all.

Her feelings for him were far more complicated. From the beginning, she’d been struck by his beauty. She admitted to having a girlish crush without knowing a single detail about him. But as the time passed and she did get to know him better, the crush didn’t fade. Instead, she feared it had bloomed into something more. She admired his kindness, his loyalty, and his strength of character.

Veracity had been careful to hide her continued feelings for Dark. She’d been silly at seventeen, mooning over him. Many boring lectures from her mother later, she’d learned never to mention his name or to show any interest in him around her parents.

“Veracity, your colony values chastity. I do not.”

She lifted her chin. She knew he wasn’t a virgin. She didn’t like it, but she had no claim to him. “Are you trying to scare me off?”

She bit her lip and took another step, this one placing her within touching distance. She would never think to approach him without some encouragement. Until a moment ago, there had been none. He’d always been friendly but … distant. “You know that I … admire you, don’t you?” He had to know. Whimsy said that he could read minds.

He nodded. He caught her hand in his when she reached out to him. His thumb caressed her palm, sending a flood of warmth to her belly and below.

REVIEW: Dark by Thayer King 9/13/2021 Picture ​Title: Dark (Princesses Book 3) Author: Thayer King Genres: Paranormal Romance, Fantasy Romance TBR Reviewer: Fiona Rating: 4 Stars - Highly Recommended Read Heat: 3 heat - Blush Worthy! ​Prince Raven of Dark Sphere has more power than anyone else around him has ever known. But when the traditional fortune-teller attended his birth, she predicted that he would lead his people to the destruction of their world. So he&#039;s been shunned his whole life. He&#039;s now in his early twenties. He&#039;s only got a very few real friends, since his tragic reaction years ago to discovering that his family had been slaughtered in an attempt to get him to return to Dark Sphere, so he could be killed. His emotions and his power combined, and he&#039;s been depressed about it ever since. He puts strong metaphysical chains around himself at least twice a day, to try to keep himself sane. Veracity is the third child of a king and queen whose other two children will not be inheriting rule over their planet, C7. Her brother, Prince True, died in a tragic accident. And her older sister, Whimsical, Whimsy for short, fell in love with Gaedrian and ran off to marry him. He&#039;s a prince also, but not the one her parents had chosen for her. So Veracity is determined to make her parents happy. Unfortunately, the man they&#039;ve chosen to unite her with is boring beyond belief. The only man her heart wants is referred to only as Dark. And he&#039;s barely acknowledged her existence. When her sister&#039;s twins turn three, there is a huge birthday celebration. Since Gaedrian is one of Dark&#039;s only friends, she knows he&#039;ll be at the party. She decides to throw herself at him, to try to get his attention. And somehow, she has to get rid of her betrothed. I was so captured by this story that I had to keep reading long after I should have gone to bed. Dark is sent on a perilous assignment, and Veracity is determined to prove her love for him, so she decides to stow-away on the ship he travels in. Dark has been keeping his strong feelings for her to himself, because of his mistaken belief that no one so pure and beautiful could love a monster like him. He suffers eloquently. But little-by-little, she wins his trust. Since she&#039;s a virgin, once again there is the required deflowering scene, where she suffers minimal discomfort after he pleasures her with his tongue. But for all of his talk of how violent his urges are, and how afraid he is that he&#039;ll hurt her, he proves to be such a considerate lover that I wanted to join her in yelling at him--&quot;I won&#039;t break!&quot; ​ They have many adventures before they realize their HEA, but when Prince Raven is finally able to undo what he had done so many years before, I was thrilled for the relief he felt. And when you care about the characters that much, you really enjoy reading the book.

Veracity has long for Dark for years to no avail. Instead of being with him, she is betrothed to someone more interested in plants than he is with her – and she’s not that bothered either. This is the third book in the Princesses series but you can read it as a standalone as I have. The couples from the first two books are mentioned but not in a way that makes you feel like you are missing out. More like you now want to read those too! Dark was a brilliant character, tortured, hard shell, the whole works. Veracity is the one to break down his walls. I was a bit confused, to begin with, because there wasn’t any mention of them knowing about the other one liking them, but then Dark is ‘summoned’ and it’s full steam ahead. Veracity is impetuous and impulsive yet tries to convince everyone she has matured. This leads to out of control situations. Dark was a great read that whisked me away to planets unknown, full of amazing characters, and plenty of steam. Thayer King is a new-to-me author but one I will be looking at more closely from now on. Absolutely recommended by me.

The firsttwo books were read years ago and I decided to re-read Whimsy and Chaldor before Dark to reacquaint myself with Gaedrian &amp; Whimsy and Chaldor &amp; Kiana as well as Dark himself. For me, it was the right decision because it enhanced my reading pleasure, also got me rooting for for Dark &amp; Veracity. From Veracity&#039;s youthful crush towards Dark in Whimsy to Veracity&#039;s maturity as twenty-one years ol young woman. Dark&#039;s fighting his attraction to Veracity because he doesn&#039;t believe he is good enough for her. Thankfully Veracity sees Raven Dark in a different light, doesn&#039;t want to see him taken advantage of because his power. The 3 epilogues are are wonderful addition giving us fans glimpses into the future of all three couples and their families.

All three books in this series are amazing to read. These stories are well written and the characters well developed.

Let me preface this by saying, Thayer King is one of my favorite authors. Her writing style has a way of capturing her reader&#039;s attention and holding it from the first word to the last word. I read this series over the weekend to familiarize myself with Dark to understand his story, to see it come full circle in a way. My excitement at the moment prevents me from saying too much without dropping spoilers but if you&#039;re new to this writer, you will NOT be disappointed. If you&#039;ve read the previous books in this series, you know that is has been a long awaited conclusion but well worth the wait.

So happy with Dark and Veracity. A few typos , but they did nit distract from the story at all.

Great book! Dark has been hotly anticipated since Whimsy was released. Sometimes authors miss the mark on their most anticipated book, but Thayer King hit the bullseye!!! I was worried because her last two book weren’t her best. This was surprising because she consistently puts out great books! King is my current favorite author and she puts out so many hits!!! I was afraid she would go the way of past favorite authors who lost their mojo (I.e., Kresley Cole, etc.). I’m happy she still got it!

I like this book. I do like the first two couples more though. I loved Dark but Veracity throwing herself at him even though he hadn&#039;t expressed interest was cringe. I am also tired of the homely black girl trope. She&#039;s always supposedly too dark, big, or tall while everyone else around her is drop dead gorgeous. The hero is beautiful, the women he&#039;s been with are beautiful &amp; the woman that rejected him is also beautiful but the heroine is the elephant man. It&#039;s a repeated theme &amp; it&#039;s tired.

I could not stop reading until I finished it. I loved “Dark” and “veracity” together. I love that she fought for him and was so protective of him. I’m glad Dark got his HEA.

I adored Whimsy and enjoyed Chaldor and eagerly anticipated this third installment. Ah, Dark. He was so mysteriously delicious in the first two novels. This one peels back the layers although a little too easily. Maybe if I reread the first two stories I would see more of the build up between he and Veracity? Nevertheless, her love conquers all determination won her man in a gutsy, satisfying way.