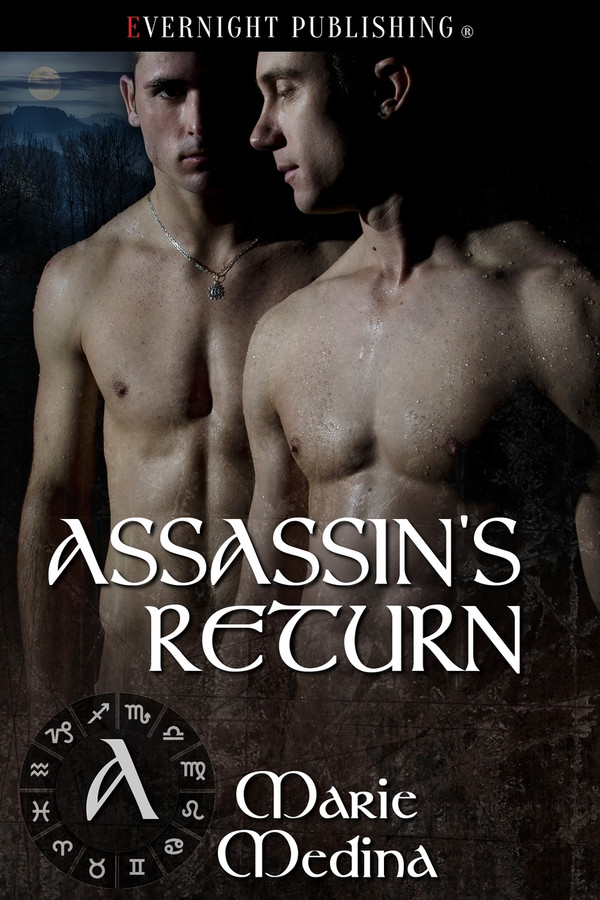 Samuel has devoted the last six years of his life to serving his king as an assassin, but the adventures he was promised are starting to lose their appeal. Two years ago, he realized what was missing in his life, but he was too afraid to act on it. When the need becomes too great, he leaves in the middle of the night to return home to his best friend … the man he fell for without even knowing it. Though he fears Quentin might not be able to accept his past, he knows he has to try to win the man’s heart.

Quentin focused on Jesse a minute, accepting a block he was handed and dutifully putting it where Jesse pointed. Soon, he said, “Dinner was wonderful. I’d never have guessed you could have a romantic meal with a two-year-old at the table.”

“I’m glad the food turned out well. And that you thought it was romantic. I worried maybe it was just me.”

“It wasn’t. No one’s cooked for me since Mom died. Lizzie and I always made dinner together. Cleaned up together. Until near the end of her pregnancy. Then I tried to make her rest.”

Samuel could hear the wistfulness in Quentin’s voice, see the sadness coming to his eyes. “You miss her, but we never talk about it.”

Quentin looked puzzled. “Does it matter? I don’t want to be maudlin.”

“I worry you don’t have anyone to talk to. To depend on.”

“I write to you. I talk to Jesse. Babies are great listeners. There’s no judgment.” He shifted on the ground, putting his weight on his left side and arm, leaning closer to Samuel. “What about you? Who do you talk to? Who helps you deal with … stuff?”

Quentin nodded. “I worry about you. Sylvana was right. You’re sweet. Sounds stupid to call a big guy like you sweet, but you are. I worry your work will change you.”

“Everything we do changes us. Can’t stop that.”

“But are you all right with it? Really? There are other ways to make money.”

“I know, but my work isn’t quite what you think. I don’t kill people because the king doesn’t like them or they pissed him off.”

“Then why do you kill them?”

“I can’t tell you. Not really. I’m forbidden from telling you names. Or times and places.” He took a deep breath. “I want to quit. You asked me that before, and I didn’t give you a clear answer. Yes, I do want to quit, and yet I don’t.”

“Can you give me a good reason you want to keep doing it?”

“How can killing people be good?”

“If someone was trying to hurt Jesse, wouldn’t you try to kill them?”

“But if you had no choice?”

Quentin sighed. “I don’t know. If someone really wished to hurt Jesse or you, then yes, I probably would. But I don’t see the point in talking about things that will probably never happen. But if we’re together, I want you with me. Here or somewhere else, I don’t care, but I’ll go crazy worrying if you continue being the king’s killer.”

Samuel flinched. “You’ve never,” he swallowed, his chest tightening, “called me a killer before.”

Quentin had shifted positions again and now hugged his knees to his chest. “But you are,” he said very softly. “I fear what it’s done to you. What it will do to you.”

Quentin pressed his lips together and turned to look at Jesse instead of answering.

“Last night, I said I wouldn’t answer your question. It’s fair enough you won’t answer mine.”

“I’m just … confused,” Quentin said, looking back at him. “I’m not saying I won’t be with you if you continue to be an assassin. But thinking of you being in danger gets me all muddled. It’s hard to know what I want.”

“Then maybe I should help you find some clarity.” Samuel moved closer, giving Quentin plenty of time to move away if he wished. When he stayed put and turned his face up, Samuel took that as encouragement. He gripped the back of Quentin’s head and kissed him. He wanted to pin Quentin to the grass and leave him panting for breath, but that didn’t seem like the right move. Instead, he kept his embrace gentle and sweet. Quentin sighed against his lips and pressed closer, and when they parted, Samuel struggled to find words as they gazed into each other’s eyes.

But then a voice broke the silence for them. “So, this is Quentin? I see you aren’t wasting time, at least.”

Samuel recognized that voice. He looked up and saw a man in very plain clothes standing at the gate. The man removed his hat, and his long red hair tumbled around his shoulders. He smiled, the expression almost a smirk, as he was probably proud of having sneaked up on them.

“Yes, Your Majesty, this is Quentin.” Samuel stood up, helping Quentin rise to his feet. “Quentin, may I introduce you to Jareth, your nosy king?”

Samuel and Quentin have been friends since they were children. Samuel has been an assassin for the King for the last six years and although the villagers believe him to be an ambassador Quentin is the only person from their village who knows his true occupation. Several years ago, Quentin’s twin sister Lizzie fell pregnant to a stranger passing through their village but she would never tell anyone who he was. Lizzie died in childbirth and to save the family the embarrassment of an unknown father Samuel declared himself to be the father when he arrived home after she passed. Quentin has been in love with Samuel for years, first as his friend but now it’s as a man even though he has no idea if Samuel feels anything other than friendship for him. He knows Samuel prefers men over women but he’s not sure if Samuel realises that he does as well! When Samuel returns from his travels this time he informs Quentin he’s staying much longer this time. Samuel seems very strange this visit and Quentin can’t put his finger on what it is. Because Samuel has made his mind up to be open with Quentin about what he wants (to be a family with Quentin and his “son” Jesse) he knows he’s going to have to be the one to make the first move because Quentin is far too timid. Samuel knows starting a relationship with Quentin is not going to be an easy thing considering he had put his hand up as the father of Quentin’s twin Lizzie’s son Jesse so that the villagers wouldn’t gossip about her and now he wants to settle down with Quentin and raise Jesse together. They both spend the next while circling each other trying to decide if a relationship will work and if the king will let Samuel out of his contract or not. Assassin’s Return isn’t a smouldering love story with lots of sex but it is a sweet tale of romance between best friends who become lovers whilst being scared that their love won’t survive the king’s wrath when he finds out his best assassin left without his permission! I urge you to get your copy to find out if Samuel and Quentin get the chance to be a family!