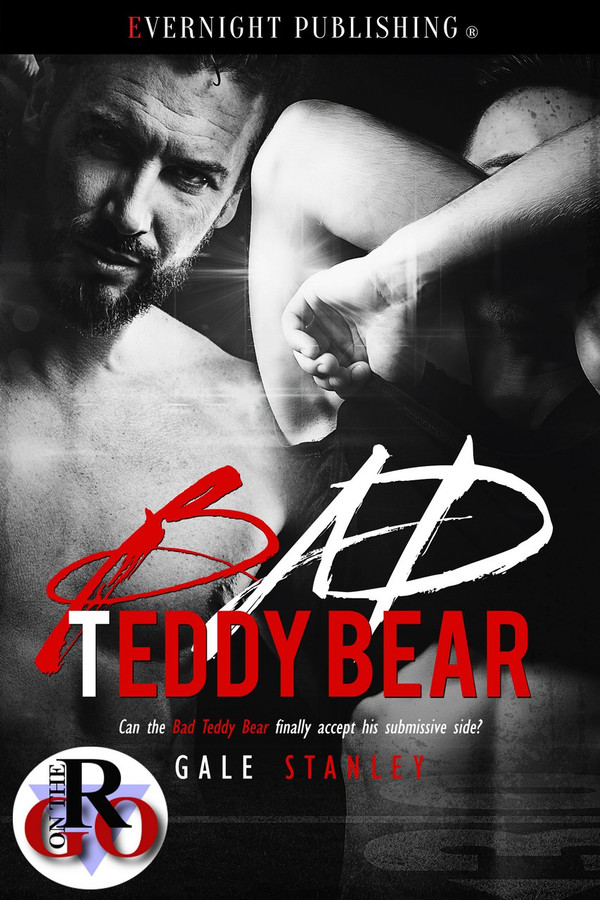 Down and dirty sex. That’s the name of the game for Theodore West.

They still call him Bear, even though his days in pro ball are over. Plenty of men are still anxious to be topped by the Bear and he’s happy to oblige as long as his partner understands the rules. No strings and no repeats.

Bear could win an academy award for his alpha-player performance, but in reality, he’d love to give up control. He’s a big man who likes the idea of being topped by a twink. In college, he found the perfect lover, but he dumped him rather than risk tarnishing his image. When Finn shows up, he turns Bear’s world upside-down. But, can the Bad Teddy Bear finally accept his submissive side?

The musky scent of sex filled Bear’s nostrils. Revved up, he pounded away at the man under him. Each forceful thrust brought a grunt from Bear and an answering groan from Jack… Whatshisname?

Bear was close too. He reached around and fisted Jack’s dick. He started pumping—

Bear followed. A few seconds later, he pulled out and rose on his knees to remove the condom. Drained, he lay on his back panting, and ran a hand through the damp matted hair on his chest. Before Bear could protest, Jack leaned over and planted a sloppy kiss on his lips.

Smooching might be fun for some guys but Bear considered it a sexual speed bump. Something to be tolerated in order to get to the good stuff. Well the good stuff was over and Bear wasn’t interested in lovey-dovey bullshit. Sure, he had feelings, but they were all below his waist. Sex was a biological urge like being thirsty or taking a piss. Once he satisfied an urge, he was done. End of story.

Jack snuggled against his body. “That was great, Bear. When I recognized you at the minimart, I never thought I’d end up getting fucked by the Big Bad Bear.”

“Guess this was your lucky day.”

“I’ll never forget that play you made right before you got injured. You could have been one of the greats.”

For crying out loud. Bear didn’t need the reminder. He could replay every second of that night in his head.

Jack’s words were a low, insistent drone in Bear’s ear, like a bunch of honeybees buzzing around his head. He tuned them out, grunted and sat up. Pillow talk bored him. Careful of his aching knees, he swung his legs over the side of the bed.

Bear stood up and finger combed his shaggy brown mane. He never spent the night. Just like he never brought a hookup back to his place. Even if he didn’t work nights, and have the old man to worry about, he wouldn’t do a sleepover. What was the point? He got what he came for. His sexual tension had been relieved and he felt good. Why spoil it with a cuddle. Cuddlers were space invaders and intimacy made a guy vulnerable.

Bear picked up his clothes. “Gotta go to work.”

Bear slammed the bedroom door behind him and struggled into his jeans. Jack didn’t follow. Guess he finally got the idea. Jack knew what he was getting. Or not getting. Bear always laid down the ground rules before hooking up. No long-term relationships. Some guys thought a good fuck would change everything. Ahh, sorry Jack. It wasn’t that good. Not for me, anyway.

Bear gripped his car keys and left Jack’s apartment. He had just enough time to stop home, shower, and put the old man to bed.

Bear considered sex to be a physical relief, nothing more nothing less. He hated cuddling, pillow talk and all the other trappings so many people seemed to think came with a good hard time in the sack. Bear works as the bouncer in a local club and was surprised to find Finn – his most memorable previous lover – is the bartender. Determined to keep his own rules about never going back for seconds, Bear is determined to forget Finn. Only it’s not that easy and soon Bear finds himself once more intimately involved with Finn. I found this to be a fun, sexy short story. I really enjoyed how Bear and Finn weren’t the stereotypical twink and alpha male, despite their physical appearances. The author did a great job to my mind of making both men interesting and strong characters, and still surprising. They felt fresh and different to me. While I admit Bear is far from a romantic character, and seemed determined to fight his attraction to Finn against all odds, the chemistry between the two men was undeniable. Readers looking for a sweeter or more emotional style of romance might be left wanting – this is a far more testosterone-fueled and edgier style of story to my mind. Personally, I enjoyed the slow build up of the story. It made me really feel and appreciate the chemistry and yearning both Bear and Finn had for each other. While I could understand if some readers find this pace a little slow – in such a short story the fact the climax really isn’t reached until the last few pages is a lot more noticeable than in a longer-length story – I didn’t mind it. I found myself far more satisfied when Bear and Finn finally came together after seeing firsthand exactly how badly they really longed for each other and after watching Bear fight his attraction to Finn so very hard. The sex is hot, very slightly kinky (handcuffs and plenty of nipple and ass play) and steamily written. I loved the happy ending and found this a deliciously spicy, short read. Readers looking for hot sex and two uncompromising, stubborn and manly men – with very little romance or softening of the story line – should find this as delicious a read as I did.

Bear is a big man with bad knees and a one-night stand kind of sex life. He breaks all his rules for Finn but Finn has an issue of his own in the form of an unwanted Prescott who will do the unthinkable to get him. I like this book even with some snags. There is a flashback without italics which drives me nuts. I didn’t know it’s a flashback and I had to read it twice to figure it out because the scenes changed all of a sudden. And the backstory is in an odd place. That threw me out of the story. However, those are minor issues and the story is good! I love how the big bad bear turns into a submissive. That really gave the story a good edge. I like Finn, and Bear is an interesting character but their romance is so quick. The story is short and there isn’t really much ‘meat’ to it. The ending is sweet and satisfying. ​ Bad Teddy Bear is a short, sexy story

Anybody who knows me will understand that I couldn&#039;t possibly skip a book with this title. Certainly not after reading the blurb and seeing that a great big bear just wanted someone to top him. Yeah, that scenario will get me every time. Hands down. No questions asked. Bear is an ex-pro football player who ruined his knees and now works as a bouncer for a club. For him sex is a bodily necessity, like eating or sleeping, and there are definitely no emotions involved. He picks up guys, let&#039;s them know the deal, screws them, and leaves. He lives with his dad who is older and needs help, and that&#039;s the extent of Bear&#039;s life. That and his constant game of &quot;what if&quot; he plays with himself in regards to his lost chance at greatness. And the loneliness he denies. Finn is the bartender at the club and he&#039;s exactly Bear&#039;s type - a red-headed twink. Too bad Finn doesn&#039;t remember the one time they had sex (back before Finn started working there), or does he? It was in college after all. Oh, Finn remembers all right and he&#039;s been hoping for a repeat but Bear keeps playing dumb so Finn is just about at the end of his patience and ready to pounce. Most of the guys look at Finn and see a bottom. Only Bear knows the truth… and vice versa. As usual I wished this was longer. I could have definitely spent more time reading about Bear and Finn. Plus their sex was steamy! A great short story that is easy, fun, sexy, with a little drama, and a nice ending.

Gutsy, great, writing from Gale Stanley in this gay romance short. Bear is a hunky stud who is determined to protect his image as a player. Then a man from his past shows up and all bets are off. The chemistry between these two is extraordinary. Great characters, engaging story, fabulous dialogue. I loved it

A terrific read from Stanley. Bad Teddy Bear taken the reader into a sordid world of sexual discovery. Certainly,one you won&#039;t want to put down. Crazy hot read.

Yep, down and dirty…couldn&#039;t put this book down. Hot, hot, hot tale of &#039;Bear&#039; looking for that perfect partner to take charge. Can you say sizzling??? No spoilers here...and I enjoyed every steamy page.

Comes out of the gate with pounding passion. Wow, still catching my breath. &quot;Bad Teddy Bear (Romance on the Go)&quot; by Gale Stanley, is a hot fast read. Can&#039;t wait to read more from this author! Recommended. Five stars.

Bear has been hiding his secret desires for years. He&#039;s only let his guard down around Finn and he was able to ask Finn for what he needed. The two had only one night two years ago, but neither one of them has forgotten the other. They are both working at the same club for a while, but they pretty much avoid each other. After an unfortunate event, Bear is asked to take Finn home and the two have a chance to talk. It was nice to see the &quot;bigger man&quot; as the bottom and sub and the &quot;smaller man&quot; as the top and dom.