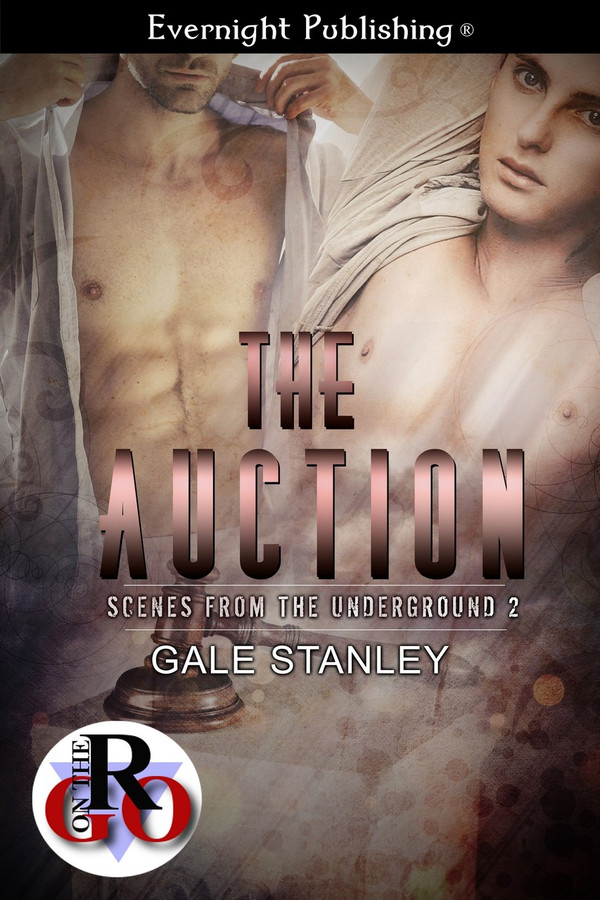 Tales from the Underground, 2

Lawrence, aka Lark, worked his way through college by dressing up like Madonna and voguing onstage. After graduation, Lawrence went looking for a real job, and met George. His new lover wanted a straight-acting partner, in business and in bed, so Lawrence gave up drag, and let George run the show.

The love relationship fizzles, but the event planning business thrives. HiJinks books a big job and both men hope it will rain referrals so they can part company. At the last minute, the entertainment bails, and Lark makes a comeback. The drag queen plays out a sexy scene on the dance floor with dinner guest, Oliver Ford. George is fuming, and willing to do anything to get rid of Lark—even if it means putting him up on the block at a slave auction.

The doctor raised his glass and touched it to Lark’s. “To you, my dear.”

Howard was a silver fox, with plenty of sex appeal. Age was only a number, after all. “Cheers.” Lark sipped slowly. The bubbles tickled her nose and made her giggle.

Howard watched her mouth and grinned. “Drink up, and I’ll refill your glass.” He lowered his hand to his lap, and squeezed his crotch.

Lark squirmed in her seat. Maybe it was the champagne, or maybe she’d just been stifled too long, but suddenly she felt very playful and free. She looked down at Howard’s lap. “I’ve heard you can go blind doing that.”

The older man chuckled. “But I won’t go blind if you do it for me.” He pulled her hand into his lap.

Lark squeezed, and Howard’s dick grew stiffer under the attention.

“Shall we skip dessert and go upstairs?” Howard said.

Lark shook her head. Wrong doctor. She wanted Oliver, not Howard. But insulting the host was a no-no, so she kept stroking. “I’ve always loved performing in public.”

Howard let out a soft groan. “Ah … you are a tasty little party favor.”

Oliver spoke to the waiter, but his eyes were on Howard and Lark. He and Bishop shared the same taste in men, and he could see Howard wanted Lark. Bishop might be in his sixties, but he had a healthy libido. When the couple got touchy-feely under the table, Oliver couldn’t sit still any longer. So you want to play games, Missy. If anyone’s going to tap your sweet hole, it’s going to be me.

Oliver pushed his chair back and stood. He walked over to the trio to request a long, slow song, and then he walked toward Howard’s table. Lark’s hands were in plain view by the time Oliver stood beside him. He smiled and addressed Howard. “That was a fabulous meal.”

“I’m glad you approve. Lark deserves the credit. She picked out the menu.”

“Yes,” Lark murmured. “You should taste the dessert.”

“I intend to.” Oliver held out his hand. “May I have this dance?”

When one partner suppresses part of the personality of the other because he doesn’t like it or because it makes him uncomfortable, it can only end in disaster. This is the situation Lawrence faces; he loves dressing in drag and becoming Lark, a persona every inch a seductive lady. But George doesn’t “approve”, and Lark gives her up for their partnership’s sake. Now that they are separated and no longer lovers, but still linked to the event planning business they started together, Lawrence thinks it is safe to let Lark come to the surface again. George, however, is too controlling to be happy and the revenge he plans is awful. In a story full of tension, emotional pain for Lawrence/Lark, and a situation that could end in total catastrophe, Lawrence has to learn to trust again, or he’ll never be happy. Lawrence is a wonderful guy, but he was too trusting when he got together with George. He also suppressed Lark, his beautiful and alluring drag persona, and that was a big mistake. When Lark comes to life again at a party George also attends, George swear revenge and tricks Lawrence into singing a contract for another big event that will net them a lot of money. But there is one problem: Lawrence will end up on the block at a slave auction. And while Lawrence is a sub, being a slave is something entirely different, even if it is only for “play”. Lawrence is scared of giving up control – and who can blame him with George having abused the privilege of being the Dom? Lawrence’s fear of what will happen was palpable, and I was glued to the pages to find out if he’d make it. Oliver is a man Lark met at the disastrous party, and he loves both Lark and Lawrence. When he gets an invite to a slave auction that he would normally ignore, he has the feeling he needs to be there. The influential (and very corrupt) police chief from book one is running the show, and Oliver wants to keep an eye on him. Oliver is shocked when he sees Lawrence on the bock, but decides to win the bid so he can punish him for being so stupid. A few machinations later Oliver has his hands much fuller than he thought, and both he and Lawrence have a few things to learn together. If you like stories that skirt the edge of cruel BDSM and are full of fear and danger, if two men who are total strangers but need to learn how to trust each other sound interesting, and if you’re looking for a read that is as suspenseful as it is surprisingly sweet and very hot, then you might enjoy this short story.

The second book in The Underground Series and definitely my favourite so far. Lark means a lot to Lawrence. His alter ego drag persona got him through college when money was tight but when he met George who would become his business partner and lover Lark was retired as George despised her. George and Lawrence are no longer lovers, they can barely stand each other but for business purposes they still share an apartment and spend quite a lot of time together. There latest contract is a big deal and Lawrence is determined Lark should be part of it. George is furious and a bit of an ass about it but the men at the party love her and can’t keep their hands off her. Oliver is one of the men attending the party and he is more than enamoured with Lark and is determined to see the woman and the man underneath become his. The sex scene is still underground with the corrupt Police force controlling things. George is mad after Lawrence’s behaviour at the party and sets out to teach him a lesson. When he signs the next business deal Lawrence is part of the contract which will see him been auctioned as a slave

The Rules is the first book in the Scenes from the Underground by Gale Stanley. Wil Rice has been a Dom for years but has not found the perfect sub that meet and share his desires. He wants a total package. Wil find a sub who appears to be in trouble but meets what he is looking for in a submissive. Aiden is in trouble with the local police chief who is determined to run the area kink clubs or shut them down. Now Wil has to get Aiden out of the police clutches. The beginning of the story leaves you wanting to know more. At the end of the first chapter, I could not wait to finish the story. The author did a good job of creating a realistic world and drawing the reader into the world she created. The pace of the story was fast paced but it was not unexpected considering the length of the story, at 40 pages. The main characters and the secondary characters were interesting and true to life. Both Aiden and Wil have their issues that make them realistic. I loved that neither was perfect. The point of view alternated between Wil and Aiden, giving the reader a glimpse inside both characters. The changing point of view was done with care so the reader did not get lost or repeat story lines. The main conflict of the story not only keeps the story moving but also gives you an idea of what the main theme of the series might be about. The characters fit the role that they had in the story very well. The level of conflict was perfect, any more and it would have over powered the story. The dialogue between the characters was honest and unique. The characters voice matched not only the setting but fit their overall personality. The ending was a bit predictable but the author takes the reader on a wonderful journey. I hope we get to see these characters again in the future.

I’m really loving this series. The corruption and rotten politics make a great background for the love story. Each book can be read on its own, but I’m hoping the characters come back cause I want to know what happens to them. Love Oliver and Lark! What a great couple! They really complement each other. When they get together, fireworks explode. The dance scene at the party is hot! Can’t wait for the next one.

This was a wonderful and exciting book. The author did a fantastic job. It is very well written and the characters are very believable. I enjoyed each and every page because Gale Stanley provided a very intriguing and exciting plot. I did find it difficult to put the book down and was disappointed when I got to the end. I wanted more and now I have to wait for this wonderful author&#039;s next release. I will be happy to recommend the book to anyone who would love a hot passionate book.

Hot, entertaining and emotional all rolled up into one great read! You will not be disappointed!

I really love this series! This book, the latest in Gale Stanley&#039;s Scenes from the Underground, can be read as a stand-alone. Similar to the first book in the series, we meet a Dom and the person who will become his submissive. The only connection between the first book and this next one is the sadistic cop&#039;s cameo in the second book. Lark (Lawrence) is a performer who is in business with his controlling ex George. While the relationship has ended, Lark feels trapped and wants out of the business as soon as he&#039;s out of the hole and can make it on his own. When the entertainment at an upscale event bails and Lark saves the day by stepping in again, George isn&#039;t thrilled. However, Dr. Oliver Ford is. The Auction is a quick, engaging and delightful read. I couldn&#039;t put it down. I&#039;m looking forward to finding out if the underground operation gets shut down for good and can hardly wait for Stanley to deliver the next book in the series!