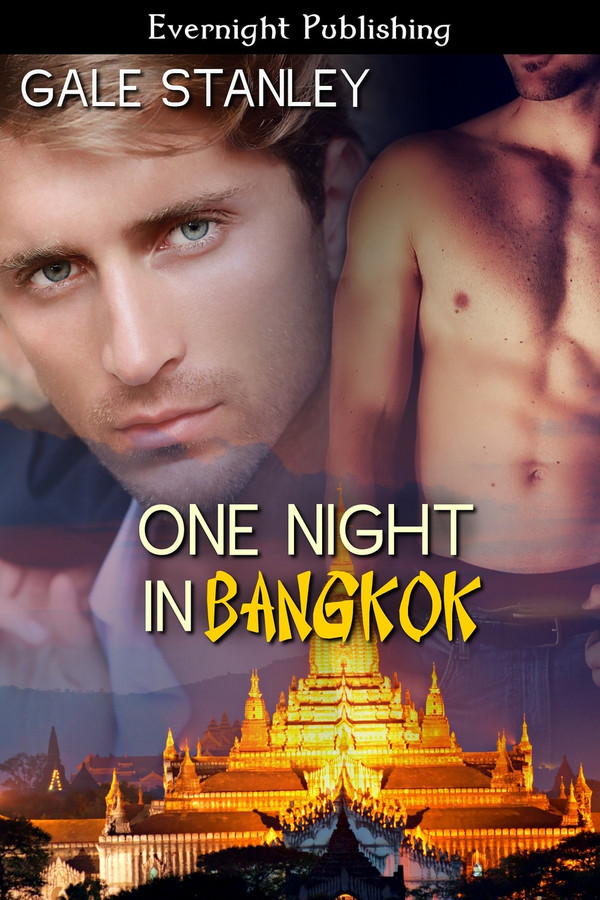 The temperature in Thailand is a humid ninety degrees but things are about to get a lot hotter for Philadelphia lawyer David Elliot.

Thailand is a hedonist’s paradise but David isn’t interested in the sinful pleasures Bangkok has to offer. His only concern is taking care of business so he can return home and patch things up with his ex. Then on his first night in town David meets Kai, and the younger man turns his world upside down. Kai is close-lipped, and David knows he's hiding something, but Kai brings a joie de vivre into David’s life that’s long been missing. Then after a few blissful weeks, Kai disappears and David is hurt. He knows this was never meant to be anything more than a pleasant diversion, but now that it's over can he walk away without looking back?

The door closed behind them, and suddenly David felt a little shy. He stared at Kai for an awkward moment, wanting to touch and be touched, but not quite believing they were finally alone. Or maybe he was just used to Bernie taking the lead.

Kai waited silently. He really was hotter than any man had a right to be, with those almond-shaped eyes and pouty lips just begging to be kissed. David’s gaze slid south and settled on the full, hard cock straining against the thin material of Kai’s pants. God, he wanted to hold Kai’s prick in his hand, breathe in the scent, taste the drops of precum leaking from the tip….

When he looked up, he saw Kai still watching him. The heat in those brown eyes turned his insides to mush. Desire overcame shyness, and David edged closer. Kai met him halfway and David let out a moan as he captured Kai’s mouth, teasing him with his tongue. Two arms snaked around David’s waist, and their swollen cocks rubbed as they kissed. Hot spikes of sensation flared at David’s groin, and he pulled Kai tighter against his body.

When they broke for a breath, Kai was flushed and panting. Without a word, he slipped from David’s grasp and went to his knees. His slim fingers gripped the waistband of David’s slacks and tugged until they puddled at David’s feet. Eyes so wide and dark they appeared black looked up at him. Then Kai pressed his mouth to the silky fabric covering David’s erection.

When Kai sucked on the tip of David’s cock, David swore he could feel the wet heat through his boxers. His thoughts scattered and he swallowed hard in anticipation. “Kai, please.” He tightened his grip on Kai’s hair and pulled gently.

Kai stood, and they undressed each other like they had that day at the temple. David smoothed a palm over Kai’s chest, muscles tensed and quivered under his touch. The goal had been to get inside this man who tempted him beyond reason, but now he didn’t know if he’d last that long.

Some people are all about their careers, an organized, orderly life, and they let this attitude pervade even their personal and love lives. David is just such a man. When his boss/lover dumps him just before an important business trip to Thailand and tells him to relax, this is not something that comes easily to David. As fun as Bangkok could be, it is not a place David has ever explored, and “one night in Bangkok” will not fix his issues – or so David thinks. This story is about the journey he takes, and it is filled with an insta-lust surprise, the discovery of illegal practices, and the need to rethink priorities. David is a lawyer on his way to partner, has followed his current lover to their now joint employer, and he will work his a** off to make life easy for his boss. And when the unthinkable happens, and said boss dumps David – in a very crude way, I might add – David is at a loss. The brown-eyed young man he encounters on his first night in Bangkok catches his attention, and turns out to have a life-changing effect in more ways than one. But things aren’t easy, and David has to make a few tough decisions before his life is back on track – albeit a very different track from before! If you like stories set in exotic locations, if two men who fall into life-changing lust are your thing, and if you’re looking for a read that is suspenseful and hot, then you might like this short story

Okay, first off, for anyone who knows the song of the same name, let’s take a moment to get it out of our heads. For anyone who has no idea what I’m talking about, don’t give it another thought that leads you to your favourite search engine. Now we can start. If nothing else, the opening couple of pages are brilliant! We meet main character, David Elliot and immediately you are on his side. But there is a lot more and is certainly a unique book. David is sent from Philadelphia to Bangkok for work, he’s a lawyer at an international law firm and he has been sent to Bangkok numerous times for work. While he’s there to close a deal for his boss, he meets a Thai man who captivates him. After the rough ride he’s just had in his personal life in the hours before he left the US for Thailand, you can’t deny David some fun. At the same time, this is Thailand, and the country really does have a wild reputation especially when it comes to businessmen. Kai is a man of secrets, and despite past (and present) abuse, he is an incredibly beautiful soul. David isn’t an alpha male type of character, though he can hold his own, but that doesn’t really matter because David is what Kai seems to need. The plot builds to a crescendo, there is a lot of intrigue, and shady details when it comes to David’s work in the city and Kai’s personal life. I can’t say anything bad about the plot. The story was well paced and if anything, the rapid ending after the slow build up was perhaps unexpected. Writing this review, I decided that this reads a lot like a fairytale, a gay, modern fairytale. I mean that in the way, they meet and Kai takes on the role of the damsel in distress (though he isn’t exactly either) and non-alpha David is the hero. Then drama ensues before the happily ever after. Although, like a fairytale, instead of thinking, “you married a guy you just met?”, “you’re doing all this for someone you barely know?” In a place like Bangkok, many of us from the West wouldn’t think that was the wisest move, so in end doesn’t that make David the best type of hero for a book?

This revision is great. The story holds you as if you are a fly on the wall in each scene - I didn&#039;t want to read it with any other distraction - I wanted to be sure I didn&#039;t miss anything; to savor the details. The twists and turns kept me guessing, and I feel like I&#039;ve been to Bangkok!

This was a sweet, endearing story and I love both Kai and David. David the lawyer works too hard...until he meets Kai and realizes life is more than work. Loved it!! I read it just before bed for sweet dreams!

David Elliott is an uptight attorney who works for a big law firm and is involved with his boss. He’s about to leave for Bangkok on business, when his lover dumps him. David is upset, but business comes first, and off he goes. Despite having a large expense account, David is only interested in doing his job—until a chance meeting in the hotel bar changes everything. There’s instant chemistry between him and Kai, but as they get to know each other a real connection develops. Both men are better for it—but can it last? Kai has secrets and they lend a bit of mystery to the plot. The sensual scenes are well done, and the exotic background is a wonderful setting. I loved it!

One Night in Bangkok is one steamy read! The story immediately transported me to the Southeast Asian setting and has the emotion and angst that I love to see in characters. The attraction between the two men, who were complete opposites, was electric and utterly palpable. Since I&#039;m a sucker for a happy ending, I definitely enjoyed seeing their relationship grow despite all the obstacles that arose. I&#039;m definitely looking forward to more works from this author.