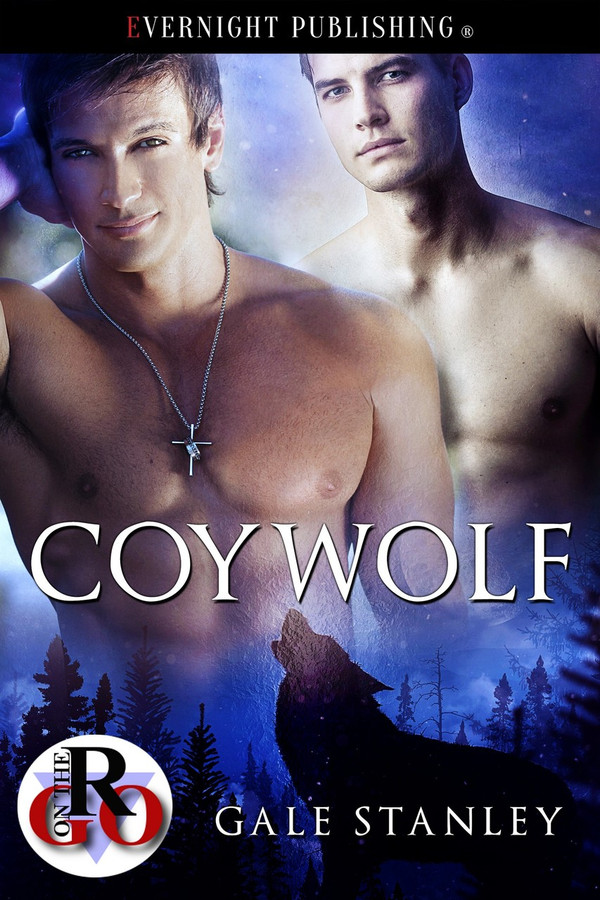 In a world where reproduction is the number one priority, a gay wolf shifter could never be an alpha. So Logan hides his secret from the pack and resigns himself to a life without love.

Then one night, he finds his true mate and he’s forced to make a choice that will change his life forever.

Logan set Rory on the wood floor. It would do, he’d slept on worse. Logan opened a cedar chest and took out a thick quilt. He laid it on the floor under a window. “It’s late. You can sleep here.” Logan pointed to the coverlet.” If you decide to shift, you can share my bed. It’s big enough for two.”

No thanks. But Rory couldn’t deny that he was tempted as he watched Logan undress. The man was sex on a stick with his strong jaw, straight nose, and dark intense eyes. Why were alphas always so damn good-looking? And straight as an arrow? Probably so they would attract the best bitches in the pack. Rory sighed. Logan looked even better with his clothes off. He had sexy chest hair and a dark curly bush that Rory wanted to bury his nose in. He imagined himself licking that half-hard dick to erectness. Down boy! He was tempted to shift, but good sense won out. If he didn’t stay in his fur, he would really be fucked.

Logan flopped onto the bed and lay flat on his back. He tugged on his cock until it stood straight up like a flagpole. Rory’s penis came out of its sheath and he whimpered. Thankfully, Logan was too busy jacking off to notice.

The Alpha bent his muscular legs and continued stroking his thick cock. The head flushed purple and pre-cum leaked from the slit. The musky scent drove Rory crazy. Slithering on his belly like a snake, Rory inched toward Logan’s dirty clothes on the floor. Rolling on them as best he could, he took comfort in Logan’s scent. But his gaze remained fixed on the man.

Logan stilled for a few minutes, and then glanced around the room. His eyes lit on Rory humping his jeans. Caught, Rory froze. A sly smile seemed to dance on Logan’s lips. His voice was low and sexy. “Pleasant dreams, boy.” Then he rolled over and promptly fell asleep.

Rory’s canine libido was in overdrive. A little more rubbing action on the denim and he shot his load. Then he settled down on the jeans, and in a few minutes his eyelids grew heavy, and he felt himself drifting off to sleep, too.

Action-packed and quick, this story satisfies. I’ve read other books by Gale Stanley and haven’t been steered wrong yet. This book was no exception. The writing flowed well and drew me in from the first page. I had to know what would happen. It’s a short story, but the characters are well-rounded. I rooted for them to get together. Rory is a coywolf – part coyote, part wolf. Interesting. I hadn’t read a coywolf story, so this was new and good for me. He’s shy, rough around the edges and a little beaten down. I liked his determination and growth through the story. Logan, the alpha, hasn’t come out. He loves being the alpha, but has reservations. I understood him. He’s been thrust into a job he’s not sure he can handle. His growth was nice, too. ort There is an instalove component to the story, but it worked. The steamy scenes are just that, steamy. The chemistry was great, too. If you’re looking for a short read that will singe the screen, then this is the story you’ve been looking for.

Before reading this story, I had no idea that coywolves are, apparently, a thing. At least for some people, who claim that the blend of coyotes and wolves (sometimes with a third component of dog genetics) are a new species beginning to populate the eastern US. Gale Stanley has taken this information and based a world on it where shifters have been hunted almost to extinction, have now been given protected areas and are trying to repopulate. Logan is an alpha, but he is also gay, and has a problem even thinking about mating with a woman. When he finds Rory, wounded by a steel trap, he decides to rescue the stranger. Logan suspects Rory may be a shifter like him, but he is clearly afraid and with the bad treatment he receives from some of Logan’s pack members, I can’t blame Rory for trying to hide. Rory is on the run. Logan’s pack isn’t the first to treat him badly, so he has decided to stay in shifted form. Life as a human is even more complicated, since half breeds like him are not accepted in either shifter or human form. He feels attracted to Logan from the start, but is determined to resist temptation since he has not got a lot of positive experiences when trusting others. If you like shifter stories that are set in a world just as homophobic as ours is in some cases, if a quick romance magically disappearing obstacles is your thing, and if you’re looking for a read with a straightforward plot, some hot man-on-man loving and a happy ending, then you might like this short story.

Steamy, suspenseful gay paranormal story written by this talented author. As entertaining as the other books she writes.

In a world where reproduction is the number one priority, a gay wolf shifter could never be an alpha. So Logan hides his secret from the pack and resigns himself to a life without love. Then one night, he finds his true mate and he’s forced to make a choice that will change his life forever. m/m sex, glbt very good story for those who like M/m and PNR- a great combination.

A shifter story that breathes some new life into the genre. Awesome! The characters are supernatural, but they have some very human flaws that make the story believable. A good escape. Well done!

Coywolf (Romance on the Go Book One) by Gale Stanley is set in a paranormal realm where sex is key. Here reproduction is most important. A gay wolf shape-shifter named Logan must hide his true nature from his pack and live a loveless life . . . until he finds his &#039;true&#039; mate on dark night, and faces a choice that must forever change his life. Warning: m/m sex, glbt, and commentary on social issues. A brave and enthralling start to a series.

great shifters, read it in one setting because I couldn&#039;t put it down!

I&#039;m not a person that is really into shifters, but this one came out and I figured, why not. It is definitely not your average shifter book. There is more compassion, devotion, and protecting than anything else. There was one major sex scene and it added to the story. It wasn&#039;t sex, sex everywhere which you typically see in shifter books. The book was written well and I&#039;m going to check out what else this author has hoping for more. It was short, sweet and sexy. Worth the read. 4 stars

Loved this story so much!!!!! Logan and Rory are opposites but the chemistry between them sizzles. So many obstacles stand between them to overcome, but you&#039;ll have to read it to find out how it all plays out! I couldn&#039;t put it down until I finished it.