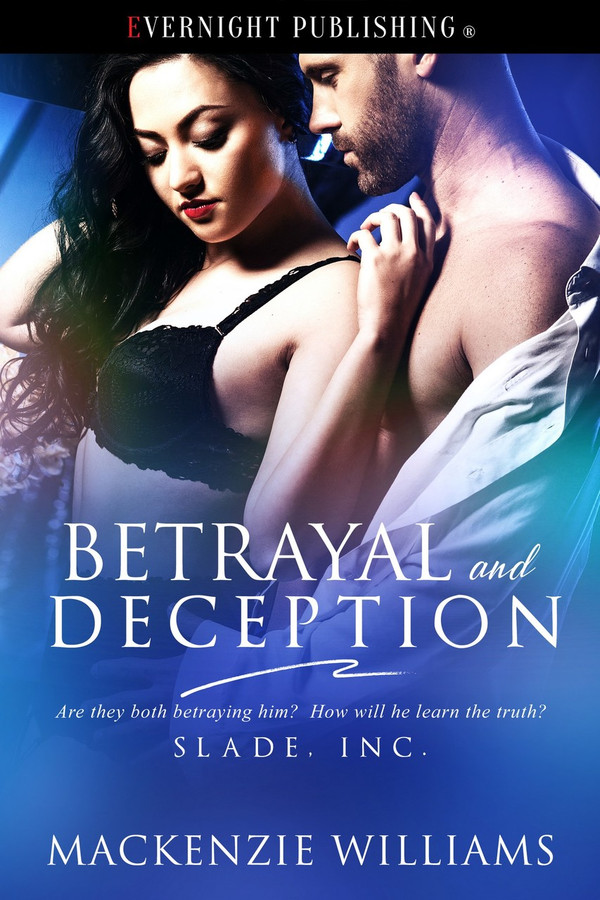 Morgan White is thrilled that her relationship with her boss, Connor Slade, is getting stronger outside of the office. However, she is still waiting to hear those three magic words: "I love you". Connor just can't bring himself to say them. At least, not yet.

Their lives get complicated when Connor is involved in an accident. While he's recovering, Morgan takes on the responsibility to entertain Connor's college buddy, Max, who is in town for a few days.

Connor soon learns that something happened between Max and Morgan. They each blame the other person, and Connor is torn between believing his old friend or his new girl. Why would either of them lie to him? Are they both betraying him? How will he learn the truth?

Connor's hand trembled against Morgan's back as he felt his climax building closer and closer.  He loved watching her head bobbing up and down in his lap.  Why was it such an attractive scene against his steering wheel?

"Morgan … Ms. White."  He liked addressing her in a proper manner.  It somehow made everything seem dirtier.  What did that say about him?  He didn't care.

She hummed beautifully around his cock in a "what?" kind of way.  Morgan didn't pull her mouth off him right away.  She licked his dick a few more times, causing him to shiver.  He gripped her shoulder a bit harsher and she finally brought her face off him.

Morgan gave him an innocent smile which had his cock twitching.  "Yes?"

Connor flexed his hands.  He was overly anxious to get inside her, but he felt as if he needed to slow down or else it would be too rough.  In this cold, sterile environment, he needed to be a bit softer.  When he took her home later, on his soft bed, he would take her as rough as he wanted to.

When he finally leaned back from her, he didn't speak.  Connor reached for his car door and opened it forcefully.  It almost got away from him as he hastily climbed out.  Morgan gasped in the car.  Didn't think I was serious, huh?

He shifted his slacks, hiding his stiff dick as he walked around the back of his Lexus.  When he reached her door, Morgan was staring up at him with her pretty mouth popped open.  A smirk lifted his lips.  Mine.  You believe that now, Morgan?

He opened her door and she didn't move.  "I wasn't kidding, Morgan."

She stuttered his name and Connor tensed his arms.  He wanted her badly.  He took a deep breath before reaching in and grabbing her hand.  She only resisted for a second before climbing out of the car.

He pulled her close to his body as he flung her car door shut.  Connor gripped her by the hips and pressed her back against the car.  He moved one hand up to hold the back of her neck as he kissed her again.  This kiss was slower but more passionate as he slipped his tongue into her warm mouth.

His thumb stroked her cheek as the kiss slowed.  That "love" word seemed closer to the surface than normal.  Connor pulled back from her and Morgan's mesmerizing brown eyes fluttered open.  She sighed and Connor felt his chest tighten.  He just didn't know if it tightened in a good or bad way.

"Come on."  He stepped back, grabbing her hand.

She stutter-stepped after him.  "Wait.  Here?"

"Yes.  I already told you that.  Stop questioning it."

She squeezed his hand harder as they rounded the front of the car.  The headlights momentarily lit up their legs.  His car door was still open and Connor came to a stop just in front of it.  He turned Morgan around to face the hood and quickly grabbed her ass.

She yelped.  "Connor!  Aren't there security cameras down here?"

He slowly lifted her skirt.  "Yes.  Why do you think we are behind this door?  I know where they can and can't see."  He raised an eyebrow playfully.

The Deception Game by Raven McAllan