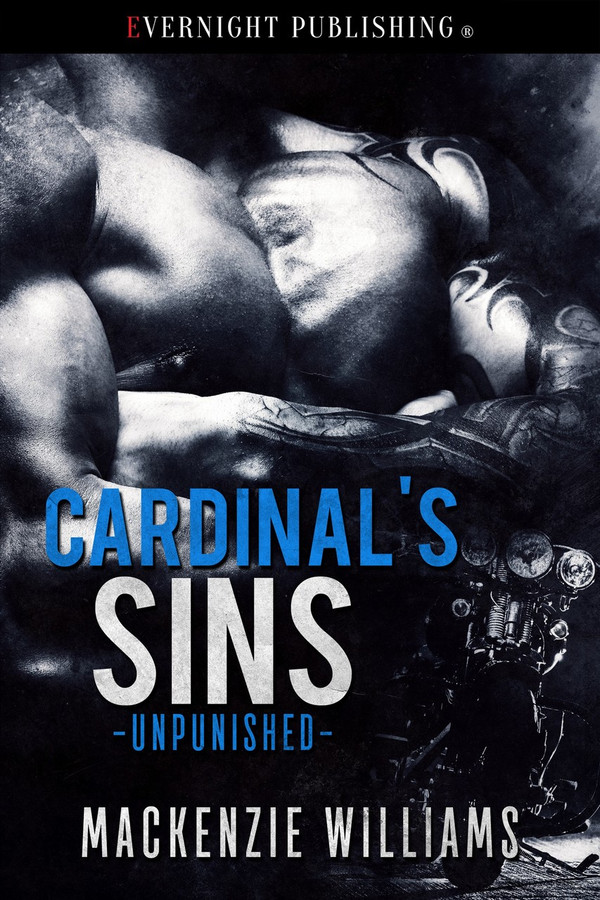 Tessa Richardson is trying to figure out if this newfound love with Levi Cardinal is real or if she's simply another job of his that turned into a passionate affair. Even if his intentions are good, will a normal life with her ever be enough for Levi?

Levi was more than happy to walk away from his criminal ways for Tessa, but it won't be that easy. His old boss needs him for one more job and when Levi refuses, he threatens to expose some of Levi's secrets. Can Levi finish this without losing Tessa in the process?

“Sit down.” Levi let go of her hand and pointed at the corner of the bed.

Tessa stood there for a moment and watched him head to his dresser. He opened the top drawer but paused before taking anything out. He turned to look at her, nodding at the bed. She exhaled and turned her back to him to sit down.

She nervously fidgeted with her fingers as she listened to Levi shut his drawer and return to her.

“Levi, I’m not sure I’ve thanked you for getting me out of that hotel.”

“Sshh, Tessa.” He stood off to her left side.

Before she could turn to look up at him, Levi lowered a black piece of cloth in front of her face. He slowly brought it to her eyes and then proceeded to tie it behind her head. She inhaled a deep breath, taking in the blackness of the blindfold.

“Love, you’re going to let go. At least for the time you’re in here with me. I’m in charge. You have no reason to think or overanalyze. You just need to feel and react.”

Tessa’s clit began to throb at his commanding but reassuring tone. Levi placed a hand on her shoulder and squeezed. This simple gesture was like him claiming her all over again. She was his, at least in this moment.

“What are you here for, Tessa?”

She took a shaky breath, not sure of what to say. Tessa played with her fingers, thinking.

Levi let go of her shoulder and seized a handful of her long hair. He slowly pulled on it, tilting her head back. Not roughly, but also unforgiving. Tessa whimpered and her nipples reacted by hardening.

“Stop thinking. What are you here for?” His tone was even and calm.

“You.” The word flew out before she could stop it.

She could practically see his grin in her mind. Levi let go of her hair and she inhaled, straightening her neck. Anxiety tightened her chest as she felt him step away from her. Was this man always so intense, and if so, could she handle him?

Tessa’s breathing became ragged as she tried to listen for him. Was he undressing? For the most part, he was quiet, but after a minute or so, she heard him return to her. Levi gripped the bottom of the t-shirt she wore. He gradually pulled it up, and she raised her arms to allow him to remove it.

The dark cloth around her head barely moved as her hair fell back down onto her shoulders. Tessa ran her hands down her thighs, waiting. She was stifling the urge to pull the blindfold up. She desperately wanted to see Levi’s handsome face and stunning body. Was that part of this game?

“Do you know how beautiful you are?” Levi’s words seemed to rain down on her.

She shivered as his warm hands touched her knees. He was leaning over her, his breath lightly blowing on her neck.

“Well, do you know how handsome you are?” She wasn’t sure why it seemed so important to tell him that, but it did.

Maybe Levi was well aware of how hot he was. Maybe he didn’t care about things like that. In time, hopefully she’d get to know him better to judge such things.

One of his hands stayed on her knee as he moved the other one. Tessa gasped as she felt his hand on her panties. Levi lightly ran his fingers over her pussy lips. Her clit tingled as her pussy wet further with his touches.

“I’ve been told that before, but I like hearing it from you.”

She couldn’t tell how much humor was in his tone. Levi’s light rubbing of her pussy through the thin fabric was making it hard to concentrate on things like humor. Tessa inhaled with a slight tremble as he pressed harder on her engorged clit. Her panties were becoming wet.

“Now, let’s use these bodies the way they’re meant to be used.” Levi leaned his face closer to hers.