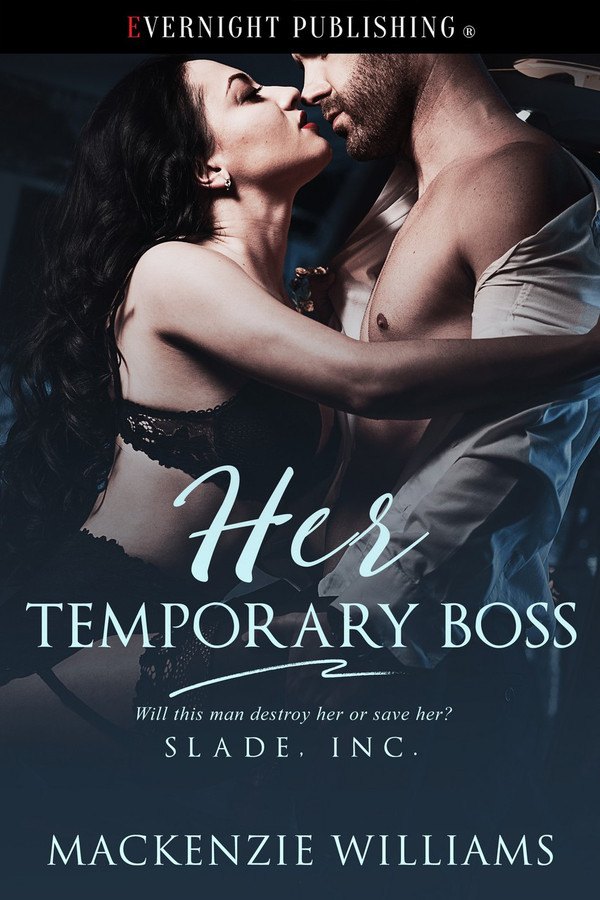 Morgan White is in the middle of a rough patch in her life as she begins her new job. She has just broken things off with her fiancé after finding out about his unfaithful ways. As she starts her temporary job at Slade Incorporated, she feels unworthy of love.

Connor Slade is not your typical boss. He isn't just looking for someone with great secretarial skills. Can Morgan be what he wants her to be? Will this man destroy her or save her?

At one-forty, she sat staring at the clock. Her smile faded as excitement and nervousness took over. She only had to wait one more minute and then she heard him.

Her smile returned as she left her office, but she did her best to hide it once she entered through his open office door. There Mr. Slade stood, with his hands on his hips, his sweaty shirt already off. His hair looked wild and damp, his face and chest were flush.

“Sir?” Morgan looked from him to his desk and then back up to meet his stare. “Oh, damn it! I forgot your after-run things. I’ll get them. Hang on.”

She quickly jogged into the small room and grabbed the items. When she rushed back to his desk, she set the items well off to the side. She wanted plenty of space in case he responded the way she wanted him to.

“Morgan, I’m quite tired from my run, but you leave me no choice. Get in the position.”

This time she couldn’t hide her grin as she hurried around the desk. She suspected that he knew exactly what her plan was, but in the moment, she didn’t care. Her body wanted to feel his hands on it. There will be plenty of time later for embarrassment and self-loathing.

As Mr. Slade came around behind her, Morgan’s clit was already tingling. She could feel his body heat as he stood there, waiting. She heard him take a deep breath before moving her skirt. A moan came off her lips at just this smallest move from him.

When her ass and pussy were exposed, her eyes closed slowly as her hands started to claw at his desk. He let out a masculine moan as his hands rubbed over her skin. This sound and his gentle hands made her instantly feel better. Morgan took these as signs that he was also enjoying this.

“So my disobedient little one needs another reminder?”

“Yes, Sir.” Her voice was breathy and even she could hear the neediness in it.

With no more pauses, Mr. Slade’s hand came down on her ass. She moaned and it quickly rolled into a purr.  She felt her nipples harden as another hard smack met her ass. A whimper left her throat and he slapped her again, harder. Morgan felt her skin start to burn which was mixing with the throbbing of her clit.

“What?” Morgan spoke through harsh breaths.

“We both know what you want, but I want to hear you say it.”

Morgan blinked rapidly while still clawing at the desk. She was unsure what she should do here. Her pussy was wetting further as she heard his deep breathing increase.

“Ask!” His voice was harsh as his hand came down hard against her ass.

Morgan yelled out a loud moan and then her words flew from her mouth without her full permission. “Sir, please. Touch me.”

A low satisfied growl came from behind her. She then felt his body press up against her right thigh. His erection pressed hard against her soft leg and she whimpered, knowing he was enjoying this play.

Mr. Slade then finally gave her what she wanted. Morgan gasped as she felt his fingers graze her bare pussy lips. His hand felt even warmer than it had on her ass. He ran his fingers up and down her lips several times before venturing forward to find her clit.

Morgan whimpered again as he pressed hard circles against it. Her climax was close already and she had no doubt that Mr. Slade knew it.

“This is what you were looking for, wasn’t it?” Again, he moaned behind her.

“Yes.” Her voice was a whisper now.

Suddenly, his fingers left her clit but soon entered her pussy. Not slowly, he pressed one finger into her. She whined as he slid it in and out a few times before adding a second finger. She tried to quiet her moans, but it was no use.

Help wanted. Submission required. Seriously. Connor Slade, is a workaholic to say the least. Outside of work, he has needs that far surpass the normal sexual ones. He wasn’t look for forever when the new temp hired on or the possible outcome of their chemistry. Connor and Morgan were totally different from each other, however, passion and work brought them together, and I saw their relationship change from boss and secretary to so much more. I loved the characters. Morgan is just out of a bad relationship and looking for work to distract her so, when she landed this one through one of her temp agencies, she never thought or had an inkling of what this job and her new boss would require of her. She certainly never thought that she would fall for her new boss. Her Temporary Boss has plot that I’ve read many times before but what makes this books different was how it was written and the characters themselves. They grabbed my attention with their intensity and passion. Sure it’s a short read but there’s a lot to this novella. Can’t say it was a light-hearted read, definitely an eye opener for a first time reader of erotic romance. A good book, it wrapped up too fast. I wanted to stay in Connor and Morgan’s world a while longer to see where their relationship would take them. The author left the ending open for future stories. This is one reader who’ll be watching a chance to return to Slade, Inc real soon.

This is the first book I&quot;ve read by this author and I really enjoyed it. It&#039;s a short, hot and sexy read. Connor hires Morgan as a temp for his business. Morgan has just come out of a bad relationship where her boyfriend had been cheating on her. She finds out that Morgan hires temps to relieve his &quot;stress&quot; for a short time and she decides to go along with it. Of course, her feelings get all tangled up. I was a little put off by his attitude but as the story went on, I was cheering for him to realize how much he cared for Morgan. I won&#039;t give away the ending so it won&#039;t be spoiled but I would love to see the author write another story to go more into the relationship of Connor and Morgan. I found myself thoroughly enjoying the book and will look at others by Ms. Williams.