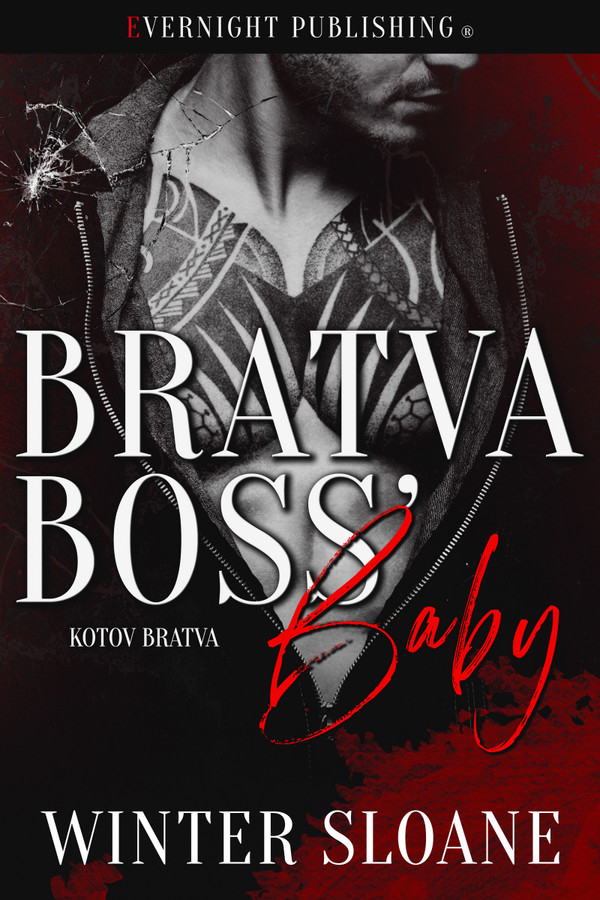 Viktor: Ava’s too pure for the likes of me but it's too late for her to run. The moment Ava entered my radar, she became my prey. I didn’t become the Pakhan of the Kotov Bratva by playing nice. I see something I like, I take it for myself. Fate put her in my path and it’s rude to refuse a horse’s gift in the mouth. When I learn she’s carrying something precious, I’ve no choice but to make Ava my bride.

Ava: I never imagined one wild night with a random stranger would lead to my downfall. Viktor’s possessive, ruthless and imposing. Desperation pushed me to work for him. That was before I knew who he truly was. Monster. Bratva boss. Father to my unborn baby. My future husband. He’ll ruin me before long, but it is so bad being his?

Viktor’s mood remained grim as he drank his second beer of the evening. He took an empty seat by the bar. A few bold women had already asked him if he wanted to buy them a drink. One glare from him sent them running. Viktor could lose himself in a woman tonight, but none of the women at the bar interested him.

A curvy blonde and her friend took the remaining seats on the bar. Viktor studied them with interest. The blonde’s face looked pinched, as if she was trying too hard to look cheerful but was failing spectacularly.

Viktor took a sip of his beer. Maybe she’d had a shitty day, just like him. He definitely liked how her dress fit her sexy body like a second skin. Viktor didn’t miss the fact her dress matched the color of her eyes. Sky blue.

He couldn’t keep his gaze off her face. Her plump lips. He wondered what she’d taste like as he speared his fingers through her blonde curls. How would she react if he cornered her against the wall and trapped her? Would she struggle like a prey animal or would she fight him off, only to realize she preferred to submit?

God. It had been ages since a woman intrigued him. Viktor met her gaze. She couldn’t hold it. She ducked her head and pretended to be interested in whatever her friend was telling her. Viktor was so used to women throwing themselves at him. He didn’t even need to lift a single finger.

This woman seemed shy—which only fueled his hunger for the hunt. He bet all that shyness was just a mask. Underneath, who knew? She might be a wildcat in bed. Someone who hungered for a man like him to take control and bend her to his whims.

By the time he left her in the morning, she’d be craving him. Too bad he didn’t do commitments. Women were distractions men like Viktor couldn’t afford. She’d make for a wonderful memory though.

A man in his late thirties stopped in front of the blonde’s friend and flashed her a smile. That annoyed Viktor. No one would get between him and his prize. Viktor stood from his seat and made his way to his potential conquest.

“Why don’t you let me buy you a drink, beautiful?” the handsome dark-haired guy in the tailored suit asked.

He looked at Ava, then focused on Gina. What a dick. It was like he couldn’t decide if he wanted Ava or Gina. Gina and she traded knowing looks.

“Sorry, pal. You’re barking up the wrong tree,” Gina said. She put her arm around Ava’s shoulders. “Me and my girlfriend here want some time alone.”

Ava prevented a giggle. This wasn’t the first time Gina and she pretended to be a couple to fend off assholes who didn’t know how to take a hint. The guy looked surprised. Ava thought they’d finally get rid of him, but he flashed them both a creepy smile.

“Then why don’t you and your girlfriend come over to my place? We can have some fun.” The guy winked at them suggestively, as if that would persuade them to consider his ridiculous proposition.

“No thanks,” Ava said firmly.

She’d had it with this asshole. He was ruining her night. Ava wanted to have some fun. To drink and dance. She didn’t want to think about losing her job and eventually losing everything else—like her apartment, tonight. “There are plenty of fish in the pool. Why don’t you try using those cheesy lines on someone else?”

The guy’s face turned red as a tomato. He balled his hands into fists. “Who the hell do you fat bitches think you are?”

Ava froze and desperately looked for the bartender. They knew Eric, the bartender and owner of the Rum and Monkey. Eric was ex-military, and they could rely on him to throw out jerks like this one. Too bad Eric was busy making drinks. Shit.

Ava blinked. It was the huge, quiet, and dark-haired Russian sitting in the corner. Ava thought he was Russian because she heard him talking to another guy. She’d taken a beginner class in Russian but eventually dropped the course.

Gina said the guy had been checking her out all evening, but she didn’t quite believe her. Gina kept pushing her to go up to him, but her shyness got in the way. Ava never approached guys. She was terrified she’d say the wrong thing. Besides, he intimidated her a little. Standing a few feet from her, Gina, and the annoying prick, the new stranger towered over everyone else.

Ava would’ve called him a bruiser, except he looked like a cross between an escaped convict and a billionaire. He had miles and miles of muscle. Black ink peeked from his neck and hands. The suit he wore looked tailored to fit his ridiculously massive frame.

“Hey buddy, I got here—” The prick harassing them took one look at the stranger and paled.

“Leave now,” the stranger said. His black eyes bore into the prick’s.

“Okay, I don’t want a fight.” The guy finally slunk away.

“My pleasure.” The guy’s deep and sexy voice sent shivers down her spine. “You look rattled. Maybe a drink would calm you down?”

This guy was definitely looking at her and her alone. It was like Ava was the only thing he could see, like the rest of the people in the bar didn’t matter.

She was about to refuse him, to tell him she wasn’t interested, but Gina cut her off.

“Ava would like a drink. You also haven’t introduced yourself,” Gina said.

Viktor offered his hand to Ava. She hesitated, then shook it. Every inch of Viktor screamed danger. Her mother always told Ava to avoid bad boys when she was growing up. She’d always dated boring vanilla guys. Viktor wasn’t her type at all, but something about Viktor drew her to him.

“Nice to meet you, Viktor,” she said.

“Ava, I forgot I had an emergency at home.” Gina winked at her.

Ava shot her a wide-eyed stare. Gina gave her a thumbs-up sign before leaving her alone with Viktor.

“More beer?” he asked, taking the stool Gina had occupied.

“Sure.” Ava nervously twiddled her thumbs as Viktor ordered her and himself more beers. “I’m sorry, but I didn’t come here to meet anyone. I just wanted to go somewhere where I can forget my problems for a little.”

Viktor seemed so big and intimidating, and yet she couldn’t help but imagine what it would be like if he kissed her. Took her home. She bet a man like Viktor wouldn’t, couldn’t be gentle. Would he be able to give her the kind of sex she secretly craved?

Wow so exciting to read this mafia book! It’s interesting and engaging! It keeps you on you toes following the drama and what will the characters will do to stay together! I received a free copy of this book via Booksprout and am voluntarily leaving a review.

This story is about Ava and Viktor. Viktor owns a few clubs and while he was out drinking at one of his clubs he noticed Ava they had a few drinks together and walked out together knowing it was a one night stand. The one night stand ended up extending after she told Viktor that she lost her job, he decided to give her a go. Ava told Viktor that she is pregnant, will he want to keep the unplanned baby? What will Ava do now!

This is the first book in a new series called Kotov Bratva. It&#039;s a fast-paced and standalone book that will keep you engaged from start to finish. This is the story about an out of work accountant (h) and the leader of the Kotov Bratva (H). They spend a night together and.... You&#039;re just going to have to read the book to find out what happens. I received a free copy of this book via Booksprout and this review is my own opinion.

Take an out of work accountant, add a one night stand with the leader of the Kotov Bratva, who needs a new accountant because his just stole a ton of money from him.....sounds like a great book, right?! Viktor and Ava are great characters, resilient, strong, and wow the chemistry is hot. This book has great pace, steam. action, twists, and a ton of drama. First book in the series and I can&#039;t wait for more from this Bratva. Winter Sloane has a hot on her hands!!

The addition starts with the book cover….yeah…yeah…yeah don’t judge a book by its cover they say ….well we all do it and this one here it is the scratch to your itch or better yet the filling to your oreos! Speaking of filling…..wait, that’s for later. Within the first chapters you get the panoramic view of whom you’re dealing with! Bad boy….check Bod boy’s crazy brother/friend…check Bad boy’s Kryptonie…check ….check and check By the time you’ve figured out who is who and what is what, you’re already hooked, and you may as well give up the fight and prepare yourself for an all-nighter! Can’t say I didn’t warn you. Ava is sweet, innocent mostly and just losing her job she out having a drink or two ends up having a one-night stand that is all it was supposed to be one night. Viktor sexy as all get out Bratva boss who hired Ava after one night to be his accountant bring her into his world. The chemistry between them wasn’t just for one night it was intense, the magnetic pull can’t be ignored and working together isn’t helping the situation. After realizing that one night left her pregnant giving her no other choice but to tell Viktor will he accept it, will he protect her, will he keep her and can they find happiness?

Ava and Viktor relationship was suppose to be a one night stand, however after meeting each other in one of Viktor&#039;s clubs they both have a few drinks and leave the club together since Ava lost her job. Viktor needing a new accountant decides to give Ava the job after their one night. Moving further along she ends up pregnant and Ava is not sure what to do and decides to tell Viktor. This is my first read by this author and hope to read more of the stories.

Claimed by the Crime Boss by Winter Sloane

Indebted to the Bratva Boss by Winter Sloane