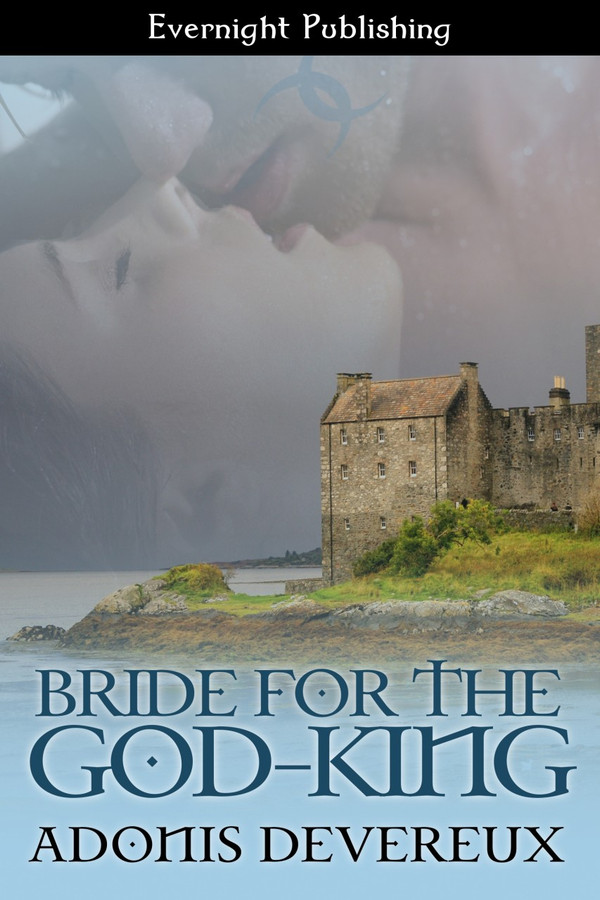 The telepath Elemia has spent her whole life training for her chance to marry the god-king in his far-away capital, but then she meets Abbas—and everything comes apart as they fall for each other.

As a half-breed, Abbas is barely tolerated by his own people, and Elemia is cast out of her order of novices for being with him. As punishment, Elemia is to be sold in marriage to Abbas' older brother, though her mind has already joined with Abbas'. The lovers would do anything to avoid this untenable situation, but even if they escape, they will still have to deal with the god-king.

Abbas laid out the pieces of clothing: first a thin, white smock, then a tight, blue bodice with laces that he laid on top. He also showed her two skirts, one slightly longer than the other. They were woven in red and blue patterns. “And, of course, your riding boots. You will find yourself ahorse more often than on foot.” Abbas was thrilled that he could teach Elemia about his ways. “I'll step outside. When you've tried these on, call me back in.” He did not want to go. He wanted to stay and admire the lithe body she had hidden under her robes.

“Thank you, Abbas. Yes, I will call you back in.” But she did not move toward the clothes. She simply stood and gazed at him.

Abbas tore himself away, not trusting himself to study her body further, and his head spun as he closed the door behind him. Ahketh was standing there scowling at him, and Abbas's euphoria evaporated. The Ausir knight represented everything that separated him from Elemia: the Order and its absolute control over her life, and the enforced marriage to Cathal.

“I hate you,” Abbas growled.

Ahketh chuckled. “I am not too fond of you, either, half-breed. The sooner we are away from each other, the better.”

Abbas brooded until he heard Elemia calling his name, more quickly than he had expected.

“What's the matter?” he said through the door.

“I need help. I am not sure what to do with this–this thing.”

Abbas's gaze darted to Ahketh's face. What would the knight think of him helping Elemia with her clothes? But Ahketh did not seem to care. He was staring off into the space before him.

Abbas re-entered the room, wondering if he might find Elemia half-naked. Instead, he found her fully dressed in the shift and skirts. In her hand, she held the bodice.

“Not bad for a first try.” He laughed a little louder than he felt, trying to cover his surprise. Elemia's breasts were round and full, larger than he had anticipated. He could make out little else save the slim curves of her hips. He cleared his throat, approached, and took the bodice. “This goes on before the skirts, and part of it tucks under them. May I?”

Elemia spread her arms out wide and looked wonderingly into Abbas's eyes. “Please.”

Her innocence and trust both aroused Abbas to fever pitch and hardened his resolve to abuse neither. “Here, let me.” Abbas reached out and loosened Elemia's skirts, untying them and letting them fall to the floor. The shift went to her knees. He admired the shape of her leg, strong and lean, as it disappeared up into her smock. But then he saw the tattoo, and the creeping ivy across her ankle brought him up short.

“The chieftain said my ivy will never bloom.” Elemia must have read his thoughts, or, more likely, his disappointment was plain on his face.

Abbas took what comfort he could in that promise and continued his work. He clasped the bodice around Elemia's waist and laced it from the bottom up. He worked slowly. He wanted to take his time and enjoy the feel of her flesh beneath his hands. With each pull of the lace, Elemia's form became more defined, more visible to Abbas's appreciative eye. Elemia was slender and small, but the fullness of her breasts reminded him that she was not a child. The bodice stopped short under her bosom, leaving them covered only by the shift. As he tied off the lace at the top, his gaze traced the outline of her firm breasts. Her erect nipples were visible through the thin fabric.

“Is it too tight?” Elemia asked. “I cannot really breathe.”

Abbas knew that the bodice was not too tight. “It's fine. It just takes some getting used to. You've spent your life in a flowing robe.” It pleased Abbas to think that Elemia was becoming as aroused as he, for if anything was too tight, it was his breeches, straining to contain his erection. He slowly knelt and picked up the skirts, raising them around Elemia's hips, letting his hands brush against her buttocks.

Elemia sighed and reached out to tuck a stray braid back behind Abbas's ear. As he wrapped the skirts around her waist, Abbas could feel Elemia moving against him. She was reacting the way her body wanted her to, but she was ignorant of the ways of sex. He realized had she known, she would have kept a tighter rein on her physical response. Abbas smiled to himself and tied the skirts in place, looping the belts through the bodice according to Rolador fashion. He stepped away from her then to appraise her, but he made sure he kept his hands folded in front of his straining breeches. “I have never seen a lovelier chieftainess.” He had never seen a lovelier woman. It still amazed him that others did not see Elemia's beauty.

“You flatter me.” Elemia smoothed down the bodice. “It is kind of you to think so. You are the perfection of two races, more beautiful than either alone.”

Abbas was glad to hear the voices of Volshaden and Jhaleed in the antechamber. He could not trust himself any longer in the room with Elemia, for he wished to seize her, rip the bodice from her breasts, and lick her rosy nipples. He wanted to throw her on the bed, tear off her skirts, and thrust his throbbing phallus into her. He knew that her body would accept him; surely it had already prepared itself. She would wrap her legs around his hips and pull him in deeper, all the while devouring his mouth with her own.

“They are calling us.” Elemia brought Abbas back to reality.

Like A.D.&#039;s first book (Worth his Freedom), this is a beautifully intricate fantasy tale with a healthy sprinkle of explicitly erotic love. It is also set in the same world, but in a different region entirely, with different political and social customs and issues. There are Ausir cities and gods, and humans are the outsiders here. The complexity of the epic-scale world building is pretty stunning, and the two main charachters are very engaging, especially Elemia, a rare case of shy yet really strong heroine. I very much enjoyed the slow unravelling of the plot, of which the romance between Abbas and Elemia is only one strand (although everything connects to it very charmingly). Looking forward to A.D.&#039;s next book!

Having read Adonis Devereux&#039;s first book “Worth His Freedom,” I was very excited to read this book as it is set in the same beautiful world that the author created. I have to start off by saying that this is a real hidden gem that I wish more people discover this book and author. I became lost in the author&#039;s fantastical world that always reminds me of Games of Thrones and Lords of the Rings. A far away world where there are no cars, no modern facilities, but an archaic society full of rich rituals, loyalty and lives bound by obligations to one&#039;s position in life. Being born a telepath Elemia was sent to a convent to prepare for the prospect of being the bride for the God-King which had been prophesied thousands of years ago that his true soulmate and wife will be discovered among an Ausir telepath. Up to this point not one potential bride has been the one, thus according to ritual these pure maidens who are not prophesied to be the one for the the God-King are sold as wives. Elemia on one hand is unique as an Ausir telepath in that she is plain and simple (the telepaths of the convent are known for their beauty) and is kept away from others. One day when several chieftains and lords enter the city to obtain brides, Elemia is cast aside due to her plainness and is assigned the task to info the master of any humans who may approach the city. While keeping watch from her post she sees Abbas which sets stage for the encounter. Abbas enters the castle on behalf of his step-brother ( a human) and chieftain to obtain a wife. However, once the High Mother sees Abbas, a half-Ausir/half-human she wants him executed and Elemia prevents it. Both Elemia and Abbas are drawn to each other because the two see within each other the beauty that lives within them. Each knows what it is like to be treated like an outsider, never having anyone truly cared for them completely until now. Abbas is drawn to Elemia for her inner strength, goodness, and self-sacrifice to protect him. Elemia sees Abbas as perfection and the notion someone so beautiful both inside and out being harmed pains her soul. Both embark on a relationship that is full of barriers set to keep them apart. I completely fell in love with both of these characters for the self-sacrifices that they would endure for each other and the depth of their love for each other despite the odds against them. They saw no one else but each other as their soulmate, completing them and providing them happiness that has been deprived of them all their lives up to now. As the story continued my heart ached for them because of the indignities and injustices that both suffered that I wanted to scream “please let them be happy!” at times. To add to that point, once I thought things were finally going their way a twist occurred in the story and once again my heart ached for their loss. This is a beautiful love story that grows from despair and heartache and demonstrates the power of self-sacrifice, perseverance and dedication that occurs with love. It was an emotional ride that at times I was in tears. This book had one of the most beautiful and touching endings I have read in a while that it may leave readers in tears (I became very choked up and cried at the end because of the beauty of it). I highly recommend this book.