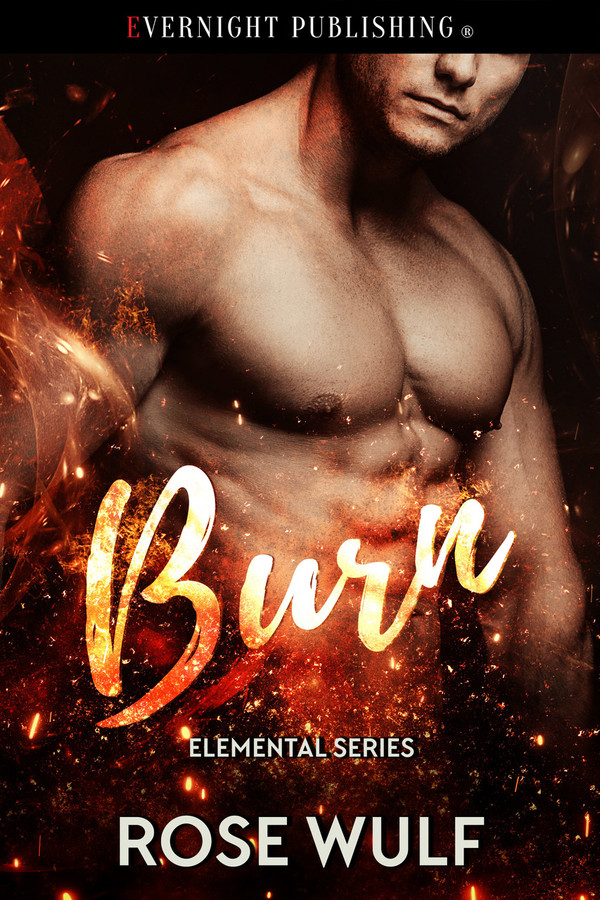 Arianna Carosella moved to the small coastal town looking to start fresh. New town, new job, new life—the whole nine yards. She wasn’t looking for a man. She certainly didn’t expect to meet one with a secret as hot as the desire she felt every time she looked at him. But chemistry or not, was any man worth being struck by lightning—twice?

Dean was the last bachelor standing among the Hawke brothers. Their deadly feud with the weather-manipulating Matthews family didn’t seem strong enough to stop the mysterious power of love—for those who found it. Dean flirted with a beautiful stranger and the next thing he knew she had an electric arm around her throat. He had no choice but to reveal his fire in order to save her.

He never expected her to come closer...

“You were right about this view,” Arianna declared as she pulled in a long, deep breath of the salty air. The sun was setting on the horizon, but the fog was still far enough out that it didn’t spoil the view. The colors in the sky were warm and bright—blurring shades of orange, pink, and something near lavender. The sun reflected over the water, like it was sinking straight beneath the surface. She’d seen a few sunsets over the ocean since moving to Darien, but somehow this one was a hundred times better. She doubted it had all that much to do with her higher vantage point.

“Glad you think so,” Dean commented from beside her. She slid her gaze to the side without turning her head, sneaking yet another glance at him. He was standing straight, hands tucked into his pockets, the edges of his lightweight jacket just barely dancing in the breeze. But what struck her most was how he almost seemed to be glowing against the sunset. Like it was whispering a secret in his ear.

Feeling ridiculous, Arianna returned her attention to the sunset. Already the world around them was starting to darken, like a blanket slowly falling over them. It was hard not to realize, in that precise moment, how alone they were. They were standing on the side of a cliff, in the outskirts of town, surrounded only by towering pine trees. Their cars were parked at the end of a trail a little way back, and the only flashlight Arianna currently had with her was the app in her phone. For all intents and purposes, they were completely isolated. Alone with a man you’ve only known since yesterday morning.

So why did she only want to get closer?

“Arianna,” Dean began unexpectedly, his tone oddly somber, “I think it’s time to talk about the elephant in the room.”

Blinking, she turned to properly face him, finding he was already watching her. Still she could see the faintest reflection of the fading sunset in his blue eyes. “What elephant?”

He frowned, and it did nothing to dampen his appeal. “I’m dangerous, in more than one way.” He paused, exhaled, and as she was processing the subtle increase in temperature around them, he continued, “I don’t usually lose control like I did earlier, but these people hunting us … you don’t want to get mixed in with this crap, Ari.”

She studied his expression, watching him watch her for her reaction, and said nothing for a long minute. It was hard to decide whether she thought his attempt to protect her was sweet or frustrating, but it was much easier to decide she liked the way he said her name. Finally, she took a breath and deliberately stepped closer, wrapping her arms around one of his and tugging him away from the cliff as she said, “It’s getting colder already, let’s get out of here.”

He found her eyes with his stare, letting her lead the way, and his frown deepened. “I’m serious, Arianna.”

She stopped and released his arm in order to plant one palm over his chest. She could’ve sworn she felt his heart jump, but she ignored it and held his gaze stubbornly. “I appreciate your concern, Dean,” she offered honestly. “But I’m a big girl. I’m not going to let some lunatic decide who I spend my time with.” She paused and her hand slid up slowly as she found herself leaning in, instinctively drawn in by his warmth and strength. Her voice lowered to a whisper as she added, “And you don’t scare me, either.”

His Adam’s apple bobbed and his hands landed on her hips, his touch warm even from the outside of her clothes. “I could change your mind,” he rumbled even as he pulled her closer.

She could feel his breath against her skin now and it sent a delicious round of chills dancing down her spine. Her fingers brushed the underside of his jaw and she murmured, “Or I could change yours.”

He grunted something in the back of his throat as the last of the evening chill was chased from her skin.