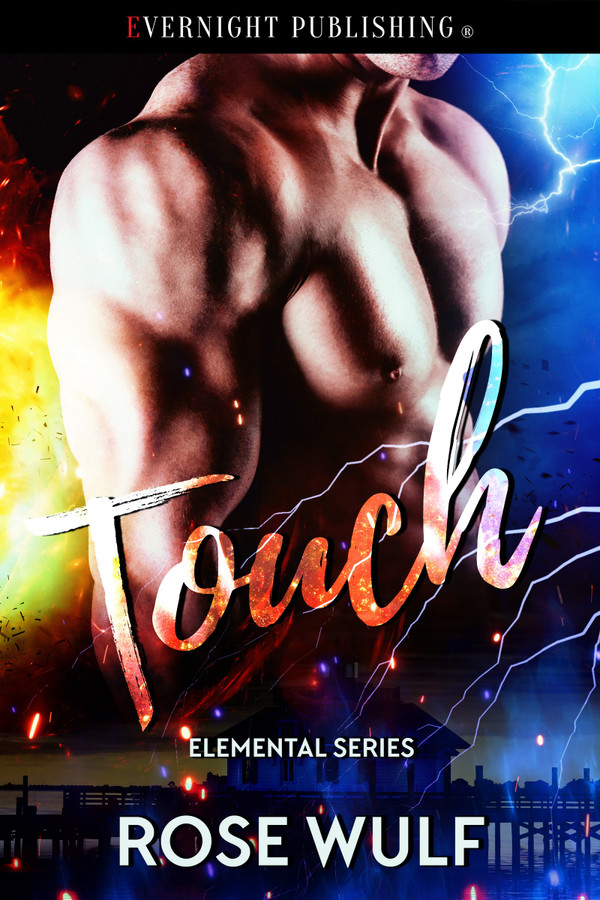 After two and a half years of silence, Angela Hawke hoped the war between her family and the Matthews family was over.

Another bad break-up behind her, Angela decided to go home. She didn’t mean to run into Vaughn, let alone to realize she’d never let go of the feelings she’d had for him. But Vaughn had been there for her for as long as she’d known him. To try for more might be too much of a risk.

Then Eric Matthews returned and when the lightning came down, Angela ran straight to Vaughn.

Vaughn Prescott was a lot of things, but he was not superhuman. In the renewed war between elementals all he could do was provide Angela safe shelter. That was what he thought, until he took a bolt of lightning to the chest—and walked away.

The centuries-old war between elementals comes to a head. Not everyone makes it out alive...

“Get ready to run,” he said as he jerked the car into park. He purposefully neglected to cut the engine before releasing his seatbelt, not wanting to tip his hand.

Vaughn pushed the buttons to unlock the doors and looked back at her, needing her to understand him. “I have a plan,” he assured her, “but we have to get out first.”

He could see her hesitation. Her instincts were probably insisting he’d lost his mind—and they might have been right—but she didn’t argue. Instead, she released her own seatbelt, nodded, and together they threw their doors open and jumped to their feet. She would strangle him when she learned the details of his crazy plan, but at the moment, he was glad she was cooperating.

“Run!” Vaughn shouted, deliberately meeting Eric’s glare through the Bentley’s windshield. Even if his plan failed, getting lost in the thick gathering of trees was still safer than being stuck on a narrow, windy dirt road. He waited until he heard Angela’s feet crunching over the ground before turning and running after her. This moment was key. His plan would fail miserably if Eric opted not to give chase.

Eric’s ego was entirely predictable, however, and the crash of thunder overhead wasn’t loud enough to cover the sound of booted feet hitting the ground. “Prescott! There’s no use in running!”

“Is he after you?” Angela gasped as they barreled past the trees.

“Both of us, I’d guess.” It started to hail and Vaughn risked a glance behind them. They hadn’t gotten far enough away from their enemy yet.

“This is crazy,” Angela exclaimed. “We’re just going to get ourselves lost!”

“We won’t,” Vaughn assured her. He adjusted course without warning, caught her elbow, and yanked her with him.

Lightning crashed into the ground a few feet away from where they would have been an instant later. Angela cried out, too close to the raw electricity, and stumbled for a second as her fingers curled into his forearm.

Vaughn spotted a wide tree and pulled them both behind it, taking a moment to catch his breath as he strained his ears for sounds of their pursuer. It was hard to distinguish footfalls from the falling hail and leaf-rustling wind. I have to take the chance.

“What are we doing?” Angela mumbled, still working on catching her breath. She stood closer than usual, one hand curled in the sleeve of his tee, while she attempted to lean forward enough to see around the tree. “He’ll find us and I don’t have signal out here.”

Angela froze at his side and for a second, he was sure she stopped breathing. “What?” Her whisper was nearly inaudible despite the sparse few inches between her lips and his ear.

He met her widened, confused gaze with a firm frown, knowing full well she wasn’t going to approve of what he had to say. “We have to split up. Eric thinks we’re running together. When he sees me, he’ll figure you’re not far.”

Vaughn ignored her. “I left the engine running. Let me distract him and get to the car. Get out to the road. You’ll get a signal, you can call me some backup.” The last was said largely to make her feel better. He wasn’t worried about himself in the slightest. All that mattered was getting her the hell away from Eric Matthews.

“No!” Angela hissed, her fingers twisting in his sleeve as her eyes narrowed at him. “I absolutely will not abandon you here!”

“Come out, come out wherever you are!” Eric’s not-so-distant, taunting voice called, echoing through the wind and sleet.

Vaughn shifted, uncurled Angela’s hand from his sleeve, and pulled her closer in order to whisper fiercely, “Go, Angela.” They didn’t have time to argue about this.

But her refusal couldn’t have been more apparent. “I refu—”

He cut her off with a kiss, tugging her forward as he bowed his head and pressed his lips to hers. She froze against him for a beat, obviously surprised, before relaxing into him. He swept his tongue into her mouth, letting himself taste her, all the while knowing the clock was ticking.

The world flashed around them. Something cracked and exploded from another bolt of lightning.

The kiss broke, Angela breathing too hard, and Vaughn’s grip tightened for a long second. He wanted to linger, check to be sure she was all right, but he knew the ultimate answer to that question would be “no” if he didn’t get moving. When she dragged her gaze back to his, he forced himself to say, “Get going, Angie. I’ll throw him off.” She opened her mouth to argue, but there wasn’t time, so he pushed her away and spun her around, pointing her in the necessary direction. “Go.”

When he released her, his attention already turned to the forest behind the tree, she reached out and caught him, recapturing his attention simultaneously. Their gazes held for another second and she whispered, “Don’t you dare die on me.”