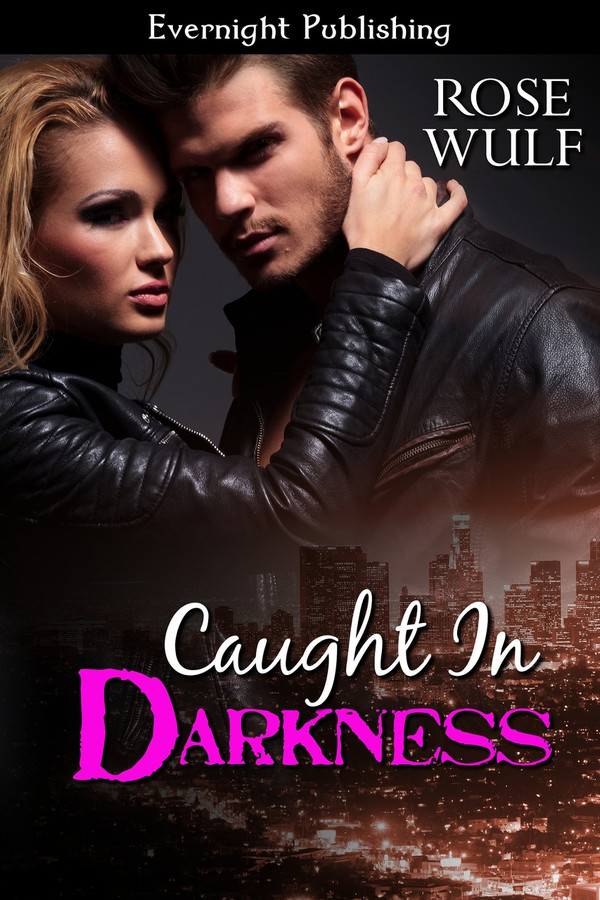 Veronica Wyndham had no idea that vampires were real, let alone that her new favorite customer—Tall Dark and Handsome—just so happened to be one. And she never imagined she’d overhear a robbery plan with murderous potential while eating lunch in the park. Making those kinds of enemies just wasn’t a good way to spend a day.

Seth Hunter knew he should have been grateful for Veronica’s unintentional help in exposing the traitors, but all he could worry about was how much danger she’d just landed in. Instinct had him taking it upon himself to keep a protective eye on her, but even then he had to keep his distance. If she found out the truth about the world around her, she would surely get Caught in Darkness.

Veronica couldn’t help but feel a little excited and a little self-conscious as she stepped into the restaurant at twelve-thirty. She knew that they weren’t really meeting for a good reason, but that didn’t stop her from smiling. And it certainly didn’t stop the butterflies in her stomach from taking flight as soon as the first whiff of marinara sauce and baked cheese wafted over her. Now, do I find a table or wait in the lobby?

The thought had barely crossed her mind when she turned her head and found her gaze focused on a dark figure sitting in a corner booth. But this dark figure was the good kind of dark because he was the man she was looking for, and despite his seemingly-permanent sunglasses she knew he was looking right at her. She took a deep breath and started toward the booth, trying again to remind herself of what they would actually be talking about. They weren’t about to have a pleasant, lighthearted conversation and it would do her good to remember that.

He slid smoothly out of the booth and stood as she approached the table, and her heart tripped. The man had honest-to-goodness manners! Some jaded part of her had just assumed that any man who qualified as ‘sexy’ (and there was no doubt that he owned the category) was pretty much allergic to good manners.

“Thank you for meeting me,” Seth said, his deep, rich voice sliding effortlessly from his lips to her ears and washing over her.

She offered him a warm smile and assured him, “It’s not a problem,” as she slid into the indicated side of the booth seat. “Thank you,” she added.

Once she was seated Seth reclaimed his seat, and then he did the most unexpected thing. He reached up and slid his sunglasses off of his face, calmly folding them and setting them to the side of the table.

Veronica was breathless as she watched, telling herself not to stare despite knowing that that was exactly what she was doing. Not only had she not expected him to do that, but she couldn’t have predicted the eyes beneath those all-concealing lenses if she’d tried. And she had tried.

Seth Hunter’s eyes were a fierce, striking black. Or what she would have labeled black if black irises were even possible. And she supposed the darkness of his eyes could, arguably, be creepy or unsettling, but she felt none of those things. It was as if his eyes were piercing straight to her soul, and they held her captive without effort. They were the perfect eyes for the man sitting before her.

The waitress bounced over to their table, casually asking if they knew what they wanted to drink and simultaneously tearing Veronica’s attention away from Seth’s newly-exposed eyes. In the time it took her to gather herself, Seth ordered a cup of coffee and placed his meal order as well. Fortunately, when the waitress turned some of her attention to Veronica, she was ready and easily ordered an iced tea to accompany her spaghetti and meatballs. It was a large meal to order for lunch, but she didn’t care; she loved their spaghetti.

Once the waitress was gone Seth turned his attention back to Veronica and asked, “Do you mind if I ask you about that ‘small paranoia attack’ you mentioned earlier?”

That was what she’d needed. It was almost disturbing how quickly that simple question managed to put her priorities—and her focus—back in order. And she wouldn’t allow herself to be disappointed about it, either. Instead, she nodded and explained the two instances from the night before. “And if it weren’t for that second one,” she added, “I wouldn’t even have given it another thought. But there was something about that man walking away…I swear he wasn’t there when I walked out to my car.”

Seth was nodding slowly, clearly mulling something over in his mind. It was a moment before he offered, “It is always possible that your mind was playing tricks on you last night. After what you overheard your subconscious was likely dwelling on it even while you thought you were focusing on other things.”

“I get that,” Veronica replied with a slight nod. “But there’s still a voice in the back of my head telling me that I know better.” She paused, studying him, and realized that she had nearly missed a cue in his body language. “And you agree, don’t you? You don’t think it was just a case of hyper-active paranoia either.”

His dark, serious eyes locked on to hers again and he shook his head. “Honestly, no. I don’t think you were being overly paranoid.” There was another beat of hesitation before he added, “I went looking for them last night, and none of them were home. They didn’t attempt the burglary, but then again, Robert didn’t go out. I thought that would make finding them a little easier, but whatever they were doing…they were out somewhere.”

Veronica collapsed into the back of the vinyl booth cover. She wasn’t surprised to hear that, but she hadn’t really wanted to hear it, either. It was a long minute before she found enough of her voice to say, “So then one or more of them could have been following me.”

“Unfortunately,” Seth declared with a scowl. His pause was shorter this time before he said, “I realize we don’t know each other very well, but if you even think you see one of them again I want you to call me immediately.”

A frown dipping her lips, Veronica asked, “But why? If I think they’re following me then shouldn’t I call the police?”

There was something off about the set of his jaw before he answered, “You could do that, too, of course.”

She got the distinct impression that he didn’t particularly want her involving the police, which made no sense. Weren’t people supposed to call the police when they thought their life was being threatened? Unless…

This was a good story with good main characters and plenty of action. Seth turned out to be quite the good guy in his own way. He treated Veronica like a &quot;normal&quot; gentleman would even though he was a tremendous danger to outlaw vampires. I have to give Veronica points for being a gutsy woman even though she was a bit of a wimp when dealing with her mother. But her sass and boldness will get her through some truly dangerous things. I like how most of the bad guys were taken care of and Seth and Veronica get their version of H.E.A. &quot; I voluntarily read an advanced reader copy of this book through Netgalley. And these are my honest opinions about it.”

Girl meets vampire - girl gets involved in vampire conspiracy - girls friends get sucked into it - meanwhile girls overbearing mother just keeps trying to butt in and match her up with the overbearing guy she thinks her daughter needs. A quick read - good for weekend or vacation entertainment.

Veronica Wyndham unintentionally helps Seth Hunter in exposing traitors but now she’s been drawn into the world of vampires and caught in darkness in this riveting paranormal romance. Veronica inadvertently overhears some startling information that makes her the target of an enraged vampire and Seth tries to keep an eye on her and protect her while at the same time keep his distance and the reader can’t help but be drawn into the darkness with these compelling characters as their worlds collide in some unexpected ways. Their attraction for each other is obviously strong from the very beginning which leads to some steamy encounters although Seth knows that a relationship would not be a good idea and the steady to fast paced plot keeps readers on their toes with suspense, excitement and romance. Excitement and anticipation builds throughout the story as the danger to Veronica escalates and some unexpected twists surprises the readers as well as the characters and adds to the excitement with some thrilling action scenes with another enemy alters Veronica’s world even more. Well orchestrated events draw the readers in while the scenes and details capture the imagination making it easy for the reader to picture every scene as it happens. The world is full of intriguing characters and interesting and different elements that adds spice to the story and makes it a little different from other vampire stories and the author has caught my interest but I wasn’t too happy with Veronica’s character. I just can’t make up my mind whether I like her not and of course that’s totally on me so I will have to read the next Night Shadows book to see how things go…I’m kind of hoping its Jasen’s story.

Caught in Darkness begins with Veronica Wyndham working in a coffee shop. In walks Mr. Tall, Dark and Handsome, who we later discover is Seth Hunter. The attraction is subtle but instant. In many novels the entirety of the plot will revolve around the planting, growing and harvesting of this attraction. And for many paranormal romances that is what is to be expected. But not this one! Unfortunately for Veronica she overhears the bad guys making plans to commit a crime. Unbeknownst to her, they are not ordinary criminals. Instead they are vampires with an ‘enforcer’ of sorts on their trail. Enter Seth Hunter. Vampire. Now, imagine all the scenes you may have read when the human heroine discovers that A) Vampires exist and 2) She has the ‘hots’ for one. Ms. Wulf avoids all the stereotypical ways female characters discover that vampires live among us. There are no hysterics, tears, panicked streams, or (god forbid)fainting. Veronica is surprised by curious. Her response is so refreshing. The readers doesn’t have to endure pages of self-denial where the heroine laments how he could have been the one if only he wasn’t a blood sucker… Instead Ms. Wulf deftly puts her characters in a situation where the couple get to know one another and the attraction builds. This makes the first kiss all the sweeter. His arms had locked around her, holding her tightly to his chest as he took control of the kiss. One of his hands was tangled in her loose blonde hair, the other curled over her hip, and his tongue wasted no time in sweeping into her mouth. He was taking his time mapping out the terrain of her mouth, stroking each surface in a way that made her moan against his lips. Without even realizing it she had wound her own arms around his shoulders and was clinging to him like a lifeline, her toes curling in her shoes Seth is wonderfully appealing and just the right amount of alpha without overwhelming. There is an elegance and romance to him that I truly appreciated. The narrative itself is well paced with a plot full of twists and turns that make for a great story and a fast pace. Ms. Wulf introduces the reader to a fascinating cast of characters and sets up future stories seamlessly. This is a sizzling great read.