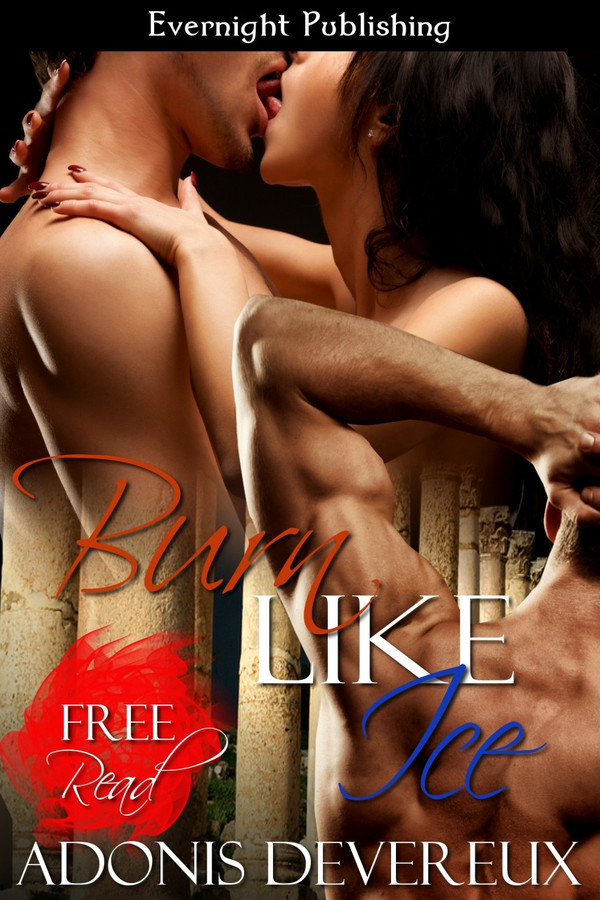 How can you love the mountain and the river, the very air and the deep fires that move through the secret places of the world? That's Kassius's problem, for he is in a love affair with a mighty elemental being who also happens to be his Emperor and best friend. But when his lover must take Rakel as his bride for political purposes, will Kassius be left out? Will he no longer feel the kiss that burns like ice?

She was lovelier than he had remembered, and he had to remind himself that she was now a full woman. Perhaps it was that glow which enhanced her natural charms.

“Lord Val.” She nodded to him. She was still dressed in Faror fashions, doubtless Arixus’s request. He was proud of his Faror heritage. “You promised to call me Rakel.”

Kassius looked up to find her staring at him, and when he caught her dark eyes with his, he could not deny his attraction to her. “Rakel.” He wanted to take the two steps to her and grab her around the waist. He wanted to tear her translucent, shimmering shawl from her and taste her dark flesh. Her neck begged him to kiss it.

“Kassius.” She spoke his name with tenderness. “I am glad to see you returned safely.”

“How is the Emperor?” Though Rakel stood before him the picture of loveliness, still he longed to see his lover.

“He is well.” Rakel cast her gaze to the floor and traced with her toe the mosaic beneath her feet. “I now know what you meant about his inhumanity – not to say that he is unkind, as the word is often meant to mean.”

Kassius chuckled, happy to see Rakel at ease with him. “Yes, I know what you mean.”

“He is at once attractive and repulsive, and I do not know what to think.” She glanced up at him through her dark lashes, and Kassius’s breath caught in his throat.

Kassius knew what she wanted. She was overwhelmed by Arixus. Kassius had been, too, at first. But Rakel wanted Kassius to make love to her; she needed a real, approachable man, a man who could share her feelings. This longing for real, mortal flesh and bone was what had first drawn Kassius to Rakel in Faror country. He worshiped Arixus and his elemental lovemaking, but as a man, Kassius needed something both more and less. He needed someone as human as he was.

Rakel stepped forward until she was nose to nose with Kassius. “I have been fucked by the sea and the wind, by the earth and the secret fires that run through the dark places of the earth. His elements run through me, even when we are not touching.”

Kassius reached out and took her trembling hands in his. The Lorin had left his indelible mark in her in a way that he had not done for Kassius. But everyone knew how much Arixus doted on his Faror brides – they were the symbol of his love for his father’s country. Kassius took her head and laid it against his chest, and there he stood for some moments, stroking her hair through her veil and comforting her. She sighed and hugged him around his waist. He thought of their first kiss and the words of devotion they had spoken to each other that day in far-off Faror. Fear struck Kassius then, for he felt his cock rising against her flesh, and he feared she would feel it. He backed away from her, holding his hands out before him. He could only imagine Arixus’s wrath at being cuckolded. And so Kassius fled down the corridor.

He found Arixus sitting in his peristyle with a stylus in hand writing onto a wax tablet. The Emperor’s body slave stood nearby and frowned at Kassius’s arrival, but the old man frowned at everything, so the General did not take it personally.

“Your Radiance.” Kassius used the term most often reserved for the High Priest of Jehiel because to him there was nothing more glorious than his friend, lover, and Emperor.

Arixus looked up and regarded him with the inscrutable dispassion of a bird of prey, a look that used to unnerve Kassius. “Welcome home, General. Report.”

“All is well. I have delivered the legions to Inum and given your orders to the commanders there. They will set out from Hinathlor in three days and strike west, subduing the land and its peoples, bringing more glory to Nirrion.”

“Do you expect much resistance?” Arixus turned back to his writing.

Kassius shook his head. “Against Nirrion legionaries? Hardly. The wild folk of the forests and hills will be subjugated in due course.”

Arixus suddenly stopped writing mid-sentence and handed his stylus and tablet over his shoulder to his slave. “Leave us.” Once the old man was out of sight, Arixus stood and came to stand just before Kassius. “What’s wrong?”

Throughout his report, Kassius had only been able to think of one thing: where did he and Arixus stand personally? Could Arixus have sensed something from him? “It’s just your wife, Arixus.” In private, he referred to his lover by his first name.

“What about her?” Arixus took Kassius’s hand and held it before him.

“What’s going to happen to us?” Arixus’s magnetism just drew the question out of him.

When I chose to review this short story, I wasn&#039;t looking for plot or great characters. I was just looking for hot sex, and the dirtier the better. This, with the various warnings attached, seemed to fit the bill. However, after reading it, I did discover the moving plot and compelling characters within. Although the story is short, it is a complete story. Kassius is a man sent to bring the beautiful and young Rakel back to his Emperor. Kassius is in love with the Emperor and they have been secret lovers for ages, so it&#039;s very hard on him that his mate is now going to marry a woman. Kassius battles feelings of both jealousy and secret love. While he would never betray his lover, he is also deeply attracted to the blushing bride. Rakel has never been touched by a man. All her life she&#039;s been prepped to become the Emperor&#039;s wife, and now that day has come. She&#039;s taken away from her family, friends, village and taken by Kassius to the man she&#039;s destined to marry, a man she has never met. She&#039;s anxious and scared, and Kassius is there for her. She develops a lusty desire for him, but how can she act on it and betray her new husband. So you can see the conflict right there. All the characters in this short story are driven by different desires and needs that are forbidden for them. Definitely great characterization and plot. Another thing I loved about this story is the setting. I&#039;ve never read anything set in a place like that before and I&#039;ll be sure to read other works by this author to learn more about this fantastical world where elementals and Emperors live. My only complaint about that is I wanted more description of it. I wanted to see the journey they traveled and see this country and village, and I wasn&#039;t able to imagine it. Now we&#039;re getting to my favorite part of any short story, the sex. Despite all the warning labels attached to this story, the sex wasn&#039;t hot. I wanted dirty and this wasn&#039;t. It was sensual, romantic, tender, and passionate. It wasn&#039;t &quot;I need to do you now&quot; one night stand kind of sex. It was &quot;I found my soul mate&quot; kind of lovemaking. The sex was written differently than in other erotic romance stories and I really liked the sensual vs hot writing style. Although short, this is worth the read. And here&#039;s the kicker. This book is currently FREE! Get yourself a copy today.