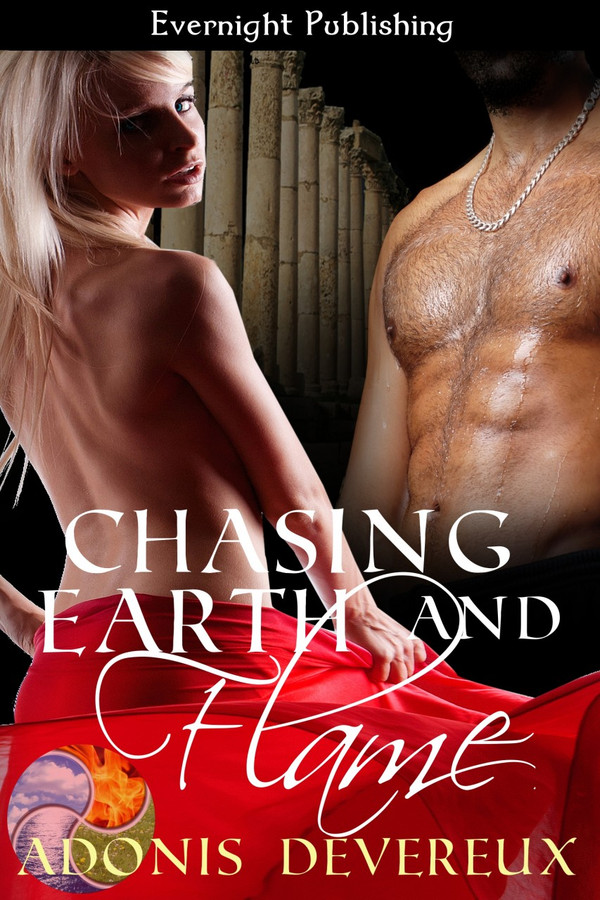 Nevia is the daughter of the First House of Nirrion, but though she is both a powerful elemental mage and a cunning political mind, she is her father's property. She is promised to Melenius, the only other noble elementalist in the city, but she is not certain she approves of her father's choice. She has a stronger will than anyone has ever given her credit for, and she is determined to find and keep the love of the only man who can conquer her heart of earth and flame.

Melenius caught Nevia by the arm and pulled her into a curtained alcove.

“We will be seen,” Nevia whispered.

Melenius shook his head. Cena was due to begin in a few minutes, so he had to work quickly.

It was Nevia’s turn to shake her head.

“Yes,” Melenius said. He pulled out a vial of scented oil from his small shoulder bag. Nevia’s frosty eyes widened, and he smiled in his airs at her coyness. He poured the oil over the plug, then rubbed it around the head and down its length. “Turn around.”

Nevia did so, but she kept her eyes on her husband. Melenius had never seen anything sexier than his beautiful wife looking over her shoulder with fear and anticipation trembling in her elements as he hitched up her dress. Her fine, white ass was just what he wanted, and his cock hardened. He considered taking her right there, but the sound of music coming from the atrium made him think better of it. The entertainment had arrived. Dinner was imminent, and they would be missed if they were not punctual.

Melenius dabbed a bit of oil on the rosebud of Nevia’s anus and rubbed it around with his thumb. Nevia moaned.

“Quiet!” Melenius’s tone was half serious, half mirthful.

He pressed the tip of the lubricated plug against her ass and slowly applied pressure. He did not at once break her wall, and he was surprised at her body’s unwillingness to allow entry. With a stronger but still gentle push, he felt the pop as the plug slipped into her back passage.

Nevia’s knees buckled, but she did not collapse. The temperature in the alcove plummeted, and though Melenius knew her fires were stoked, she fixed him with an icy glare.

Nevia stood and let her skirts fall back into place. “You dare toy with the ass of an Akara?” She raised her hand to slap Melenius, but he caught her by the wrist.

Melenius lightly bit that wrist as he tweaked her nipple with his other hand. “Now, go be a good girl, and eat your supper.” He opened the curtain and slapped her ass on the way out.

Nevia continued to murder him with her eyes, but her elements betrayed her increasing desire. He sensed her laughter on his winds.

Cena was an elaborate affair, much more so than Melenius would have expected for just a one-night stay in a provincial town. As exotic, half-naked slaves from far-away lands juggled fire sticks before them all, Melenius turned to Judal the Younger.

“I wonder, why all this?” he asked. He popped a fresh, green olive in his mouth.

Nevius, reclined on one elbow, sipped his mulled wine and answered without taking his eyes from the entertainment. “We are returning from a great victory. Though Belamal presses forward, there will be glory for us upon our return to Nirrion. Why not celebrate a little? This is my father’s villa, after all.”

“Enjoy yourself, Firin,” Nevius said. “You and my sister are saviors of the republic.” Nevia’s couch was situated close to his so that their heads would be near each other for conversation. He leaned over and kissed her brow.

Melenius, on the other side of the low table laden with rich food, watched this sibling exchange, knowing that her ass was plugged, that her cunt was probably wet as spring rains.

Nevia betrayed nothing; she could not to her brother, anyway, but neither did her elements. She was cool, collected, and calm. Melenius nodded in her direction, raised his cup in a silent toast to her, and drank its contents. A slave refilled his cup at once. Nevia, playing at human expressions, narrowed her eyes at him. Melenius almost choked on his next drink.

Radish salads and oysters gave way to hot-boiled goose and songbirds with asparagus. Between the appetizers and the main course, clowns had come to re-enact the battle of Vieta. The actor who pantomimed Belamal wore comical armor, and his gold-painted face twisted in all manner of melodramatic expressions.

Nevius ripped hot, juicy meat from the bone with his teeth. “Belamal Triumphant, to be sure.” His mouth was half-full of goose. “Too bad Garalach isn’t here. He could’ve made your job in Vieta easier.”

Melenius felt the instant drop in temperature, and the braziers that burned around them dimmed.

“More wood.” Nevius snapped his fingers at the nearest slave.

Nevia did not look at Melenius. Her eyes were fixed on the small plate she held on her lap. The name of Garalach clearly upset her, and Melenius wanted to go to her, to hold her and remind her of how he had been deceived. He had never stopped loving or wanting Nevia. It had not been his intention to betray her.

But Nevia would not return his glance.

The sun disappeared from the sky, and a cold wind blew through the peristyle and into the atrium.

This is the third book I have read by Adonis Devereux and I am complete fan. Each book that I read by this author the more I get drawn in and lost in the author&#039;s mythical world where rules, duty, status in society stands in the way of true love amidst the backdrop of greed, deception, betrayal and power struggles. The author continues to provide readers a lush world reminiscent of ancient Rome and the Lord of the Rings. First I have to say I loved Melenius and Nevia. Both of these characters were so richly described that I was able to picture them easily walking through the halls or capturing each others&#039; eyes across a room. Melenius is a Senator of the Faror class, but he is also a Lorin, a powerful being who is gifted to control the elements in particular Air and Water. Although he was born and raised in the city of Nirrion and a Lorin, which makes him above humans, he is seen as an outsider. Melenius is tall, tanned, muscular, with shoulder length black hair and black eyes with a beard ( I picture Oded Fehr with a goatee like in The Mummy or Jason Momoa as Khal Drago), has a nice hairy chest and is described throughout the book as dominant and eludes confidence, masculinity and virility. With all these characteristics he also demonstrates tenderness, passion, loyalty and perseverance especially for the woman he loves, Nevia. Nevia is the only daughter of the High Priest of Nirrion and belongs of the highest of the noble families among the Skenje people. Just like Melenius, she is also a Lorin, but of the Fire and Earth element which complements Melenius. Nevia is petite with pale skin, long white-blonde hair and pale frosty eyes, but what makes her stand out is that she is strong, fierce, intelligent, powerful, loyal and woman who will stand her ground for the man she loves and allows to dominant her. Melenius and Nevia have been arranged to be married since Nevis&#039; childhood and now at 18 she is swept away by her father in a very private marriage with no fanfare, no parade, no witnesses, and no celebration fit for a noblewoman. Regardless of the highly unusual wedding, Melenius and Nevia are drawn to each other not only on an elemental level, but something deeper. Melenius stated that he has always loved her from afar and Nevia is drawn to Melenius&#039; masculinity and his dominance over her. Unfortunately their bliss is short lived as deception, betrayal and political intrigue tries to tear them apart. Now I have to say this book was incredibly HOT (fanning self). The author did a fabulous job of providing extensive detail of Melenius&#039; domination of Nevia during their lovemaking. Warning this book has some very hot bondage, anal sex, use of sex toys and M/M action (very intense). Readers will definitely need many cold showers because Melenius not only dominants Nevia but also the reader with his sensuality. I did not want the story to end and hope that we will see more of Melenius and Nevia in future books.