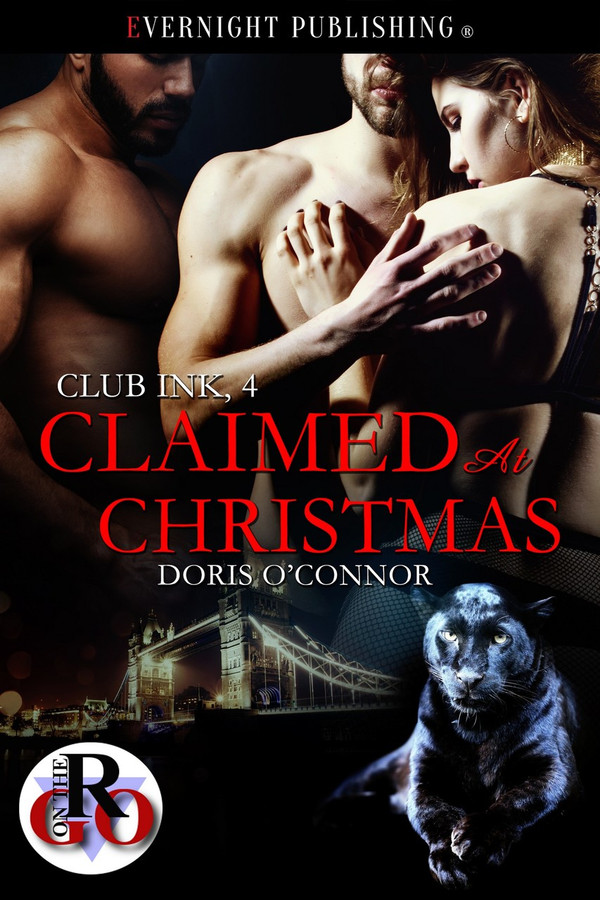 Leisha here—AKA crazy cat lady—resigned to live out my dotage with said felines. Okay, dotage might be pushing it a little, but, you know, sliding down the wrong side of forty is not the fun it’s cracked up to be.

Until I’m drafted in to help out at Santa’s grotto, and then, well, crazy doesn’t come close. This new Santa is decidedly odd. Who ever heard of the man in the red suit not granting wishes? Still, when in Rome and all that…

Not in my wildest dreams did I ever think my wish for two Doms would be granted. However, when my two rescue cats magically transform into drop-dead gorgeous hunks come Christmas morning, we’re all in for one hell of a ride.

But the problem with magic is … can it last?

"Lie still, sweet Leisha. You've earned yourself enough punishment as it is."

Good God. It’s the voice from my dream. A voice so full of authority and leashed passion, my breath hitches and excitement spreads through my veins like wildfire.

"Hmm, let's see." The stranger, whose eyes hold me captive with their familiar arrogance, smiles and presses his erection into my mound. "Does this feel as though it ought to be castrated? And I won't even mention the fucking tags."

His annoyed growl vibrates through me, until it settles in my swelling clit, and I gasp as I take my first proper look at him.

Yet, there, right above me is the unmistakable evidence. My captor is missing his right arm—just like Ben.

"Ease up, Aran, you're scaring our woman. We need to explain this. Then we can paddle that sweet ass of hers and give her the fucking she deserves."

"Paddle … deserve?" I sound like a dimwitted parrot, but when one is staring at a drop dead gorgeous human version of one's cat—and this one has a scar just like Bill—surely a woman is allowed to sound like a feathered idiot. Or the Queen… Since when do I sound as though I’ve swallowed a plum?

"You're my cats. You're Bill and Ben." That statement comes out as a high-pitched squeak, and both men growl.

Oh, my goodness, those animalistic sounds… I just love a man who growls, don’t you?

"Another ten swats to the tally for those ridiculous names, and we're not just cats." Ben, Aran, or whoever the hell he is—right now I can’t bring myself to care about the semantics of the situation—smiles. That action shows off a set of razor-sharp teeth, and I forget to breathe altogether when his eyes bleed to glowing amber. He leaps off me with all the speed and agility of a large predator, and I can only watch in stunned fascination, as the men nod to each other. The air shimmers around them, and in the blink of an eye, my bedroom is filled by two huge, beautiful black panthers. They nudge each other playfully, and before I have the chance to process of any of this, the air shimmers and they’re back in their human, and very aroused, forms.

Two impressive cocks bob up and down in front of me, and I can’t keep my eyes off that poetry in motion. Heat rises in my cheeks at my thoughts, and the men laugh. When I finally manage to wrench my eyes upwards, my insides clench in need at the quiet way both men are studying me. A trickle of my essence seeps out of my wet core, and both men pull in sharp breaths. Aran takes a step toward me, but his brother stops him.

"Let me go, Caid. She wants this as much as we do, don't you, sweet Leisha? Are you not wondering how our cocks would feel buried deep inside your cunt and ass, right now? Have you not fantasized about this many a night when you kicked the covers off to use your toys?" He smirks at my far too telling rough inhale and fists his cock slowly.

Unbidden, my gaze follows the movements of his fist. The first drop of pre-cum aids the glide of his hand, and I lick my lips in anticipation of his taste. It’s been way too long since I last tasted cock, let alone one as magnificent as this one.

"Aran." Caid's sharp command forces a snarl from Aran’s wide chest. He flicks his unruly mop of hair out of his face with an impatient toss of his head and the bed dips under his weight when he sits down.

"Forgive my brother, Leisha. It's been a while since we were able to shift in and out of our true form. This," he waves his hand toward his own thick erection, "is a side effect of the shift. Not that I don't have every intention of fucking you until you can't walk straight, but first things first. Acting rashly is what got us into this predicament in the first place."

My head starts to pound again, and not due to any leftover hangover from my wine-induced stupor the night before.

I hate the telltale wobble in my voice. Just my damn luck this is. Two gorgeous, naked men are in my room, and they don’t even want me for me. So much for Santa granting my wish. Sick bastard!

Aran's annoyed growl shakes the bed, and I squirm under the disapproving look Caid pins on me. My nipples bead into hard nubs, my stomach lurches, and every submissive bone in my body screams, God, yes!

"That will be another ten. How much is the tally now, Aran?"

"Thirty, brother. It's a shame we can't take her to the club, but I'm sure we can improvise. That hairbrush she's been torturing us with should do the trick, nicely." Aran chuckles, and I swear every hair on my body stands to attention at that dangerously sexy laugh.

"I … you wouldn't dare." My protest is far too breathy, and sure enough both men just smirk. Excitement pools low in my belly at the determined expression on their faces, and I clamp my thighs together to relieve the throbbing in my clit.

Aran grabs my foot and shakes his head. His suddenly clawed fingers dig in just enough to hurt, and I can feel my eyes widen in shock, or maybe that’s just pure unadulterated lust. I can’t believe how turned on I am already, and they’ve barely touched me.

"Stop fidgeting. From now on your orgasms belong to us. There will be no getting yourself off unless we give you permission."

Leisha is an older woman who just wants a man, preferably a dom to love and cherish. So far the only males she has in her life are her cats, Bill and Ben. Maybe that is all she will ever need. Santa has made a promise; so what if it was the mall Santa – or was it? When Leisha wakes after a night of too much drinking and crazy dreams about two men, Bill and Ben are the only ones to greet her. Leisha does not realize she has earned herself some punishment from the two who call her theirs. Will the three be able to break curse and make Leisha’s wish come true, or will it all be over come the morning? Claimed at Christmas is a wonderful read with enough spark to light a fire. The story line is unique and offered an amazing journey for the reader. I love the twists along the way which left me amazed at the turns. I highly recommend Claimed at Christmas and the writing of Ms. O’Connor.

What a great short story panther shifters ,a lonely woman and a sneaky Santa an explosive little love story just as you would expect from Doris needless to say it was just wonderful

This may be a short story but wow, it&#039;s a hot one!!! I love older heroines and Leisha is awesome. This is also the 4th book in the Club Ink series! Shifters, yes!! I love them. I promise you will love this story!!! There is a LOT packed into this story but now it makes me want to know more about...... Santa!!! ;)

This may be a short story but wow, it&#039;s a hot one!!! I love older heroines and Leisha is awesome. This is also the 4th book in the Club Ink series! Shifters, yes!! I love them. I promise you will love this story!!! There is a LOT packed into this story but now it makes me want to know more about...... Santa!!! ;)

Christmas With His Best Friend by Doris O'Connor