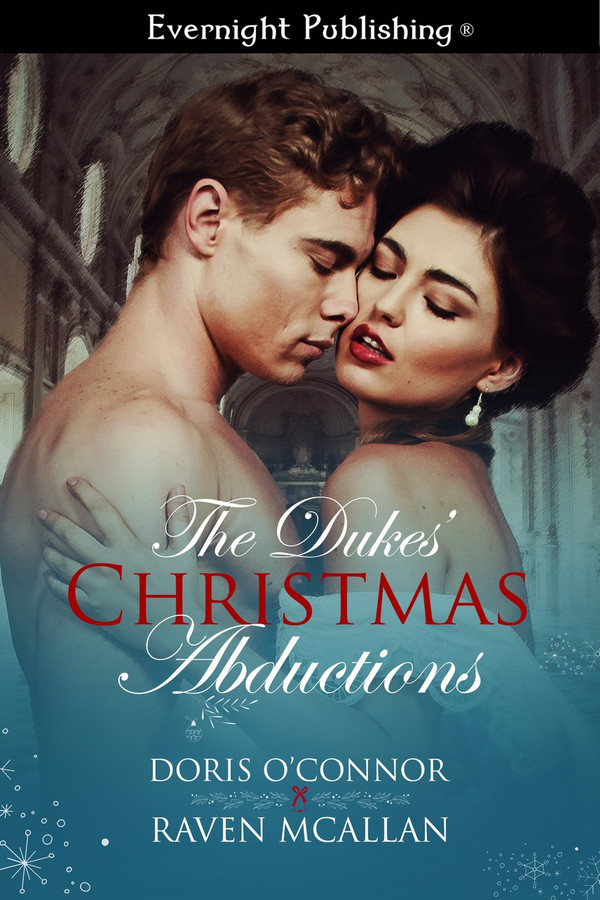 When Clara lands the job as curator of Faversham House it’s a dream come true. Especially when her favorite Regency Erotica writer Vicky Hopewell shadows her in the run up to the annual estate ball—a tradition left over from Regency times.

The costume ball is always the highlight of the year, but neither woman expects to be confronted by two drop dead gorgeous Dukes.

Daniel Danvers, the Duke of Hockwell thinks Clara is one of the servants invited to the estate ball.

Kit Capel, the Duke of Aulban cannot understand why his wife Victoria acts as though she doesn’t know him.

As both couples slowly come to terms with the reality of their situations, can they find happiness? Is it as simple as following your heart?

Daniel paused mid swatting the delectable arse in front of him to rub, what must be a considerable ache by now, away. His quarry had stopped screaming for this Vicky, at last, and unless his senses were completely off, she was starting to enjoy his attention. Certainly her breaths were coming in short gasps, and instead of struggling, she was raising her bottom into every carefully placed swat of his hand.

The evening was definitely looking up. As was his cock, which was in danger of splitting his evening breeches.

There was one way to find out for sure. Daniel slipped his fingers under the hideous undergarments, and smirked at the all over body shiver his girl gave. Satisfied with not only her reaction but also by the wet, hair-free cunt he found, he let his digits linger.

Her breathless moan spurred him on, and he grinned when he found her hidden pearl. She shivered again when he circled the tight nub, and Daniel set up lazy circles, designed to drive any woman wild. This chit proved no exception. The air grew heavy with the musk of aroused woman, and Daniel inhaled deeply, before he stopped the movement.

A strangled groan escaped his girl, and he tapped her arse again, when she tried to rub her cunt on his fingers.

“Oh, no, you don’t. I want the truth, starting with your name, and maybe then I’ll let you find release. Only on my say so, though, are we clear here, girl?”

Her arse cheeks wobbled most satisfactorily, when he yanked that odd fabric down to her knees, and delivered a few more swats to her delectable arse. The woman had a derriere made for fucking, hips to grab onto while he sunk his cock into her body and claimed what was his. That thought made his head come up. His? He had no business having proprietary thoughts toward a servant like that.

“Fuck, we most certainly will, but not without you telling me who you are, so…” He delivered another open handed swat across both of her arse cheeks this time, and her answering deep throated moan made him go so hard it was a wonder he hadn’t spilled in his breeches yet.

Daniel slid his fingers through her sodden slit, and flicked her nub once, causing her to give another one of those cock hardening moans.

“Very nice, but the correct address would be my lord, chit, would it not?”

A strangled groan was his response this time, and when he withdrew his fingers again, she slumped.

The girl, Clara, he mentally amended, had fire, that was for sure, if the intonation she gave his title was anything to go by. A certain amount of boldness was something Daniel certainly appreciated in his bed partners. If Clara was a lady’s maid, she was wasted in that position. As his mistress, however…  His mood improved dramatically as that thought took hold.

It was Christmas, time to be charitable and all that went with such bounty, and what could be better than elevating this lovely creature from her status of mere servant to his mistress.

Mind thus made up, it was time to taste her nectar and to see if what he was suspecting would be true. That Clara and he would mesh perfectly in the bedroom, and he could let his darker desires shine through.

He indulged himself by sliding several digits through her wet cunt, lubricating them with her juices, before he slipped one finger into her tight channel, and brought his thumb to press against the puckered hole, guarding that entrance.

Clara stiffened slightly, but she didn’t voice any protest, and when he started to thrust the finger in her cunt slowly in and out of her, she gasped. Her hips rose in involuntary jerks, which told him how close she already was to exploding under his ministrations. Her untutored responses made him want to hurry this along, but Daniel was never an inconsiderate lover. He would give her several releases before he claimed his own.

“Good girl, and who do you work for?”

Clara moaned and writhed against him, her internal muscles fluttering around his fingers in rippling moves, which signaled her impending orgasm as clearly as the rosy flush spreading across her skin. So beautifully responsive. She jerked when he tapped her nub, and then withdrew his hand.

“Faversham Estate. Oh god, please, My Lord … I.” The rest of her pretty little plea was lost in a screech as he swung her off his lap and onto his bed.  Her breasts bounced most satisfactorily, and her lovely almond shaped green eyes widened further when he crawled onto the bed with her, and straddled her midriff. Daniel grasped her arms and brought them high above her head. The action made her breasts rise up in silent offering, and Daniel smirked.

“Hmm, that would mean you work for me. How delightful. Whatever position you hold here, I much prefer you in this one, unable to move and at my mercy. I’m going to tie your wrists together and tether you to one of the posts, sweet Clara. Is that acceptable to you?”

&quot;Her reflection in the mirror gave her pause for thought. She looked happy, truly happy and she was honest with herself enough to admit that it was entirely due to her time traveling duke.&quot; A highly entertaining time-travel novel, THE DUKES&#039; CHRISTMAS ABDUCTIONS blends aspects of traditional Regency romance with steamy sex and sharp-witted, contemporary heroines to create a very unusual holiday love story. The novel opens amid the pomp and bustle of the Faversham House Christmas Ball - an elegant, Regency-themed gathering, complete with lavish costumes and a mysterious butler. As a powerful storm rages outside, something magical is taking place amid the winding corridors of the stately mansion and it will sweep Clara Ellington and Victoria Hopewell into the arms of the men they have been destined to love. Clara, the house curator, has secured an invitation for the exclusive holiday soiree for her beloved friend and romance author Vicky Hopewell. With a voluptuous body and a brash sense of humor, Clara poses a sharp contrast to her slender and impeccably dignified friend. However, they are soon to discover that they are bound by a legacy and a set of passions that connect them in ways they had never imagined. When Vicky asks Faversham&#039;s butler to show her and Clara to the private rooms of the mansion, typically forbidden to those outside of the family, the eagerness with which he complies fills Clara with a sense of foreboding. As the young women explore the collection of family portraits amid the home&#039;s private gallery, Clara&#039;s anxieties grow stronger, as does the raging storm beyond the window. As their eyes settle on the paintings of two handsome Dukes, cousins who once resided in Faversham House, the room is engulfed in a flash of lightening. Disoriented and separated from her friend, Clara collapses in fear, only to land the arms of Daniel Danvers, the 19th Century Duke of Hockwell. Mistaking her for a beautiful servant who has been invited to his family&#039;s holiday ball, he is enticed by her womanly body and headstrong personality. Determined to understand the truth of her appearance in his home, he interrogates her in a manner that reveals his unconventional sexual desires and awakens needs within Clara that she never knew existed. Though she is enticed by the handsome Duke who has taken her under his control, she fears for her friend Vicky, who appears to have undergone a journey of her own. Awakened by the sound of her friend&#039;s voice echoing in her thoughts, Vicky finds herself tied to the bed of Lord Capel, Duke of Hopewell. Adamant that she is his wife Lady Victoria, and that they married one year ago, in December of 1814, he is distraught by her strange new vernacular and her inability to recall their life together. Though she is desperate to convince him that she is not his wife and that she will not submit to his expectations, Vicky finds the Duke of Hopewell&#039;s presence increasingly familiar as feelings of longing re-awaken within her. Though one woman will stay in the past and the other will bring her lover into the present, the bond between Clara and Victoria will remain intact through the discovery of a family memoir which will allow one woman to read of her friend&#039;s happily-ever-after while coming to realize her own. While the premise of THE DUKES&#039; CHRISTMAS ABDUCTIONS requires a significant suspension of disbelief, it is thoughtfully written and very well-paced. The stories of Clara and Victoria begin on the same time line, however the authors interweave their adventures following their time travel experience in a manner that keeps the reader guessing while slowly building the sexual tension between the women and their handsome captors. Though the mechanism for the characters&#039; time traveling ability is never truly explained, and that may disappoint some readers, this is ultimately a novel about destiny and sweeping romance and those themes are in no way undermined by shrouding the heroines&#039; time travel experience in secrecy. Farcical and funny, I would highly recommend this romance to any reader seeking a sexy, feel-good story about modern women finding timeless love amid the most magical of circumstances. - See more at: http://erotic.theromancereviews.com/viewbooksreview.php?bookid=20228#sthash.AXUcEhHA.dpuf

This is one of those books that is hard to review without giving away the story or plot. It’s nearly impossible to tell that the book is written by two separate authors because the story flows so well. And it’s an amazing little story. Full of love and romance and steamy sex. I really enjoyed this book. It has a little of everything. And being this is a book by Raven and Doris you can’t go wrong.

I loved this novella!!! You would never know it was co-written. The voice remains true throughout the entire story, and what a story it was. Rather than 2 main characters, there are 4, but their arcs / plot arc weaved perfectly within the novella. A little magic, a little time travel - with a twist, The Dukes&#039; Christmas Abductions is satisfying, enjoyable, and body warming. ;) A must read!

I&#039;m not really into Regency romance but with Raven McAllan and Doris O&#039;Connor both writing this one, I just HAD to get it! I LOVED it! Time travel is always a fun story and this had me laughing and just plain enjoying it. The sex is smoking hot, as it always is with Raven and Doris, and the ending just wrapped it all up. At least for these 4 characters!!! I hope these two lovely ladies do some more collaborating in the future!!!

Claimed at Christmas by Doris O'Connor

The Tattoo Artist's Mate by Doris O'Connor and Raven McAllan