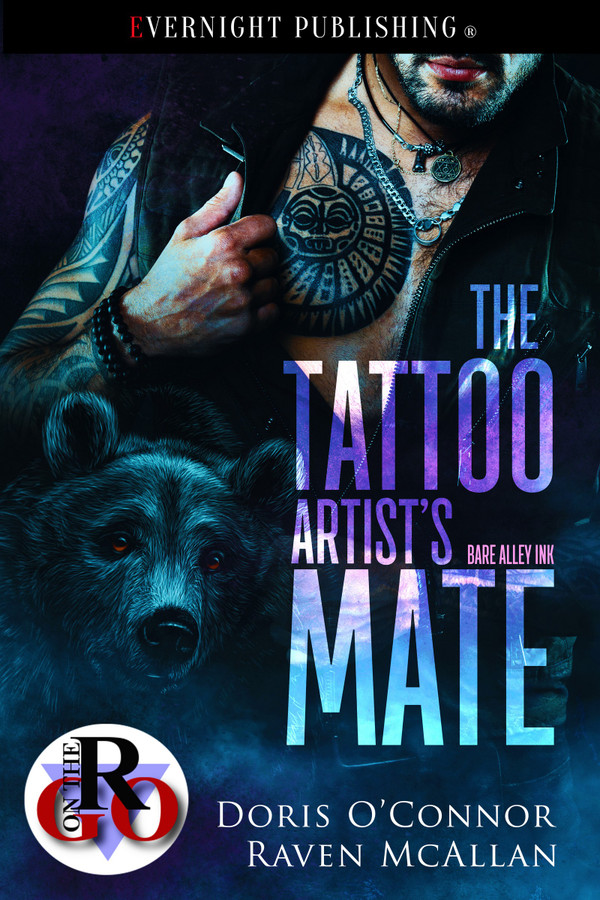 When Isla Campbell leaves her so-called Dom, she is determined never to sub again. All she wants is her tattoo removed and to live a quiet life with no dominant, or domineering men, in it.

Until she meets Gaspar MacDonald, tattoo artist and, unbeknownst to her, a bear shifter.

Isla calls to Gaspar in the most basic of ways—he knows she is his mate.

Now all he has to do is persuade Isla of that fact. Oh, and explain he’s a Dom, and a shifter, and that subbing for your Dom is not what she thought it was, but much better.

Will Isla ever trust him enough to discover if they have what would be the perfect match?

Come on in. What can I do for you today?” Gaspar did his best to keep the possessive note out of his voice. He wasn’t sure he managed it, but what the fuck? It couldn’t be helped, and it was certain it would just get stronger as time went on. She might as well get used to it now rather than later.

Baby steps. Fuck it, I’ll just try to do steps, and not tell her everything at once. It wasn’t going to be easy to explain himself to an unsuspecting human. Baby steps might be best. If only he knew what the hell they were. Why in all the world had a human been sent for him?

“Take your time.” He handed her a bottle of water. She took it, unscrewed the cap, and took a long, slow swig before she recapped the bottle.

“I, well that is, I’m not sure you can, it’s just…” Heat rose in her cheeks under his silent scrutiny, and the wave of protectiveness that engulfed Gaspar made his chest feel tight. When had he ever experienced such an emotion before?

Like, never. It was unnerving to say the least.

He crossed the distance between them in a few long strides, and she jumped when he placed his large hand over hers to gently pry away the death grip she still had on the door.

“Come in and sit down.” He did his best to keep his animal under control and not let it bleed into his body, or his voice. Soft and unthreatening was needed, not macho and bear. “Whatever it is, it’s got something to do with a tattoo, I bet, and I can most definitely help with that.” He smiled down on her, and some of her underlying tension went out of her small frame.

So small, and delicate, she fit right under his armpit. No doubt she didn’t see herself like that, but for him, she was perfect. To have and to hold.

Down, boy, don’t frighten her.

“Is this where you’re saying ‘trust me, I’m a tattoo artist’?” Her voice, while still wobbly, held a certain amount of snark, and Gaspar grinned.

“That what the one said who gave you whatever you want changed?” he countered, and she narrowed her eyes, put her hand on her hips and stepped into the shop at last. The door banged shut, and she jumped a little in surprise.

“How do you know that’s what happened? I might just fancy getting my first one.” She raised her gaze to his briefly and promptly dropped it to his collarbone when he raised an eyebrow in silent query.

“Then I would stand corrected, but that’s not the case this time, is it?” he said gently. There was no point in anything confrontational. “And how I know? Let’s just say, I’ve been in the business a long time, and I’m very good at reading people. So, where is it? Why do you want it removed? What’s your name, and how do you take your coffee?”

He winked at her sharp inhale, and she relaxed further and sat down on the plush settee he kept for waiting customers. A sod to remember not to let any shifter near when aroused—he’d lost four already to sharp claws and teeth—but perfect for ambience. His little human darted a glance toward the book of sketches and photos of past tattoos and then looked up at him.

“On my ankle. ‘Cause it’s the dumb name of my ex. Isla Campbell, and white coffee, no sugar, please.”

“Sweet enough already?” he asked with a smirk, and she rolled her eyes.

“How original and nope, I’m told I’m rather tart, but sugar goes straight to my hips if I as much as look at it.”

Gaspar led his gaze linger on said parts of her, and her breathing sped up under his silent perusal, which pleased the possessive animal in him no end. Already her scent was beginning to take on a personal note, one which any other shifter would understand to mean that she was spoken for. That she had a mate whether she knew it or not.

In this case probably not.

“And damn fine hips they are, too, if you ask me.” He smiled at her as he handed her a cup of the steaming brew and then sat next to her. The sofa dipped under his considerable bulk, which, as he well knew, meant she slid toward him with a little squeak. Their thighs touched, and even through the layers of denim separating them, the connection between them arched, shimmering in almost visible tremors. Gaspar wanted nothing more than to wrap his arms around her and to tell her it was okay. That she was safe. That no one would ever hurt her again, but he had to tread easy. To spook her away now, to let on how much he knew about her just from that accidental touch, how much his bear was itching to hunt down the fucker whose name she wore on her ankle, was not his intention.

The beast would get his revenge in due course. For now, he sat back, smiled and nodded.

“Okay, so tell me the story, and we’ll come up with a plan.”

Five minutes later her litany of her tattoo finished. “So I walked, and now need to get rid of that last reminder of my stupidity.”

“We’re all stupid at times,” Gaspar said in his deep, growly voice. “But I know just the thing to get rid of yours. How do you fancy a bear and a honeypot instead?”

A short by amazing read. I absolutely adored it. I didn&#039;t want the story to end. I&#039;m hoping there is more in the series.

This book was very bittersweet for me to read. I&#039;m a HUGE fan of Doris O&#039;Connor and this was the book she had been working on with Raven McAllan when she passed this past January. As I read it, I could totally see Doris in the parts she wrote. I&#039;ll admit, I cried a little bit simply because this is the last story her readers will ever get from her. The story is short, sweet and oh so hot! Isla left an abusive master, determined to make it on her own. She decides to get the tattoo erased or redone that said former master made her get and decides that Bare Alley Ink is where she&#039;s going. Gaspar, a bear shifter, knows she is his mate as soon as she walks in the door. The story is short but packed full of emotions as Gaspar and Isla get to know each other. I totally fell for Gaspar and I loved that Isla wasn&#039;t a wimpy woman but feisty. I don&#039;t know if this was going to be a new series for these wonderful authors but I would love to see Raven McAllan carry on with this, providing the muses speak to her! LOL Loved the characters, loved the book and I HIGHLY recommend this to anyone who is a fan of Ms. O&#039;Connor or Ms. McAllan. It hits all the right notes!!

I consumed this delightful story! It was funny and sexy, and emotional, knowing it was the final collaboration between Raven and Doris. Wonderful work!

Take one annoying ex-boyfriend with a lasting reminder on your skin and…get rid of him. Poof! Instead find one sassy sub with a penchant for sweets, one growly bear-shifter tattooist, mix in a delicious afternoon learning what counts most in matters of the heart (and, er, other body parts), and you have the recipe for a tasty mid-day treat that you’ll want to read again and again. “The Tattoo Artist’s Mate” is an On the Go Romance by Doris O’Connor and Raven McAllan and I admit to feeling a bit teary reading it knowing that it was the last story Ms. O’Connor was working on before she passed away. Kudos to Ms. McAllan for finishing it up. It’s lovely.