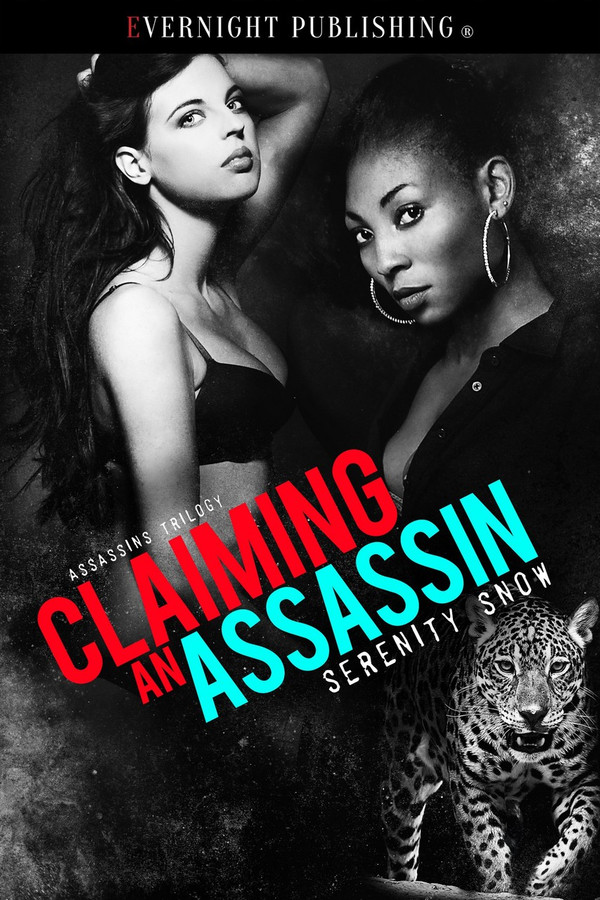 Blade knows she has it bad because she can’t stay away from Kya. Still, she can’t risk allowing Kya to get too close—let alone trust her with her heart.

So when Kya makes it clear she intends to have her, Blade lets Kya know that her reasons for being an assassin aren’t noble. She’s a barely leashed killer who will murder for Kya, die for her, and love her without bounds. But the darkness will consume Kya before Blade lets her walk away—alive.

Now, Kya has a choice to make. She can leave, or give in to the passion burning hot between them and claim her mate. Whatever her decision, Kya better be sure because there will be no second chances.

Blade feigned a punch and when Nikita went to block, Blade punched her in the stomach and grabbed Nikita’s wrist and turned her around driving her into the wall next to the stand of trays.

“Touch her again, and I will kill you, Nikita.”

“Break that shit up before you two ruin the food,” one of the cooks called from behind the long counter at the buffet line.

Blade released Nikita and jerked her knife from its holster and threw it at her. The woman squealed and got out of the way.

“You’re such a bully, Blade,” Kya said softly and moved past her. “Can I have some more raspberry tea?”

“I’ll put a pot of fresh out in a second,” another cook said.

“I just want it to go.” Kya moved toward Nikita and Blade grabbed the back of Kya’s neck.

“Don’t,” she said coldly in her ear. She knew Nikita could be good for Kya. She could give her the love Kya craved, but Blade would be damned if she could allow another woman to love Kya.

“I know, I can’t though,” Kya said. “But I’m free tonight. We can get dinner before you grab a nap.”

Blade’s fingers tightened. “You’ll be busy with training.” Her voice was dark, and animalistic and Kya was a little worried Blade might actually hurt someone.

Nikita moved around them and leveled a look at Blade. “Devin needs to take you off active duty until you get your shit together.”

“Fortunately for you she’s out of town, so you can’t go whining to her,” Blade said and pulled Kya toward her.

“Then maybe I’ll just put a knife in your gut and give your girl a reason to seek comfort in my arms.”

Blade’s fingers were gone and Kya jerked around sensing the rise in the aggression in the room.

“No.” She put her hands on Blade’s chest. Blade gripped her shoulders. “Blade, look at me.” Kya gripped Blade’s jaw.

Blade met her gaze, the gray-green of the cat eyes hard.

“We have work to do,” Kya said keeping her tone nonthreatening. “Ace wants us in the office.”

Kya’s voice was imploring, but the tang of fear she picked up from her made the cat ashamed at being the cause of trepidation in the little woman before her.

Combined with the sweetness of her heat, Kya’s touch calmed her animal, but the woman wanted to tear into Nikita for having been with Kya.

Damn it. Kya had her so off balance it was making her head spin.

“Coffee to go,” Blade snarled and then raked her fingers through her hair before turning away. She glanced at Nikita who gave her a cold stare. “I meant what I said, Nikita.”

“I know you did, but the choice is hers not yours.” She gave Kya a wink and Kya smiled.

Nikita gave her a nod and moved on.

Kya looked up at her and those clear moss green eyes searched her face. “Then give me a reason.”

“I’ll cut her tongue out, so she can’t use it on you, and don’t think I won’t, Ky,” she murmured. “Talk to her, but don’t flirt with her around me, and don’t go sneaking off to fuck her.” She turned as the smell of coffee wafted over them.

Blade took the to-go cups held out to her and handed the tea to Kya who was still staring at her, horror in her eyes.

Maybe she’d finally managed to terrify her enough to force Kya to stay away from her.

Her cat growled, enraged with her, but she ignored it as she headed to an island pushed against the wall. It was laid out with all the condiments they needed for drink and food.

“I’m finally getting it,” Kya said after joining her. “You’re terrified of me, but you don’t want anyone else to have me either. This is where you make a choice, Blade. Fling—because I accept you can’t give me more.”

“Or leave me the hell alone and that includes not growling at women who might actually want to spend time with me, not cutting anyone, and not interfering in my life.”

“I—” Kya put a finger to her lips silencing her.

“You want those rights, even temporarily, claim them.” Kya withdrew her finger and added lemon and sugar to her tea.

Blade frowned at her, but didn’t speak. It couldn’t work. She wasn’t tame even though she gave a damn good impression of it most times. She would kill anyone who got between her and her woman.

The horror she’d lived through as a child taught her to hold little dear or hang on to what you treasured with a white-knuckled grip, even if that meant putting it in the ground to keep it from leaving you.

Blade and Kya are so sexual it’s not even funny but I guess it’s to be expected since they are cats. The sex scenes were hot and I found it nice that they were able to be around each other during a case. That’s not to say that Blade didn&#039;t try to fight it and boy what a battle it was. It was made even more interesting by the fact that Kya was in heat. Blade is standoffish and really doesn&#039;t like to let people get close but she’s very protective and looks after the people she deems worthy in her life. She has a very dark past that involves her family and it hurt so much to see her fighting her feelings for Kya. I just wanted to hug Blade and tell her it was okay to have someone love and care for her. I highly recommend this read for those who love shifters, adventures, claws and a good old fashioned fist fight. If you liked reading &quot;Claiming the Assassin&quot; the you might also like these: Trouble Clef b: Kara Lowndes Losing it Two at a Time by: Michelle Graham In Cold Blood by: Naomi Clark

I really enjoyed all three books so far. Blade was really intense and scary, I feel like Kya is going to have to kill her one day lol. But it was really sweet how she threatened Ace when she snapped at Kya. Blade and the ‘Russian slut’ scenes were very entertaining and funny. I hope Cattail gets her own book! She’s awesome!

You bet your butt it can I say anything is possible with the love of a good women. Our leading ladies are quite the pair one hard as ice the other one willing to do anything to melt the ice. Does she succeed well girls your going to have to read it to know because I&#039;m not telling. I&#039;m sorry to see the trilogy end there are so many good characters to explore maybe that talent writer will do a spin off. You want action it&#039;s here. You want steamy love it&#039;s here. You want betrayal and assassination it&#039;s here. Did I mention cat shifters what more could you asked for. Meow here Kitty Kitty Purrrrrr Enjoy I know I did. Thank you Ms. Snow I&#039;m in Awww of your beautiful mind

Burning for an Assassin by Serenity Snow