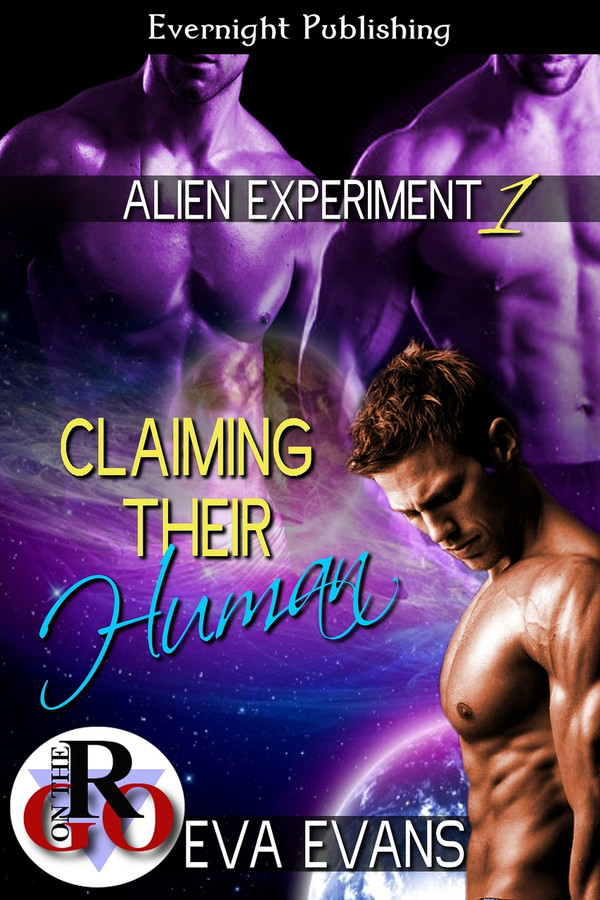 Caleb hates the fact his small fishing town has turned into a tourist trap. After an alleged alien sighting near the marina, everyone is trying to make money off the spectacle. Overnight vendors and obtrusive billboards replace the beautiful views of the ocean. It isn't until two muscular men drag him to their spacecraft that he second guesses his beliefs.

Zane and Kross have traveled across the galaxy to find their human mate. They've been searching for years, so when they find Caleb, they're beyond thrilled. One thing they didn't plan on was his reluctance to their abduction. But they won't leave Earth without their human.

Caleb soon realizes he has nothing of value left on Earth. His gorgeous alien captors promise him love, excitement, and the best sex he's ever had. Somewhere along the way to their planet, he decides their new menage relationship is actually a blessing in disguise.

Kross knew he had to ensure Caleb was indeed their mate before carting him across the galaxy. Dolph’s words kept ringing in his head, and he refused to bring more heartache to Zane if they’d made a mistake like others had. He was torn in two directions. When he’d come to Earth, he never imaged feeling desire for a human. If they found their mate, he assumed he would only tolerate the male. But as soon as he scented Caleb in the clearing, something inside him came alive. He knew. Even without the prophecy, tests, or experiments—he knew they’d found their human.

However, relying on emotion was not something he was accustomed to. He had to be sure, no matter how hard his cock grew or how hot his blood ran.

“Remove your clothing,” he repeated.

The human swallowed hard, his eyes wide with uncertainty. Normally Kross did not tolerate weakness in himself or others, but the little human stripped down his guards with just a look. His eyes were the bluest blue, a color no Mandor possessed. Although smaller, his body was toned and pleased all Kross’s senses. Caleb brought out his dormant protective instincts. He wanted to own him, keep him, and never let him go. Surely this was the natural attraction between mates the Oracle spoke of. He’d never felt this way for another male in his life.

What he needed was visual confirmation so they could continue on their journey home. He did not anticipate defiance from a weaker species. Caleb looked to Zane, a pleading note in his eyes.

“Do you not feel it, Kross?” asked Zane. “I don’t need an experiment to know he’s the one.”

He growled, knowing it was unwise to think with their hearts. He could hear the controlled excitement in Zane’s voice. This was what they’d been waiting for, but Kross had lived with enough heartache and loss to make him leery of any happiness.

“I will not claim him until the tests are conclusive.”

A bonding for Mandovians had to include two Mandors. Without Kross’s inclusion, Zane wouldn’t be able to take Caleb as a mate.

Zane pounded his fist against the metal table, the harsh sound echoing in the room. “I won’t be a part of it.” He stormed out of the room, leaving Kross alone with Caleb.

He smirked when he saw the panic flash in the human’s eyes. “It’s just you and me, little one.” Kross walked around the table, assessing his potential mate. “Take off your clothes.”

Zane wasn’t here to protect the human any longer. He had to comply, or Kross would make him. Caleb pulled off his sweater and set it beside him. He had broad shoulders, his body lean and muscled. Kross noticed a marking on his arm.

“It’s a tattoo. I got it in remembrance of my father.” Caleb ran his hand over the dark ink on his bicep.

Kross could scarcely remember his own fathers. He’d only been a boy when he was orphaned on Mythios. A life changing event making him the damaged male he was today. He felt a unique connection with Caleb, although he kept it under lock and key.

He could tell the human wanted to refuse, but he complied, slipping out of his pants until sitting completely naked on the cold metal table. Kross’s body reacted to the sight. His mating fangs pierced through his gumline for the first time. His balls pulled up tight as intense pleasure cascaded rained down on him.

Kross’s heart raced but he forced himself to maintain his composure during the experiments. He pressed Caleb down to his back. His body was a thing of beauty. He wanted to lick and touch every inch during his claiming. He hoped they had the right male because he could already feel himself bonding to the dirty blond.

His urge to touch him was overwhelming. Kross ran his hand down Caleb’s arm and continued down his strong thigh. The human’s cock twitched, piquing Kross’s curiosity. He ran the backs of his fingers along the trail of dark hair on Caleb’s ripped abs, and he didn’t stop when he reached his cock. He petted the silky skin until it began to firm up before he eyes. The skin pulled back revealing a beautiful pink erection. Kross’s mouth salivated. He’d been waiting a lifetime for sexual release with his mate. His thoughts shifted to his base desires.

I love the world building. It was really interesting. The editing was a little rough though. Caleb is an in the closet gay in a small fishing town. He’s abducted by two hot aliens that have been searching for their mate for two years. I liked all the characters but what I didn’t like was the instant love between the three of them. Caleb is abducted and the next second they’re all having sex. Don’t get me wrong it was hot but there was no emotion between them because they just met.

Claiming Their Men by Eva Evans

Claiming Their Lover by Eva Evans

Claiming His Human by Doris O'Connor