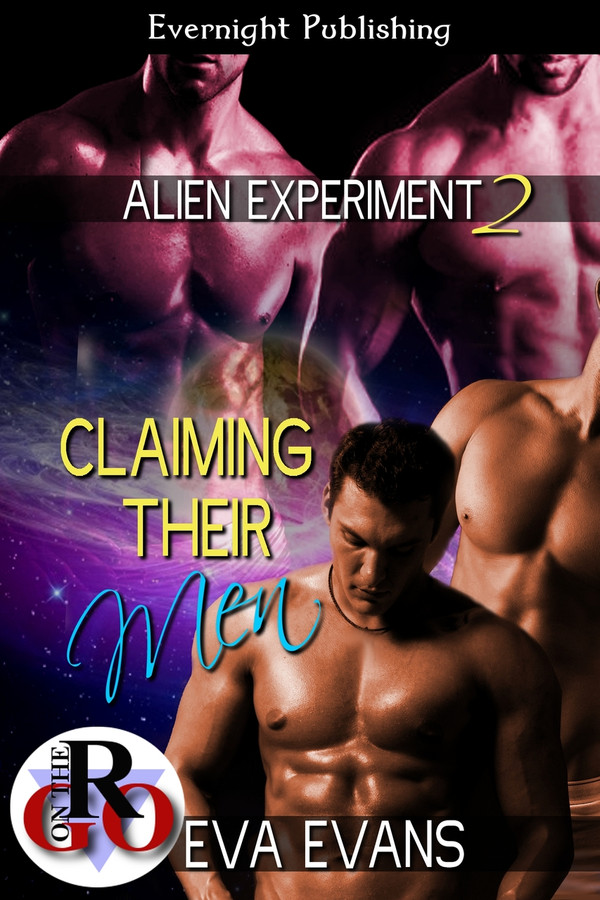 Grath and his twin brother, Zlade, have tackled many obstacles to obtain passage to Earth to find their mate. When they finally arrive, they don't find one man but identical twins. With the same tempting blood, they know they must keep both.

James and Adam are at the end of their rope when they discover an alien craft deep in the woods outside their camping ground. When they're abducted by two of the sexiest men they've ever seen, they aren't sure what to expect. The offer presented to them is tempting, especially when the alien men try to prove themselves through sexual favors. Should they be afraid or aroused?

Can the foursome learn to love each other or is a potential relationship destined for failure?

“We’re not like humans in every way,” he explained. “Our bodies are stronger and our senses more refined. For example, I can smell your heat as we speak.” He looked down below James’ belt and saw the evidence of his arousal pressed tightly against the material of his slacks. The human followed his gaze and swallowed hard without speaking.

“There’s no shame in wanting either of us,” said Grath. “If we’re correct, you’re both our fated mates. Any attraction is completely natural and expected.”

Zlade smirked and came close enough to Adam that less than a foot separated them. “Take off your pants.”

The human’s mouth fell agape, but surprisingly, the quieter human did as asked. He unbuttoned his pants and slid down the zipper. This time his brother didn’t protest on his behalf.

“Very good, Adam.” Zlade had dreamt of finding his mate for countless nights. Years of abstinence had made him an irritable Mandor. Now he had his personal fantasy ready and willing. It would be his ultimate pleasure to show these males what they’d be missing if they refused to return to Mythios.

He bent down and tugged Adam’s pants down past his erection. His cock was impressive for such a small species. It was hard, pointing up like a virile rod.

“It seems you’re just as aroused as your brother. Do you fantasize about having my cock in your ass, little human? Or do you crave my mouth sucking you?”

Zlade didn’t receive an answer. He could hear Adam’s heavy breathing, and he watched a drop of clear pre-cum slip from the tip of his dick. He petted the silky shaft, admiring the color and shape of the human penis. He wondered if James’ would be exactly the same, or had unique traits.

“You asked if we were looking for a male. Well, there are no females on Mythios. We have no desire or need for them.”  Zlade knelt on one knee and licked the head of Adam’s cock. The human let out a groan followed by a shaky breath. “Don’t fight it. If you like it, tell me so.”

Zlade gave Adam what he wanted. He swallowed the full length of his warm cock, pressing it between his tongue and pallet as he sucked with just the right amount of pressure to drive the human wild. He got the desired reaction. Adam let out his breath, his body slumping as he threaded his hands into Zlade’s hair. He was well aware James and Grath watched the intimate show, and he hoped it aroused James enough to want to join in.

He savored the tart taste of the human dick, sucking long and hard, determined to bring Adam to a desperate precipice. There was no way these men would agree to travel to Mythios with strangers if there was nothing in it for them. Sex could come first, and love could develop with time. For Grath and Zlade, their fates were already sealed. As soon as they bit their mates, the bond would forever connect them to the humans. Nothing would come between them.

“Oh my God,” Adam cried out. It was the warning he needed. Zlade pulled back, not allowing the human to finish. He stood up and waited for a reaction.

If you liked the first book in this series,the second one is just as good. Twin brothers go to earth this time looking for their mate. And the outcome is twice the fun. It&#039;s a witty and funny short read. Definitely one that will be reread over and over.

Claiming Their Human by Eva Evans

Claiming Their Lover by Eva Evans