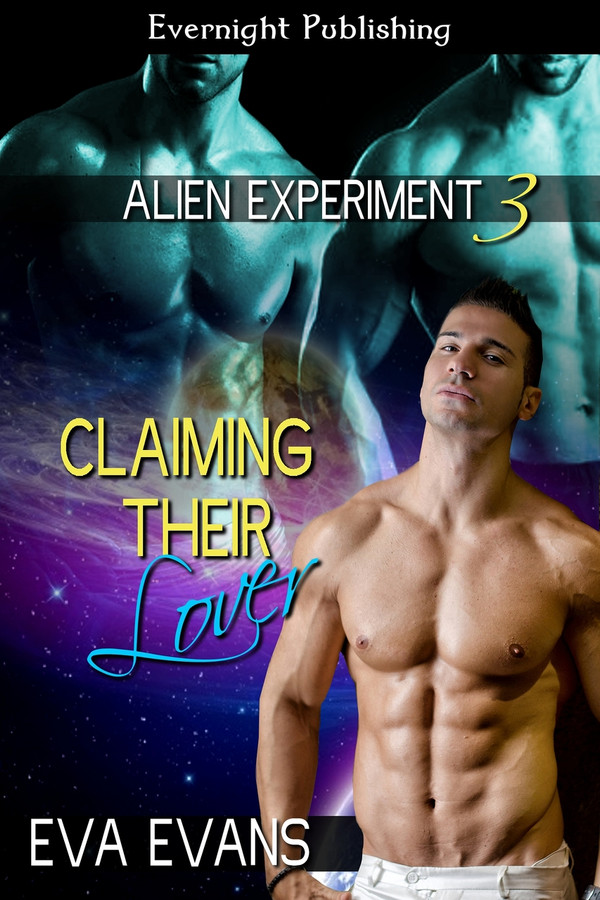 Dean is ready to throw in the towel at work. It's not the intense manual labor that bothers him, but the backward attitudes of the men at the lumber camp. When he's scouting out a potential new road deep in the northern wilderness, he comes upon something that will change his life forever.

Dolph and Zyr are opposites in every way—except for the fact they're both fated to the same human male. Finding their lover on Earth is only half the battle. Getting along with each other is their biggest obstacle.

The three men must learn to accept one another, physically and emotionally, to have the hope of a loving future together.

Dolph used his communicator to signal his imminent arrival at the southern space dock. He could already spot small pockets of civilization below—life in a sea of nothingness. As he lowered his craft, he could see the heat radiating off the eroded land. This was his first time in the region, and the only reason he dared to show up was to retrieve his spacecraft. He didn’t look forward to leaving the climate-controlled interior of his craft.

Zyr’s deep baritone that came through the intercom. “Land in dock two.”

Dolph expected the spaceport personnel, not his unwelcome travel companion. He did as requested, descending into the correct dock as he switched on his landing gear. His hovercraft stirred up the orange dust as it settled, and everything blurred out until he turned off the engine. He took a deep breath before finally standing and opening the glass hatch. As much as he didn’t want this meeting to take place, it was the first step to finding his real mate.

The crew rushed forward from several directions to secure the craft, ignoring him as he walked toward the stairs leading out of the space dock. The air was thick, making it difficult to breathe. He remembered how fresh and crisp the air was back home at this time of year. This place was stifling, like the habitat humans referred to as Hell. There was no way their mate could tolerate such harsh conditions, and Zyr would have to respect that. He’d explain that humans were fragile and sensitive to extreme temperatures. It would ensure they lived on his sprawling ranch to the north of Mythios, the home he never wanted to leave. It had been passed down to him by his father before his death. He’d never found his life mate, and he was adamant that Dolph not live out his last days alone and bitter like he had.

“It’s about time you showed up. I’ve been waiting for hours.”

“I said I’d arrive at twelve, and it’s twelve.” Dolph refused to show weakness. It would set him up for constant manipulation. If he wanted to be respected, he had to show no fear, no submissiveness whatsoever.

Zyr grumbled something incoherent and motioned for him to follow. As they climbed the long flight of concrete stairs, the air felt even heavier in his lungs with each step. He had to stop to catch his breath.

Zyr didn’t notice he’d stopped until he was half way up the stairs. When he finally turned to check, he glared down disapprovingly. “You’ll adjust,” he called down. “Your body is built no different than mine.”

Zyr was right. Dolph had expected ten-foot giants with gnarly teeth and lethal claws. Instead, the other Mandor was similar in size at just over seven feet tall. The only notable difference was the rough edge and no-holds-barred attitude that clung to Zyr. His clothes were tattered, his hair disheveled, and he tolerated the harsh climate with ease—unlike Dolph. Dolph felt nauseous and weak when he desperately wanted to prove his manhood to Zyr.

“I’m coming.” He forced himself to take one step at a time, his lungs hungry for air. If he focused too much on his lack of oxygen, he’d panic and make a fool of himself. He concentrated on his training, the intense meditation that was drilled into all of them since childhood.

When he reached the top landing, Zyr was standing to the side, pointing at the near distance. The vast upper platform was bathed in harsh sunlight, forcing him to squint. Dolph followed his outstretched arm to the large spacecraft. “Is that what I think it is?”

“I said I’d purchase the best.”

They walked side by side toward the craft, Dolph’s attention riveted on the glimmering metallic surfaces. It was magnificent, an engineering marvel that would easily take them across the universe to Earth.

Finding a mate on Mythios is impossible because Mandorians are not compatible with their own kind. Those lucky enough for The Oracle to give them a prophesy find their mates on other worlds. Dolph has worked hard on his farm and saved to finance a trip to Earth. It is his one chance to find a mate. The Oracle has prophesied that his mate is there. All he has to do is go get him. But Dolph is afraid something, or someone, will ruin his chance. Zyr never thought The Oracle would declare a mate for him. His life hasn’t exactly been great. Or even good for that matter. It all feels too good to be true. Plus he has to share his mate…with Dolph. Like it or not, they have to get along because this mission won’t work if they don’t. And it’s a long trip to Earth. I thoroughly enjoyed this story. Dolph and Zyr are opposites but that’s a good thing. Dolph tempers Zyr’s forcefulness. Zyr is rough where Dolph is gentle. Dolph is excited to go off world and Zyr doesn’t like being out of his element. Mix in their misconceptions of each other and you get a rocky start. Zyr is my favorite. He is rough, fierce, a survivor, hesitant, nervous, protective, unsure all at the same time. And I have no doubt that if I was to come across them in a forest, they’d be my fantasy men too! Yummy!

Another hit by Eva Evans in this fun and sexy series Alien Experiment. This time is a lumbered who was out looking for a suitable roads for the plumber to pass due to wet road conditions when once again, the alien ship crash lands. The dynamics between the characters is what is so good about this book that it keeps you going page after page wondering what will happen next. Definitely one that I would recommend to friends and family.

Claiming Their Human by Eva Evans

Claiming Their Men by Eva Evans

The Claiming by Sam Crescent