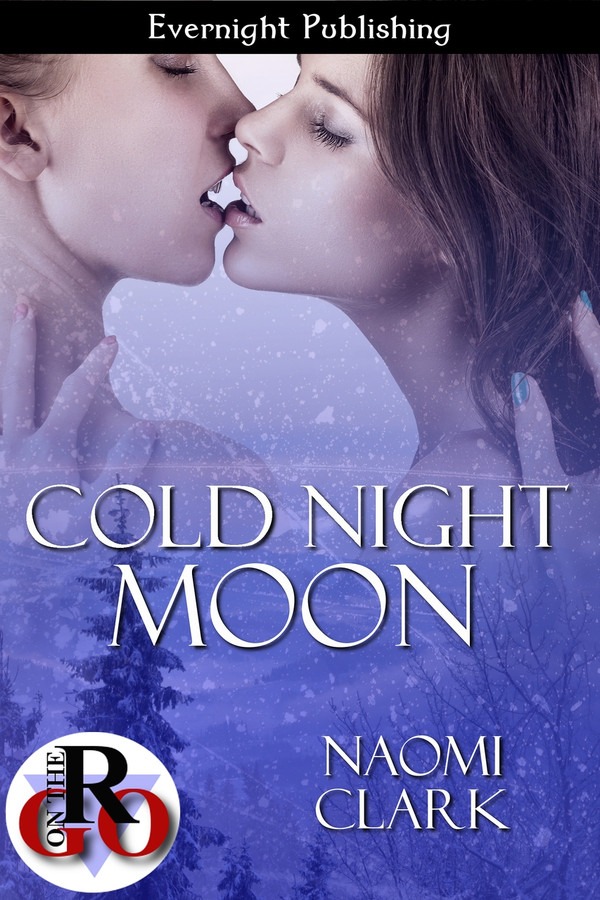 After a difficult year, Ayla Hammond wants to give her girlfriend Shannon a dream Christmas. A cozy, romantic cabin in the woods seems like the perfect way to put their troubles behind them and start the New Year right. And at first, everything is going according to Ayla's plan...until night falls.

There's something in the woods. And it's after Shannon.

I woke suddenly, shivering and on high alert. Was it just being in a strange bed? No. Shannon was gone and the bedroom window was wide open. Night air and snowflakes rushed into the bedroom. I leapt up and pulled the window closed, listening for my mate. She’d probably just gone to use the bathroom, but …why open the window? It was freezing out there.

I stood in the dark, hugging myself and staring out at the shadowy, snowy forest. Shivers crawled down my spine that had nothing to do with the cold. I knew I was prone to paranoia. After everything that had happened to us in the past year, it would be a miracle if I wasn’t. So every time I felt those flickers of neurosis, I tried to stop and think logically through my worries.

The obvious answer was that, yes, she was using the bathroom, and that I should get back under the warm duvet and wait for her to return. Or she’d gone to get a glass of water and again, I should get back into bed instead of standing around with my teeth chattering.

But I didn’t hear water running, or any sounds from the bathroom, and I decided that even if it was a touch paranoid, it wouldn’t hurt to poke my head out into the main room and see if Shannon was in there.

When I opened the bedroom door, another blast of cold air hit me. The cabin door was open, and flurries of snow were tossed in by the wind, piling up quickly on the doorstep. I hurried over and saw footprints in the snow. Alarmed, and heedless of the cold, I rushed outside. “Shannon!”

She stood on the porch, hands clutching the railing. She was naked and shaking, skin blue in the moonlight, and she didn’t react to my shout. I grabbed her from behind, tugging her away from the railing. “Shannon, what are you doing? You’ll freeze to death!”

“But it’s so beautiful,” she mumbled.

I pressed her body to mine, staring over her shoulder at the woodlands. I saw nothing but snow and darkness, heard nothing but the whip of the wind. “Come back inside,” I said, deeply unsettled. “You need to warm up.”

“But I can’t hear her inside. I have to go into the woods.” Shannon struggled in my arms, trying to pull free.

Even the strongest human would be hard-pressed to fight a werewolf on their own. Shannon had no chance of breaking free of my grip, but her words, and her dream-like tone, had me frightened and unfocused. For a second we struggled there, sliding around on the icy wood. My feet were numb, my arms and legs were quaking, and Shannon was dead-weight, fighting me by hanging limp and heavy in my arms.

When a wolf goes prowling in the dark of the woods, passion looms large in the night. Shannon and Ayla are going on a camping trip to a wooded cabin in December. The Lake District is known for its scenic beauty, but when they arrive, things go from fun to frightening as something begins to call to Shannon. Meeting a stranger, they learn he has lost someone to the lake and warns them to beware. It doesn’t take long to find out why in this short novella. A creature hungers beneath the waves and it has locked its sights on Shannon. Can Ayla save her lover from a grisly death? This hot little book was a blast to read. Werewolves, sexy interludes between the women and a romp through the forest to battle a creature intent on claiming Shannon for her own. I loved Clark’s pacing and the interplay between the characters. It was action packed and made me want to go back and read the rest of the series. I didn’t feel lost as I have with some other books where it is obviously a continuation of a story. The author did a great job of recapping what went on before but not so it got in the way of the current story. Great read for anyone who enjoys a bit of f/f romance with a supernatural bite.

I wouldn’t say that Cold Night Moon by Naomi Clark is a Christmas story, but a story that takes place around Christmas. But what a story it was; filled with werewolves, past tales of a vampire and now a nixie (aka water fairy). This is actually book #5 in Naomi Clark’s Urban Wolf series. Ayla is a werewolf who is mated to Shannon who, from what I can tell, is not a werewolf. They decide to get away for Christmas after an extremely rough year. Ayla has rented a cabin in the woods by a lake. She wants a nice relaxing stay with her mate. The first night they are there Ayla wakes up to find the window in their room open and Shannon not in bed. She eventually finds Shannon on the front porch, naked. Not that she didn’t appreciate the site, but what the heck? When Ayla approaches Shannon, she realizes that Shannon is there physically but not mentally. Shannon keeps talking about listening to the woman sing. She needs to get closer. Go find the woman with the beautiful voice. The next day Ayla and Shannon decide to go for a walk. As they get closer to the lake Shannon again mentally starts to check out and picks up her pace. Ayla can’t get through to her and eventually has to become physical and headbutts Shannon to knock her out. As she’s carrying Shannon back to the cabin she runs into their neighbor, Aled. Upon hearing that Ayla had to knock Shannon unconscious, he tells the fateful journey of his wife’s death. They were there on holiday to help with his wife’s depression when she heard singing. Aled followed his wife to the lake to see her walk right into the nixie’s arms and then drown. From there they must hatch a plan together to ensure nobody ever dies again by the hands of the nixie. Unfortunately, they don’t really know anything about nixies so the plan is based on what they hope will work. I enjoyed Cold Night Moon. The suspicion of what in the world was going on really kept me reading. Well, that and the nice sexy time they shared in front of the fire. Who doesn’t love some nice lovemaking on a rug in front of a fire? Answer: nobody!

Night and Chaos by Naomi Clark