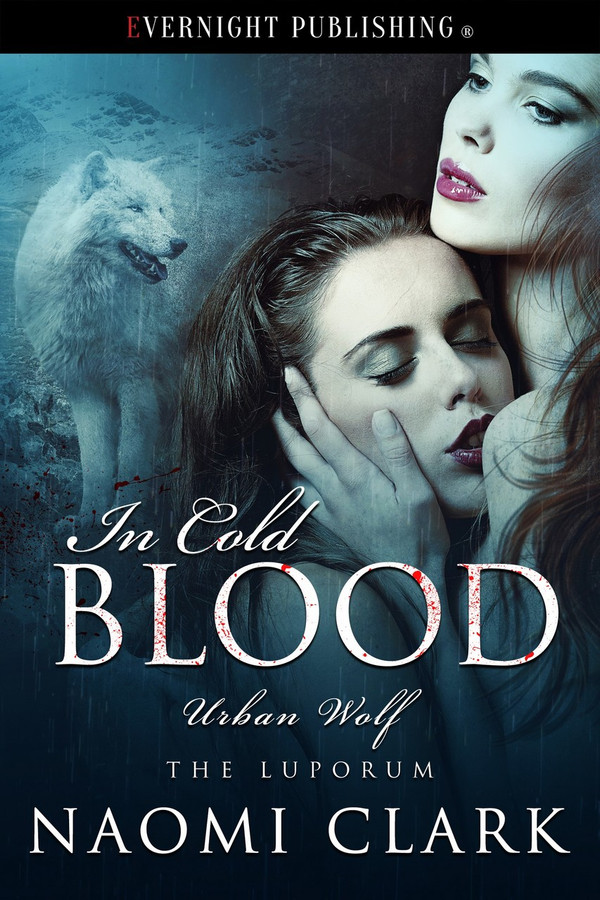 Phoebe Fairley wanted to be a librarian. Somehow, she’s become a vampire hunter. Women are dying across the country and the police are baffled. Phoebe’s just supposed to be gathering information on the deaths, but as the body count mounts, she can’t help but break the rules and get involved. She knows what the killer is—and catching and containing it is vital. If she can persuade the police to believe her, and keep her secretive bosses happy, she stands a chance of capturing a very real, very deadly vampire. Not bad for a werewolf who can’t shapeshift.

Aisling is happy living as a feral wolf. She’s got no time for human affairs, until a mysterious creature attacks her and leaves her in human hands. Now, if she wants her life back, she’ll have to join Phoebe’s hunt. There are just a couple of snags. One, she hates humans. And two, she’s falling hard for Phoebe. With a monster to catch and her own past to protect, will Aisling trust her head or her heart?

“This one's exactly the same.” Phoebe Fairley held a lavender-scented handkerchief to her nose as she crouched over the dead body. Her senses were muted compared to a normal werewolf's, but still sharp enough that the mingled scents of blood and sweet rot bothered her. The rot more so than the blood––it meant she knew what had killed this woman, and she didn't like the knowledge.

Her companion swore. Inspector Aidan Spalding had a beautiful voice, Phoebe thought: a rich, sonorous baritone. It made even the most explicit curse words sound elegant. “Fucking hellfire, Fairley. What is it?”

She didn't answer. Instead she stood, stepping away from the dead woman on the alley floor and inhaling a deep whiff of lavender. Pre-dawn light filled the dark stone passageway, casting a solemn glow over both the corpse and the litter of broken bottles and cigarette ends. Just an ordinary woman, Phoebe thought. Probably just stepped out of the club next door for a cigarette, or a breath of fresh air. Although her lack of a coat argued against that––the skimpy miniskirt and halter-neck top would have offered no protection against the cold weather. Maybe she'd been lured outside by her killer?

Well, no. Not if her killer was who, or rather what, Phoebe suspected. She gave Spalding a tired smile. “It's not a wolf, if that's what you're worried about,” she said.

“I already knew that,” he snapped. “Never seen a wolf kill like this.”

Spalding was human, but any officer working in Major Investigations would know what a wolf kill looked like. There was a long, sad history of serial killer werewolves and whilst the motives might vary, the methods rarely did. Messy kills––maulings, really. This wasn't a mauling. This was a neat, quick kill. A broken neck, puncture wounds near the major arteries. Phoebe didn't need the autopsy results to know the woman would be missing a lot of blood.

This was the fifth such body she'd seen in as many months. The first had been south of the border in Northumberland. Another young woman, caught sometime after midnight, neck broken, blood missing. The next three had seen the killer slowly moving north through Scotland. And now this one, number five. The Luporum had sent her to investigate as soon as the news of the first killing broke.

She presented herself at each scene as a government official, and the Luporum had provided her a solid cover. When she'd shown up at the Dundee City Center Police Office two hours ago, Aidan Spalding had agreed to let her come to the crime scene without hesitation, assuming she'd have vital information.

“We've heard about the other murders,” he'd said as he escorted her to his car. “We'd appreciate an expert's opinion.”

The problem was, she couldn't share her expert opinion. Humanity had come to terms with werewolves, mostly. Vampires, that was a whole new issue, and one the Luporum didn't think the world was ready for. Phoebe agreed wholeheartedly.

Once again, Naomi has wooed me with her ability to bring a story, and more importantly, a cast of complex characters to life. I don’t tend to read a lot of paranormal /shifter stories as I either find myself lost or unable to suspend belief enough to become invested in the plot. Phoebe, the main character is a fully fleshed out likable character. What makes this story unique is that she suffers from Siodmak’s Syndrome – the physical inability to shape-shift. Although my heart went out to her when her wolf wanted to get out, I loved the way she coped with the condition, and it had no bearing on her ability to investigate a brutal murder. The sub-plot of feral She-wolf, Aisling, living in a nearby cave is effortlessly interwoven into the story with just enough snippets to make the reader wonder where and how she will play a bigger part in the story. None of it is predictable, some of it is gut-wrenching, all of it is riveting. There’s one smoking hot sex scene that threaten to make my kindle combust, and left me panting for more. After a tense take-down and uncertain outcome, the ending made me grin like a loon, and I might’ve even swooned a little. I particularly liked that it was realistic. No false promises or insta-love, but the giddy feeling of new love and all the possibilities that lay ahead.