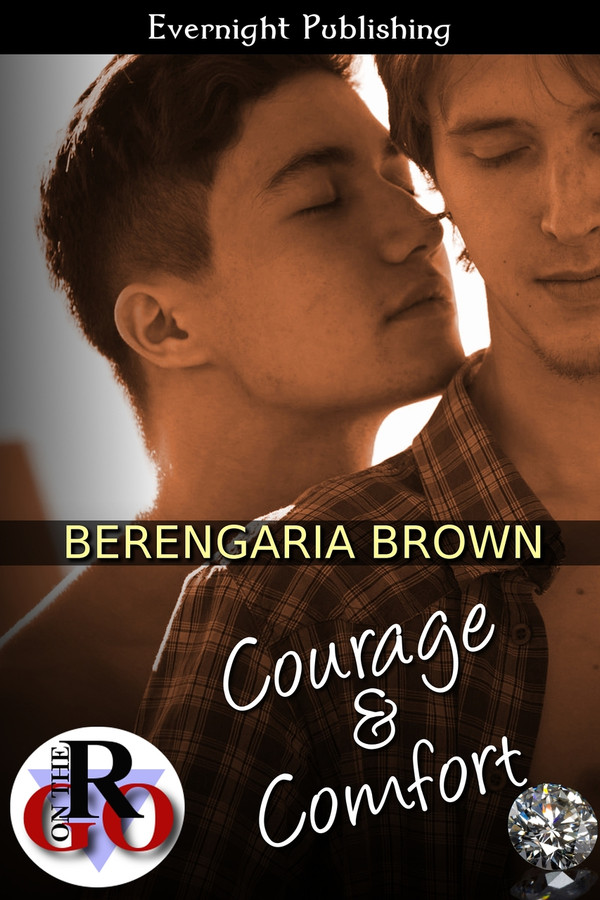 Edmund’s sister, Mavis, was tragically widowed by a hit-and-run driver when her husband was rushing to the hospital for the birth of their son. Mavis cannot cope with the loss of her husband and care for a new, fatherless baby.

Mavis’s friend, AJ, tells Edmund he and his partner, Utah, must go and retrieve the Aquamarine. The stone will bring courage and comfort to Mavis. It will hold the spirit of her dead husband, and she will be able to rear their son and have a fulfilling life.

Only lovers can find the stone. Edmund and Utah are a little skeptical but very willing to try.

Utah gave Edmund a thumbs-up, then swam over to the sandbar and floated across it until he reached a high point where he could sit with his head out of the water. Gratefully, he sank onto his haunches, then onto his ass, letting his aching legs stretch and float in the shallow water. He looked at the sky, resting his arms behind him, filling his lungs with clean air and his face with sunlight.

This was a beautiful place. The air was so crisp and clean, with a delicious salty tang to it, that every breath was like savoring a tasty meal. The beach was a mile of pristine sand, the water was clear, and the deep blue of the sea met the brighter blue of the horizon in a line far out in the distance. Even the rock cliff at the end of the beach was a stunning sight of colorful layers—reds, ochers, browns—and interesting shapes where the cliff had been eroded by the water over millennia. If he wasn’t here on a quest for the Aquamarine, he’d be more than happy to just sit and fill his eyes with nature’s wonders for hours on end.

Of course, the most interesting shape of all was the sleek black form of Edmund, slowly swimming up and down near the edge of the sandbar. The man was beautiful too. Kind of like an aquamarine even, with his pale skin, blond hair, and light blue eyes. They’d been together for over two years now, and Utah had known the instant they’d met they were right for each other.

Utah sat a little straighter and moved one arm from behind him to his lap, sliding his hand inside his swimwear to tug on his cock under the water. He smiled to himself. Two years into the relationship, and his dick still became hard the moment he thought of Edmund. They fit together like two parts of a whole.

Courage and Comfort is the first book in the Gemstone Romances series by Berengaria Brown. I chose this book because after reading the summary, it looked interesting and I wanted to see how it would turn out. Edmund and Utah are a couple helping Edmund’s sister cope with a newborn baby and the loss of her husband. It was hard to get a good feel of the individual characters because of how short they story was and they did not spend much time alone from the other. They were very caring to go on the journey they did to help Edmund’s sister. The connection between Edmund and Utah is intense. The journey is interesting. It also seemed to help both Edmund and Utah spend time together that they have been lacking while they helped Edmund’s sister. The sex scenes were spicy and fit well into the overall story. This book is very well written. The overall plot was very mysterious. The main and secondary characters were fascinating and appealing. This book has a well-defined beginning, middle and end in only 34 pages. The ending of the story was a bit predictable but given the overall length of the story, it was expected. Overall, this was a great book. I can’t wait to read the next book in the series.

The healing power of gemstones and crystals has been the topic of many a speculation, and an untold number of stories. ‘Courage ad Comfort’ takes a look at the powers of the aquamarine in a modern context, yet with a definite touch of the supernatural that adds an extra dimension to the tale. Edmund is desperate to help his sister, Mavis, recover from the shock of losing her husband who died on the way to the hospital to witness the birth of their baby. Edmund has already done what he can in terms of physical and emotional support, but Mavis needs more. So when AJ, a friend of hers, starts talking about the need to find the aquamarine to help Mavis recover, Edmund is more open to the idea of something “mystical” helping his sister than he might have been under normal circumstances. He remains a little skeptical, but hey, it doesn’t hurt to try. Utah is Edmund’s partner of two years. He is just as reluctant to believe some stone will be able to help, but he doesn’t; have a better idea and would do anything to help his lover. The adventure that follows as they try to find the fabled stone is a lot of fun as they get to play in the water in between diving for the aquamarine, but it also helps them reaffirm their love and realize how lucky they really are to have found each other. If you like stories with a touch of the fantastical, if you enjoy reading about the mystical powers of gemstones and their effects on some people’s lives, and if you’re looking for an entertaining and very hot read, then you might like this short story.