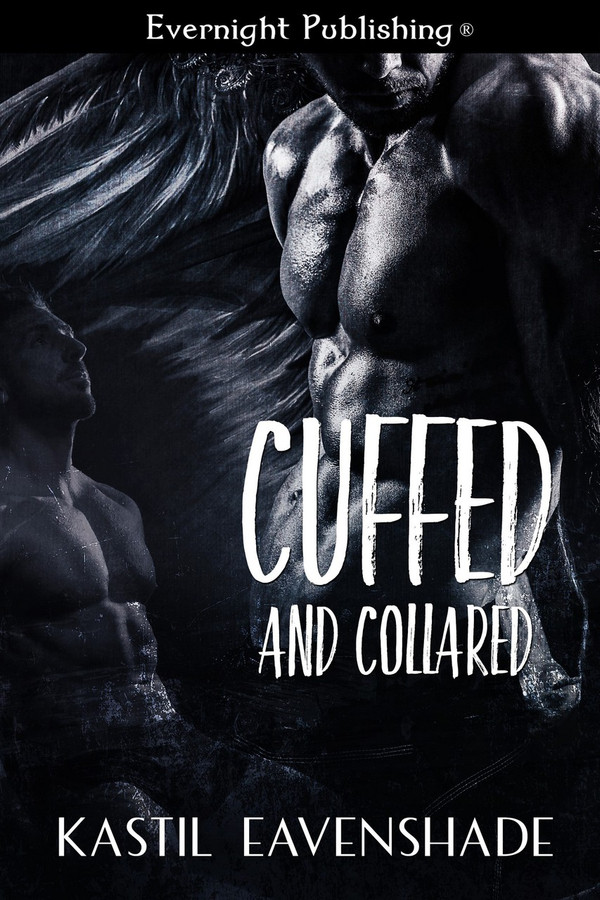 A creature born in sin and debauchery, Markus Theo is as insatiable as they come. He’s relegated himself to a rather shallow life of sucking souls and committing petty theft—until a sexy half-incubus cop cuffs him to a table for more than just questioning. A prison cell is the least of Markus’s worries when tempting Detective Leo Vincent collars him and ignites a hunger like no other. Something stirs beyond the carnal greed and one kiss brands his damned soul.

Lost in a world of submission and sin, Markus will do anything for his lover—even infiltrate the underbelly of an incubus crime operation. But when a piece of his past surfaces and threatens to destroy everything, he must choose between losing Leo or his anonymity. Never wanting to return to the emptiness that was his life before, Markus prepares to sacrifice his freedom for the one thing he has never known. A man he truly loves.

I glanced at the cop in the corner. His eyes never met mine but his hand wavered near his gun. I slumped in the chair, regarding the person in front of me. The detective also wore a gun at his side. Could I possibly beguile him and start a skirmish between the two? If I got lucky, someone would come in to break them up and I could slip out, but what then? By his build, I'd rather use my abilities to have him under the table in blow job city. However, that broke my “no cop” rule.

"Here's the thing." I tapped the papers. "These don't exist." My tone was low, meant only for him. I stared into his eyes, letting my natural pheromones saturate the air. "In fact, you've never seen them before."

He sat back, his jaw unhinged. As I opened my mouth for the killing blow, he laughed at me.

What had just happened?

"Thing is, your latest fuck toy told me what you are and, well…" He stood and walked over to my side of the table, laying his filthy hands on my shoulders. "I'm part incubus so none of your tricks are going to work on me." He whispered in my ear. "Why do you think I took the case? I'm the only one who remembers those two other cases in front of you."

He moved back to his side of the table. Cold washed over me and I prepared myself for the fate in front of me were I to return to prison. Gnawing hunger and never getting enough soul sucking to control the ache. The detective snapped his fingers and the cop went to the door, tapping a few times. The door opened and he exited, leaving me and the half-breed alone.

"Just so you know, you didn't have to lower your voice. No one is behind the glass and Officer Bergon was under my control." He laced his fingers together. His tongue wet his lips and I imagined him using his cuffs to restrain me for an unlawful carnal fuck. Thoughts I tried quickly to purge.

"So get this over with." I pushed the papers back to him. My mind refused to eradicate how damn sexy he was. Now wasn't the time for temptation with incarceration on the line.

"Not that simple. Your fuck toy that turned you in? I've been watching him for a long time. I thought you were an interesting part of the puzzle—an incubus stealing to pay for a small taste of such a small soul when you could have fed on better."

"I have fed on better." I spat to the side. "How about we get to the meat of why you have me in here. You know … brother," I pointed to me, "to half-wannabe." My finger swung his way.

He spread out his arms. "Donnie Peterson has more than you on his roster. The man you saw him with when you got arrested? Just another one of his pawns like you."

"You're going to be everyone's pawn if you don't drop the attitude and listen up." He pounded the table.

Good cop and bad cop all rolled into one hot mess. I'd have been lying to myself if I didn't give him credit for being a tasty treat. If no one was truly watching, I'd be wishing he'd slam me down on this table and show me how big his cock was. As my thoughts ran wild, I caught a dark glower growing in his eyes as his pupils enlarged. So, I could affect him.

"Are you saying you want to save my ass from being the latest buffet line in county? I mean, if you’re here and know what I am, then you know exactly where to put me to make my life hell."

"I want you to find out who is the king to the bishop you've been dealing with."

"Donnie works for someone else?"

He chuckled. "You never noticed his many trips?"

"I never cared. Not like he's the only fuck in town. He was just a good steady hook up without the hassle." I inspected my fingernails. "If I help you, what's going to give me what I need to have a clear conscience?" And a clear record without any proof left lying around for the next half-breed asshole. It was bad for one in my line of work to be tied to a cop. I did have some morals, however loose they may be.

"Only if you listen to exactly what I tell you."

I pondered his arrangement. I had no issue playing the part of a sub, if that was what he was implying. The matter, however, of Donnie was my problem. I wanted to get back at him for what he'd attempted to do. I couldn't pay that little bitch back behind bars.

"And if you release me how does that work exactly? Donnie knows you arrested me. He thinks I'm gone and not his problem anymore."

"He has no idea you got picked up." The detective grinned. Sneaky incognito man in blue had covered all his tracks, so it seemed.

"You're a piece of work." Okay, I'd be lying if I didn't want to fuck him. Was he releasing pheromones to beguile me? I shook my head at the thought. "Deal."

He nodded. "My name is Leo Vincent. I'm going to bring you out the back way and you're going to waltz back in the front and ask for me. Tell them you have information on Donnie Peterson."

He stood and leaned in. "Then I'm going to fuck you like you've been fantasizing this whole time."

Sexy and interesting read. The story is intriguing and surprising and gets really hot and even more interesting when Marcus finally meets Leo. Sometimes the reading flow seems, well, like a small hiccup and you have to go back a tiny step, but that happens not that often. So I could live with it, because on the next page you got drawn right back into the story immediatly. And now I am curious if we will have the chance to read more of Marcus some time in the future?