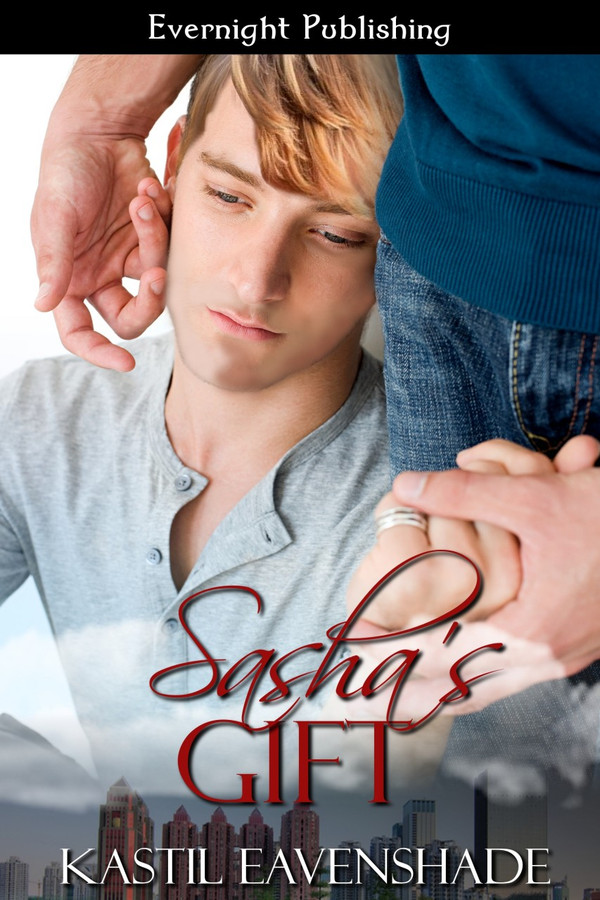 When an old lover shows up out of the blue and gives him a way off the streets, Sasha thinks he's back on track. It’s not until he finds out his friend only wants him as a prize to pimp out to the highest bidder that Sasha realizes his past could haunt him forever.

To break free of what he once was, Sasha has to learn how to trust someone he's only known through the local soup kitchen. It won't be an easy round when his savior David shows him there's more to love than handcuffs and leather.

Sasha’s hands flew to the buttons holding back the object of his desire. He’d missed his foreplay with Cassidy, the command of his lover’s voice, and the pure raw animalistic adrenaline. The dark pink head contrasted deliciously with the ebony glow of the shaft. Sasha ran his fingers over the magnificent cock, and Cassidy jerked on the belt.

“No hands, bitch. Suck my cock slow. You make me come too fast and I’m not going to fuck that sweet little ass of yours.”

Lips dry from the thought of Cassidy withholding, Sasha dipped his head forward and took the tip into his mouth. His tongue swirled along the base before he released his hold. He wanted to savor the taste of his lover. He nipped at the tender flesh and dragged his tongue along the entire length.  His gaze travelled upward to take in Cassidy’s hooded stare and tight grip on the belt.

Again he devoured the cock and buried it to the base of the shaft. His piercing tickled the underbelly as his tongue twitched. The small round end of his piercing glided up the shaft as he eased the cock slowly out of his mouth before slamming it back in. The belt around his neck tightened a bit but eased as Sasha increased his pace.

“Oh you haven’t lost it, baby boy.” Cassidy nodded to the back of the apartment. “Get going to the bedroom.”

Sasha turned around and marched to the back after Cassidy slapped his palm across his cheeks. When Sasha had an apartment, he preferred his lovers over with the option for them to stay until morning. Exhausting his fuck buddy for the evening was always a priority. His freebies with the staff of the night club increased his earnings with potential clients. Cassidy was the only partner never seduced into Sasha’s apartment. The control in their relationship resided within his ebony lover’s place.

Cassidy was right on one account. Sasha was the best whore Blue Xpress employed.

In the bedroom, fur-lined straps hung from the iron backboard. With another stinging slap from Cassidy, Sasha climbed up and waited. The pressure from the belt subsided as Cassidy secured Sasha’s wrists to the bed. With a rough grip on his jaw, Cassidy claimed Sasha’s mouth. Deep and demanding, Sasha held back from pressing the torturous kiss. He wanted to wrap his arms around Cassidy and taste every inch of him.

Cassidy broke off and a whimper escaped Sasha. His friend grinned as he towered over him. Sasha steadied his gaze on Cassidy’s as his generous lover rubbed the head of his cock along Sasha’s lips.

“You my little bitch, Sasha.” Cassidy pushed his cock through Sasha’s closed lips. He thrust his hips before pulling out. “Say it.”

“I’m your little bitch.” As the words left his mouth, Sasha’s cock swelled and ached for release. Cassidy grinned and lifted his shaft to expose his taut twin sacs. Sasha dove in, his pierced tongue lavishing his delectable treat.

As Cassidy pulled away, Sasha buried his head in the pillows, tucked his knees near his chest. His cock twitched, begging to be stroke to completion. He clenched his fists against the desire and shuddered as the distinct sound of a condom wrapper tearing hit his ear. Gentle probing invading his backdoor and a whoosh of liquid filled his core.

“I treat my bitches good.” Cassidy whispered. Another crack of the palm hit against Sasha’s ass. The pinching pain of entry stole Sasha’s breath and his ass opened wide for the intrusion. Cassidy stilled his cock inside Sasha. Another wave of pleasure rippled through Sasha’s veins. His hands wrapped around the straps connected to the bed as Cassidy took a hold of the belt again.

The first pounding stroke had Sasha gritted his teeth. His need to come almost overwhelmed him. Another yank from the belt bent his head back a bit.

Sasha rocked back on his lover’s cock, sheathing it whole in his rectum before surging forward.

Cassidy groaned behind him. “Damn.”

Sasha’s head fell forward as Cassidy released the belt in favor of holding on to Sasha’s slim hips. Flesh slapped into flesh at a frenzied pace. The pressure grew and eased with each swift stroke. Cassidy wrapped his arms around Sasha’s waist and pressed against his back. The weight drove Sasha into the mattress.  His cock piercing rubbed against the sheets, the rhythm matching the harried pace of his lover.

Cassidy’s moans escalated in Sasha’s ear as his thrusts became more forceful. Cassidy’s cock pulsed inside Sasha’s tight hole. Unable to contain his wave of pleasure, Sasha groaned beneath Cassidy as his shaft shuddered.  The belt came loose from his neck as Cassidy’s body rolled off.

Sasha turned to face Cassidy. “I fucking love you.”

Cassidy grinned. “Bitches always love me.” He peeled off the condom and tossed it in the trashcan by the edge of the bed. “I got a party tonight in the underground. You’re coming to make up for forgetting your role, girlfriend.”

“Cash party, you know what I’m saying?” Cassidy rubbed two fingers together. “I get you in and you do what you do, Sasha.”

I loved the mystery of it,Not know what was going to happen next Sasha&#039;s&quot; Gift is very good, because it keeps your intresr to the end, and then you don&#039;t want it to end.