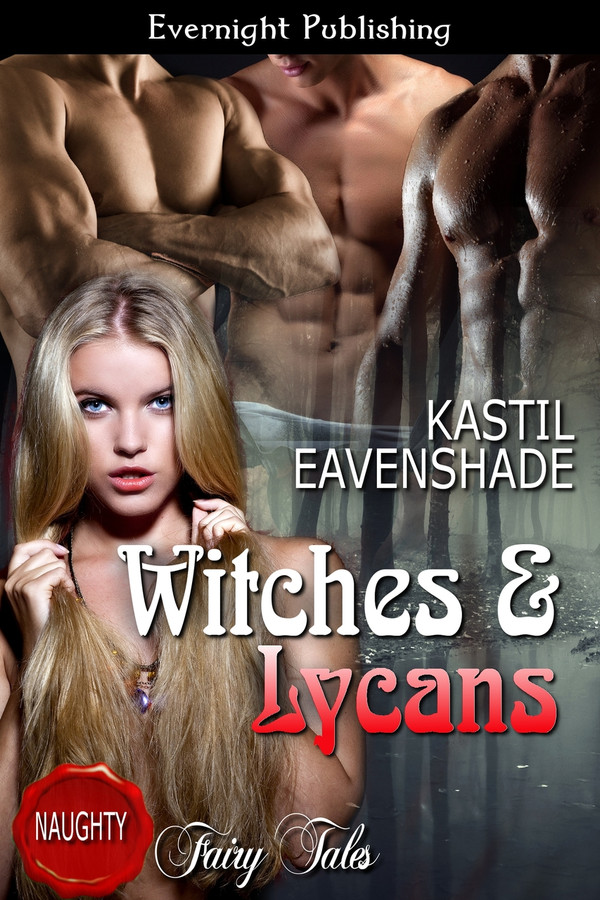 John Hansel and Susan Gretel live in the small town of Beowulf Hollow. Nothing's more of a drag than having to spend their summer in their backwater home. When Susan hooks up with the local bad boy David at a swinger's party while her boyfriend John watches, she finds out that he's more than a sexual beast in the sack.

Armed with nothing but innate powers she never knew she possessed and her lover John, Susan's got to fight back a threat bearing down on Beowulf Hollow. One that starts with a pair of grey eyes belonging to a man who knows every intimate inch of her flesh—David.

She reached the edge of the clearing and entered the forest. She'd skirt the outside and watch as the others mingled. The incense burning, while pleasant, was starting to fog her brain.  Her fingertips danced along the bushes. Shivers ran down her spine as a cool breeze tickled her skin. A strong, possessive grip caught her from behind.

"Change your mind about Tim?" David licked her lobe.

"No." She moaned as his hands slipped up her blouse and rested on her left breast.

"You think he's going to be able to handle you like me? He's just a pup." He tweaked her nipple.

"Playing alpha dog again, David?" She chuckled before sucking in a deep breath as David's other hand possessed her right breast. He'd always treated these swinger retreats like the men were a pack of wild animals that needed to be tamed. Only David could have a pick of the bitches like some odd commune. He watches too many macho movies and needs to be brought down to size.

Yet, her body never listened when she tried to control the situation.

"He's watching this, you know. I told him I'd show him how a man handles a woman like you." His tongue lapped at her throat.

"Tim?" She tried to take offense to his crass wording, but his hand traveled the length of her belly and shoved her skirt down. Fully exposed to the air, she couldn't deny the moisture evident below. He swiped his thumb against it and hovered the digit in front of her. Her tongue darted out, tasting her sticky sweet arousal. His cock rubbed along the crack of her ass. She took his thumb into her mouth and sucked. Not only had he followed her into the woods, David had done it completely naked.

"No. I am the alpha dog." He removed his thumb and stuck his middle finger between her moistened nether lips. "And you're the best fuck I've ever had."

Words wouldn't form on her lips. All the times she'd had sex with David worked to his advantage. Each inch of her skin was known to him. He could never have her, but he owned her nonetheless.

"On your knees," he demanded.

She dropped to his command, his thick length bobbing in front of her face. Hers to caress and manipulate, she wrapped her lips around the head. David thrust in, his hand fisted in her hair. With slow precision, he fucked her mouth. She cupped and massaged his balls, but he didn't speed up. Her coaxing did not give her the upper hand as it had before. No, his plan was slow torture, hovering between teasing and full arousal. Another shadow fell over her.

What really happened that was so scary and so devastating in 1891, 1916, and 1941? Well, it appears to have been the unthinkable, the unmentionable, and totally cataclysmic. This story takes place in 1966...twenty-five years after 1941. Oh my goodness, the unbelievable and more seems poised and on schedule to happen in Be0wulf Hollow. This book has interwoven some grisly stuff along with some intense loving and curious individuals. I recommend it since it was engaging, yet I also found it a tad unnerving. Vexing and stimulating! Susan is an equal opportunity, intense lover with a secret buried deep within her. She and I only get clued in later in the book on the details. Tantalizing! Additionally, her younger sister is very pesky. These two are going to butt heads big time as the twenty-five-year-old horror slowly covers and sucks in the unprepared. Much to her astonishment, Susan finds herself in rather protective mode in regard to her sister, but implementation appears to be rapidly removed from her scope of influence. Oh my! A major red flag hits my gut big-time as deleterious and dangerous forces toss almost everyone for a king-size shocker. Blindingly disastrous! John is Susan&#039;s soul mate. Their connection proves to be a survival link and an unflinching beacon again and again. I really loved this pair for their super surprising, implacable liaison that was astoundingly open and very 1960s-ish. However, John unquestionably lands in the most complicated and painful of positions, since he is kind of normal from a standard frame of reference. However, his love and connection to Susan proves amazingly important and significant in the big picture. What a darling! Most everyone on the scene is blessed or tainted with larger than life attributes, but John becomes the glue and the saving grace that beautifully balances this story. I suggest keeping your eye on John. Astounding! There is only a hint about an actual threesome sexual encounter that Susan participated in and John watched. The *watching* is an integral and delicious piece of the Susan/John relationship. Susan certainly swings both ways and is also more than capable of actively servicing two guys. She is delightfully stunning in her super heightened sexual proclivities. That is a wonderfully spicy, encompassing element, but the heart of the story is really the eye-opening horror. Confounding and bewildering!