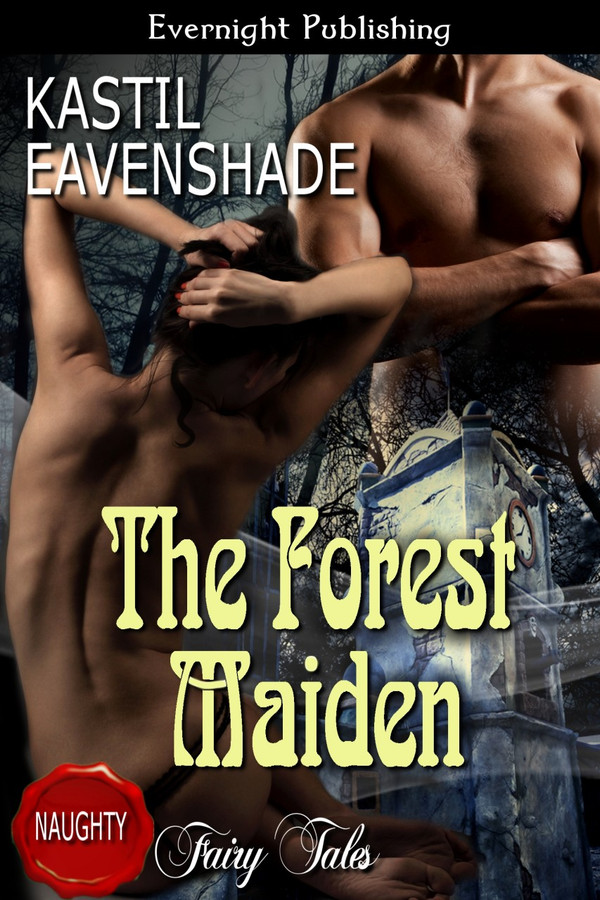 Eirlys Edurne wants nothing to do with the prim and proper world her title endows her. When her father attempts to force her to marry a vile Prince from a neighboring kingdom, she takes flight into the forest. Only the thrill of the hunt and the call of wildlife can tame her until a mysterious man invades her campsite.

The guest at her fire mistakes her as one of Earth Mother's forest maidens. Eirlys uses her feminine wiles to seduce him only to find that her heart has other plans for her mighty warrior. When her father perishes, Eirlys is thrust back into the world she loathes by her stepmother. Will she break free of the woman's clutches and once again reunite with the man who holds her heart?

The mist of evening rolled across the mossy path, hovering just inches off the ground. Eirlys smiled. She loved when the forest cloaked itself in the evening fog. Her palms touched the matted grass at her side, and she breathed in the cool air. Sleep threatened only slightly but something else stirred her into staying awake.

Her guest stayed on the opposite side of the fire, the bones from his meal already part of the fire’s blaze. His cool blue eyes roamed her entire length. She could feel his gaze drinking her lithe form like the refreshing waters of a nearby creek. An ache of need pooled at her apex, the forest’s natural magic sinking into her flesh. On a night like this, she would indulge in self-pleasure, heedless of the world around her. Her fingers sought her waistline but traveled no further. Her upbringing stopped her short. If someone should sneak in the bushes for a show of her manipulations, and she was none the wiser her conscience would come into play. To have a man just feet from her?

Eirlys let out a sigh and shifted. Her arousal brushed against the stitching of her doeskin pants and moisture formed in her nether regions. The spiritual forces in the forest stoked the slow burning fire in her belly. No matter how much she steadied her breathing, her need grew. A shadow crossed over her, and the man straddled one of her legs. His lust heavy in his crystal blue eyes, she reached up with her hands to pull him down onto her.

Their lips met. She moaned as the electrical charge shocked her to her very core. His hand smoothed along her stomach, and Eirlys guided it down to the top of her leggings. Her brave hunter needed no prompting. His fingers unlaced the strings blocking his entry to her intimate area. She arched her back as his seeking captured her swollen nub. Her wetness left no question as to her need.

Eirlys choked back another gasp of pleasure as he strummed her clit like a master of the harp. His heated kisses trailed down her neck to her breasts. Through the thin fabric of her blouse, he nibbled on her perky areola. She gripped the back of his neck, afraid he would come to his senses and stop his sinful assault. The pink of her rosebud appeared through the moistened fabric. Her stranger new lover suckled on her other breast while his free hand caressed her hardened nipple.

Her fingernails dug into the doeskin pants in an attempt to free her body of the confinement. She wanted more than his digits plying her flesh. The forest sang to her in a song only the animals that roamed understood. As if in tune to her wanton desire, the hunter paused to yank down her breeches. Her legs slipped easily out as he tore them off. She couldn’t help but cry out as he lowered his head to her apex. His tongue tortured her soul with one flick across her swollen nub.

She wrapped her legs around his head to trap him against her sex. He supported her bottom as he feasted on her clit. Her juices flowed as she cried out again. A thunderous roar deafened her senses as the spirits swirling around her blessed their union. Her lover rose to his knees, his proud member thick in his hands.

The only sound Eirlys heard was the pounding of the hunter’s heart. His chest glowed and pulsed to the beat. A song of joy and pleasure sung just for her. Her arms beckoned for him to join them as one, and he bore down on her. His cock parted her saturated lips and plunged deep into her core. She held his head against her breast as he rutted like a man possessed. Her hips crashed into him with every thrust. His mouth devoured her aching breasts, teeth clamping on a hardened nipple.

Her own heart thundered in her chest. The joyful feel of his manhood possessing her sex rippled through her soul. His blissful moans were muffled by his dance upon her areolas. Her hands gripped his corded muscles as she shattered.

“I must know your name,” she breathed. Her hunter withdrew his cock at her words. He cried out as his seed spilled upon the damp ground. She watched the majesty of his stroking hand to expel the remains of his pleasure. Fear blossomed in his eyes as he scrambled to redo the laces of his trousers. He ran for the edge of the circle, pausing only long enough to retrieve his weapons before disappearing from her sight.