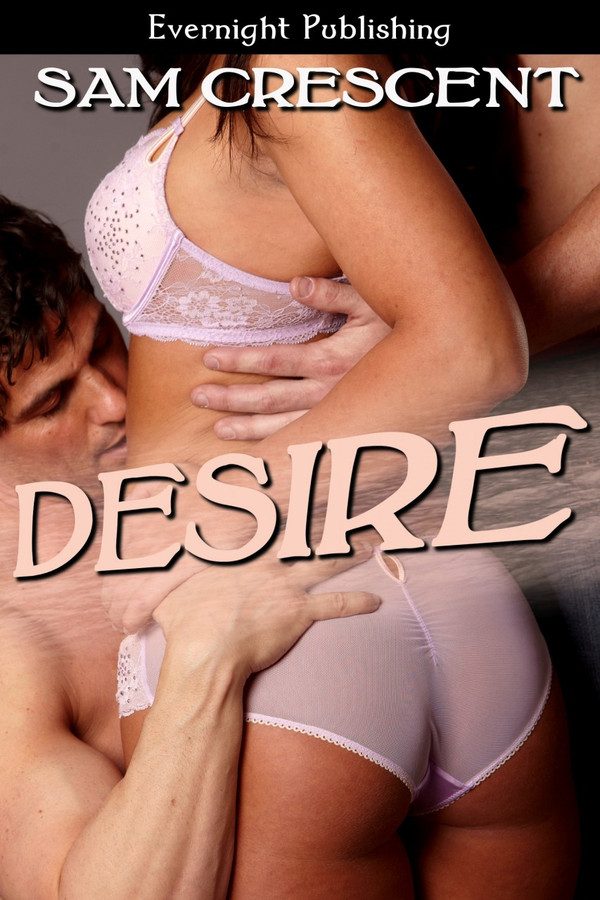 Can a sexual proposition lead to love?

After visiting Desire, a popular club, Wendy never expected to gain the attention of the men who own the club. Evan and Drake Peterson are the reason her father rants and raves like he does. She never intends to get involved.

Evan goes after what he wants and he wants Wendy. Her beauty calls to him and all he can think about is possessing her. Drake promises her untold pleasure, and Evan proposes something she couldn't ever turn down. He offers to make all of her desires come true.

But what happens when the sexual fog lifts and the brothers claim to love her? Can Wendy learn what's in her own heart before it is too late?

The moment he’d seen her walking out of the salon into the bite of the cold air, Drake hadn’t been able to stop himself. Offering her a lift was merely an excuse to spend more time with her.

He didn’t understand the need burning inside him. Never in all of his years had he felt so attracted to a woman. Drake had fucked plenty of women with and without Evan’s presence. None of them made him feel like Wendy. She turned his whole world into knots.

Moving his fingers farther up her thigh he watched her gaze widen as she stared at his hand.

They drove past her apartment. She stared at him, and her hand settled over his on her thigh. “I can’t believe I’m doing this.”

She pushed his hand up, riding her skirt up to her waist. His palm slid against her panties. Her scent grew stronger as he pushed her panties out of the way to slide a finger between her soaking wet folds. Wendy gasped, and Drake took his chance to kiss her. He slammed his lips down on hers demanding she kiss him back. Her tongue peeked out, licking over his bottom lip. She moaned, opening her lips for him to delve into her moist heat. As his tongue slid inside her mouth he slipped a finger into her hot, hungry cunt.

Wendy cried out. Her fingers sank into the length of his hair. She pulled him close pressing her lips harder against his. The passion inside her startled him. Her needy response echoed his.

He added a second finger inside her, pumping them in time with his tongue. Drake pulled away watching her eyes flutter closed as he worked her pussy with his fingers. She looked so damn sexy. The coat she wore hung open on either side of her legs, and her skirt wrapped around her waist with her legs opened wide.

“You look so beautiful.”

Unable to not taste her, Drake slid to the floor, opening her legs wider to receive him. She moved to the centre of the seats staring down at him.

“I’m going to taste you.” He tore the fabric of her panties in two then settled between her thighs inhaling her subtle, sweet scent.

Before she had time to protest, Drake opened her lips and then licked a path from her clit down to her entrance.

She gasped. Her hand stroked his hair as he licked out her pussy.

“More,” she said, gasping when he teased her clit in slow circles. She thrust up to meet him. Glancing up her body, he found the only thing missing was her tits on full glorious display.

Next time, Drake vowed he’d get her naked in the back of the limo.

For now, he was happy to taste her. Her essence exploded on his tongue. Moving his hand to his pants, he opened the zipper and pulled out his throbbing length.

His desire for her was too strong to deny. Taking his cock in hand, he began to pump the shaft. Pre-cum coated the tip, and he rubbed it around the mushroomed head. With his free hand, he pressed two fingers inside her cunt and licked her clit with his tongue. Her fingers glided through his hair making him moan at the feel of her around him.

Her scent would stay with him for the remainder of the day. Drake tightened his grip on his cock working the length as he licked her. Her body shuddered under his tongue. In a matter of seconds she would explode. Her essence leaked out of her as her pleasure started to build.

“I’m going to come,” she said. Her voice sounded breathless.

Drake wasn’t far. Tasting her, watching her, was enough to send him over that blissful edge.

Desire by Sam Crescent is not part of a series but I wish it was. I chose this book because I enjoy reading Ms. Crecent’s books and they are always interesting and intriguing. Wendy goes to a popular Club called Desire to see what all the fuss was about. She did not expect to see Evan and Drake Peterson, her father’s enemy. Evan and Drake bought out her father’s business out from under him. Wendy did not also expect to be attracted to both of them and now she is she can’t decide what to do. Evan and Drake Peterson are both hot and sexy man who love to share the same woman. It seems that a relationship without the other brother does not appeal to them. The chemistry between Evan, Wendy, and Drake is blistering. The sex scenes with Evan, Drake and Wendy all together is scorching but it is also hot to see each brother have time alone with Wendy. I wish this book was a bit more flushed out. It seem rushed in some places and agonizing slow in others. The main and secondary characters were interesting and realistic. Overall, this was a good book. I enjoy reading Ms. Crescent’s book and I hope we get to see these characters again in the future.

I really enjoyed Desire by Sam Crescent. Wendy decides to go to a club. She ends up at club “Desire”. Is where her dads shop used to be before he lost it to the club owner’s. Her dad has told her so many things about them that she immediately knows she shouldn’t like them. But upon meeting Drake she can’t stop her feelings for him and very soon she is falling for not just him but his brother Evan too. She feels really guilty because of her dad. The brothers set out to change her mind and she finds out that sometimes the truth isn’t all it seems. Desire has hot characters, a great story and hot desires. This is a great erotic read.

I really enjoyed this book! Drake, Evan and Wendy kind of have a past. You will have to read the book to find out. It is a must read!