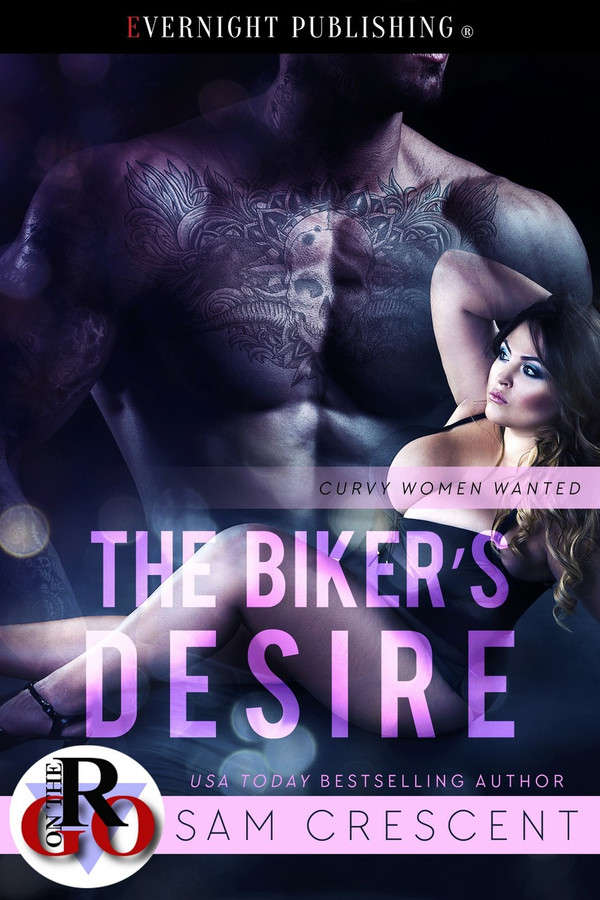 Rock has watched Adele Sparks for some time now. She’s a cleaner, and there’s not one thing he doesn’t know about her. Anyone who comes to his clubhouse, he has checked out, and she’s squeaky clean. Adele’s not like any woman he’s ever known. She doesn’t try to flirt with him, nor does she judge the club. He wants the curvy cleaner, and he’s going to have her.

Adele likes Rock, the impressive Prez of the MC that she works for. She’s overheard the women talking about him and what he can do in the bedroom, but she doesn’t believe it. After all, she’s been married before, and the only orgasms she’s experienced were at her own hand.

Then Rock tells her what he wants. He wants her naked. He wants her thighs wrapped around his waist as he takes her hard. Pleasure like she has never known is within reach.

But can she keep her heart in check? After all, there’s no way a man like Rock will want forever—or will he?

Today had been awesome. She’d gotten on a bike and was eating ice cream with Rock.

She scoffed. “I was married. I got divorced. Fucker cheated on me, but no big deal. It wasn’t a shock or anything.”

“Are you dating anyone?” Rock asked.

“Me neither.” She finished her ice cream, and tried not to look at him. Her body was coming alive with the heat from his, and she was struggling.

He was a guy she worked for.

She enjoyed cleaning his clubhouse. It was filthy, but by the time she finished, it was always so clean. She loved that. The feeling of accomplishment, even if she did find some scary stuff.

Rock climbed off the bench and moved toward the end of the bench closest to her. She gasped as he grabbed her thighs and spun her around, drawing her closer to the edge. He stepped between her thighs, bringing her aching pussy close to his cock.

Her cheeks heated. It was one thing to imagine, and something different to hear him say it.

“This is really out of the blue,” she said.

“Yeah, well I’m not the kind of guy to wait all that long. I want you. You want me, and I think we should give in and not fight it. What do you say to me taking you home and fucking your brains out?”

Sam Crescent does it again with The Biker’s Desire, the sixth book in her fabulous Curvy Women Wanted series. I loved the characters in this one. Rock took me by surprise. For a big bad biker he was really sweet and funny. The best thing about Rock was how he wasn’t afraid to show his feelings for Adele. Now, I always end up falling in love with the, let’s just call them anti heroes, that Sam Crescent brings to life in her books. Let’s face it, though. Most of them get off to a rocky start, but not so much with Rock. I fell in love with him on the first page. He really was my dream man. Adele was great too. She started off as a strong woman and remained that way for the entire story. I like it when the heroine knows what she wants and isn’t afraid to say it. I loved how richly the characters were described in this book. It helped to give them life in my imagination. Sam Crescent kept the drama low in this well put together plot with only a few tense moments in the plot. I liked that aspect since it left more pages for the sexy times that this author happens to write so well. It’s a hot story that was engaging and very well written, as well.

Sam Crescent knows her curvy women and the sexy bikers who adore them and with this swift story she proves just how much she knows. Rock is by no means a shy man but I enjoyed how he&#039;s taken his time with Adele which shows he might be a big bad biker but he can be thoughtful and kindhearted. I&#039;m a complete sucker for a romantic man and romance depends on just who is on the giving and who is on the receiving end. The actions Rock takes are swoon worthy in my opinion. He is the perfect mixture of rough around the edges and soft where it counts. Adele is a fantastic heroine. She&#039;s happy in her life even though things have not necessarily worked out how she wished. I love how vibrant and happy she is. Honestly I would love to be friends with this woman. She is neither a wilting flower nor a life of the party kind of girl. She&#039;s more live and let live. I like how this story, has action and romance, heat and heart. If you enjoy MC stories this is one for you! The Story: As prez of his MC Rock has been able to watch Adele as she&#039;s cleaned the club over the last few years. Her abundant curves call to him but she&#039;s not like any of the women he knows so he&#039;s been waiting until he thinks she&#039;s ready. ANd no he&#039;s about to give her the ride of her life.

This is the sixth book in Sam’s Curvy Women series, one of my favorites from her. It’s also a novella, but it’s not short on storyline. Adele Sparks is a cleaner, and one of her jobs is cleaning the clubhouse of the Satan’s Demons MC. The prez of the club, Rock, aka Rock Hard, has taken notice of the curvy woman and wants to make her his. When Adele’s car goes out of commission, he makes a deal with her. He’ll have one of his guys look at her car if she agrees to go out on a date with him. Though she doesn’t feel she fits in at the club, she agrees to go out with him. What will the club say? Love, love, loved this short by Sam! The sex was off the charts and the characters were engaging. Sam is an auto buy for me, though I know I still have lots of her back books to read. And boy, I’m looking forward to it!

Very nice story, I wish it was longer, minor got the job done. Couldn&#039;t tell there was an age gap til it was mentioned. I love the dynamic and the honesty of Rock.

To say this book is good is not enough. Rock &amp; Adele fill something in each other and make them be their best. An all consuming love.

I Voluntarily reviewed a copy of this book I loved this one. I don&#039;t know if its because of the awesome cover or because it&#039;s about a biker, lol I loved that Adele was just a down to earth kind of women and I loved that Rock was a Hot, sexy alpha biker, who wanted her and he took his time to have her. I always feel like these books at the end always makes you feel like you want more!! Sweet, funny, sexy and so freaking HOT!!

I love this series!!

I always want more when I&#039;m done with Sam&#039;s newest book! Rack and Adele did not disappoint... Their chemistry is explosive!! Of course Rock&#039;s possessiveness is always delicious and Sam always give you just want you need! Love these curvy woman series! I&#039;m excited for the next book!

I think it&#039;s my fav in Curvy Women Wanted series. I was drawn in from first page and I needed to finish in one go. I love Rock. Or Rock Hard. You could goes how he got his road name. ;) But seriously, the man is amazing. Sexy, protective, loyal and caring. Adele hit a jackpot with this biker. I hope we will be back in this clubhouse. I wouldn&#039;t mind to find more about Nails. And on the same time to see more of Rock and Adele.