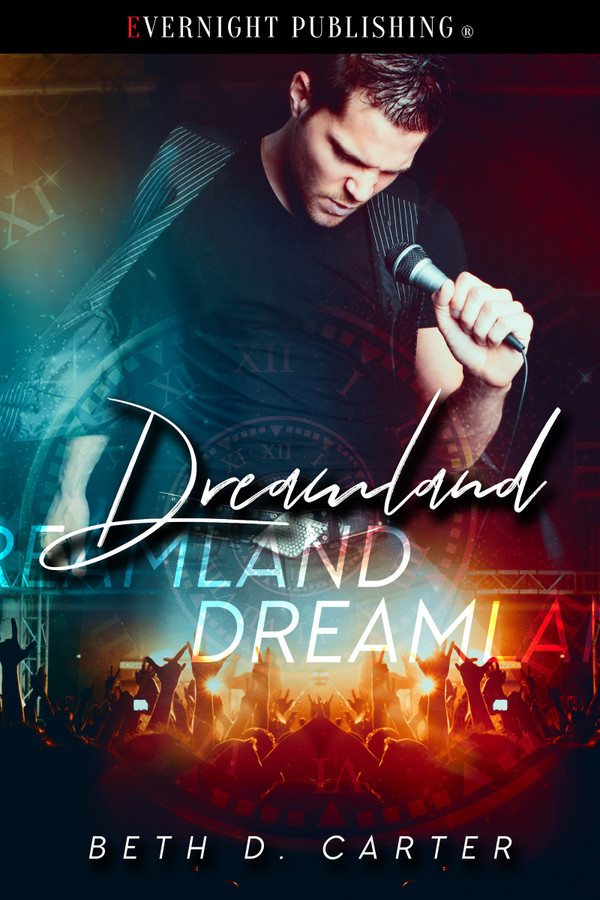 Dicen Burke had it all. As lead singer in the world famous rock band, Dark Army, the world lay at his feet. But the path to super stardom warred with a painful past and during a performance the demons haunting him finally descended. Unable to stop the self-destructive path of alcohol and drugs, when he fell, he fell hard.

He wakes up in a world he doesn’t know. The Twenty-first century rocker is now in the 1920’s, lost and bewildered. He’s taken in by Juliet Fox, a beautiful woman trying to be a positive influence in her brother’s wild lifestyle among the Hollywood Motion Picture elite.

Dicen does his best to adapt, and with Juliet by his side, he discovers a world that offers him a clean slate. But when he’s pulled back to the present, separated by time from the one person that gives him a reason to live, will he find a way to push past his demons as well as find Juliet again?

“Aren’t speakeasies illegal?” he asked her.

Tonight, she wore an all-white sleeveless dress that fell into a drop waist where pleats fanned out every time she turned. A string of pearls wrapped around her neck once and then fell past her breast. Her dark hair contrasted sharply with the white hairband, where a large white feather stuck up on the side.

“Shh!” she hissed, looking around. “Yes, they are, hence the big six standing guard. If the buttons show up, they give a signal and all the hooch disappears. It’s not illegal to dance.”

“You called me big six once,” he commented. “What does that mean?”

“Tough guy, as in the six-cylinder engine.”

One man walked up to them, and Juliet handed over some bills. Once the money had changed hands, they were greeted with a grin and the entrance to the speakeasy. Immediately to the left, a long bar rested, with several men in white shirts, white aprons, and black ties working, trying to keep up with the order demands. The area in front of the bar was packed with people, to the point that individual movement was impossible. Dicen kept his hand firmly around Juliet’s as they made their way slowly through the throng. The crowd seemed to sweep them along, and they moved like driftwood upon the ocean, all the while Dicen tried to keep his eyes open for Thayer.

Women were dressed in variations of style, from flapper girl to matron. Most men wore hats, coats, and ties. The crowd thinned toward the back and pushed forward, breaking free of the cattle pen so a dance floor opened up. Several tables with chairs surrounded it, and against the far back wall a quartet, consisting of piano, clarinet, trumpet, and cello, played.

He hadn’t known what to expect when Juliet announced they were going to a speakeasy, but it certainly hadn’t been this. He’d envisioned a dark, dank hole in the wall where people chugged bathtub gin strong enough to strip paint off walls. Instead, he discovered a place where wild and catchy music allowed people to jitterbug around the dance floor. The bright, fun atmosphere invigorated him, and all Dicen wanted to do was hop on stage and bang out a few melodies and share in the revelry.

Keeping hold of Juliet’s hand, he skirted the dance floor toward the platform stage. Bunting hung from the ceiling and swept outward to hook on various points near the bar, forming a sweeping cave-like setting that helped the music resonate. He didn’t know how to dance like the other people, but he pulled Juliet close and swayed with her to an upbeat, modified version of present-day slow dancing. As a musician, he knew rhythm, so he made sure to keep his hips in tune with the beat. He stared down into Juliet’s smiling face and felt the last wall around his heart shatter.

Dicen’s dream life has turned dark. He’s all about sex, alcohol and losing control. A handful of pills lead him not to getting high but to the past? He must be dreaming! But the beautiful woman that takes him in seems very real and he’s slowly falling for her. This was silly and freaking fantastic. A rocker, Dicen is sent back in time, or is he? The descriptions of that time frame were lovely. I really felt like I was in that era. When he meets Juliet, she helps guide him through this foreign world. As time passes, they develop feelings for each other. I really loved their romance. It was a sweet, slow sizzle that really got the heat going. When he returns to the present day, he finds a spitting image of Juliet. Now a whole new dance begins and Dicen is determined not to screw this up. Dreamland is predictable and silly and I loved it! You should totally be reading this romance.

Dicen is the lead singer in a famous rock band. His path to stardom comes with a price and a painful past. Drugs &amp; alcohol has taken him in a destructive path which has him fallen hard. So hard that he wakes up only to discover he is in the 1920&#039;s and everything is different. He meets Juliet Fox, she is a sweet beautiful woman who is trying to keep her brother straight. Dicen does his best to fit in and soon discovers that this could be a fresh start to a new life a life with Juliet. Just when he starts to really adapt he is thrust back home into the chaos that was his life. Now he will do whatever it takes to get back Juliet. I really liked this story. Dicen &amp; Juliet are different and comes from different times, however it just shows that love knows no bounds and I like how well Dicen adapts so quickly to his new life. The story definitely had the wow exciting factor and I thought it was a fresh storyline that I would really liked to read more like it. A hit for me!

We all wonder sometimes where our soul would travel once we are dead. Or what one dreams of when they are in a coma. Heaven? H*ll? Or some other place in time? Dicen found out first hand as he traveled down that rabbit hole. Little did Dicen know that walking off the stage during a concert to get another snort of coke and popping two pills would send him back in time to the 1920&#039;s. Two weeks of blissful love and finding his soul mate then tragedy strikes. Dicen wakes up and is confused. Pushed back to the present he only has one person on his mind. Juliet. Jules was hired by Dicen&#039;s manager for three months to make sure he stayed clean and sober so he could return to the stage. She would be a thorn in his side 24/7. Dreamland is a unique story that keeps you glued to the pages as a rock star learns to cope with his demons of his past and present.